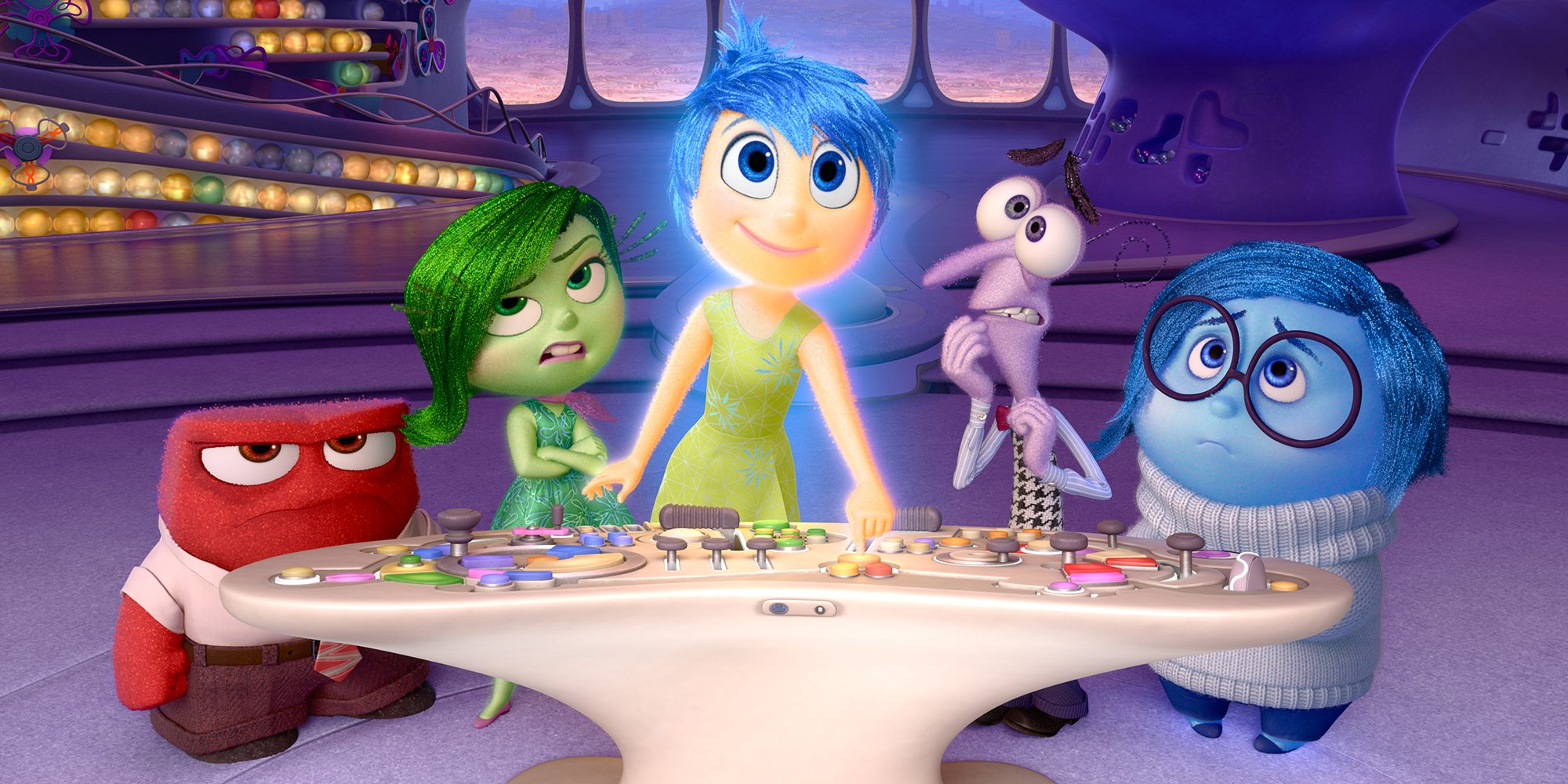 Pixar is hard at work on its next film, Inside Out, which stars Amy Poehler, Phyllis Smith, Bill Hader, Mindy Kaling, and Lewis Black. The film opens June 19 and will be accompanied by the musical short Lava. A short time ago, I visited Pixar’s Emoryville campus to interview Director Pete Docter and Producer Jonas Rivera.

This was my second visit to Pixar; I had previously toured the studio in 2012, when they were working on Brave, so I was pretty excited when I was invited back as part of my visit to Skywalker Ranch last month. The Pixar campus is the kind of place that makes you want to stop by the HR office and apply for a job within minutes of entering the building.

Naturally the first stop was the gift shop, where I stocked up on t-shirts and coffee mugs for the family. Then we entered the screening room to meet Pete Docter and Jonas Rivera. 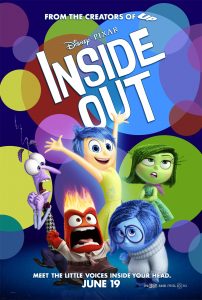 Inside Out tells the story of a young girl named Riley, who is uprooted from her Midwest life when her father starts a new job in San Francisco. Like all of us, Riley is guided by her emotions – Joy (Amy Poehler), Fear (Bill Hader), Anger (Lewis Black), Disgust (Mindy Kaling), and Sadness (Phyllis Smith). The emotions live in Headquarters, the control center inside Riley’s mind, where they help advise her through everyday life. As Riley and her emotions struggle to adjust to a new life in San Francisco, turmoil ensues in Headquarters. Although Joy, Riley’s main and most important emotion, tries to keep things positive, the emotions conflict on how best to navigate a new city, house, and school.

The idea for the film came from Docter’s daughter, Ellie. “My daughter, if you saw Up, she was actually the voice of young Ellie in that movie. She was around nine when we recorded that, and she was actually kind of a lot like that character. She was like, she’d walk up to strangers and go, ‘hello,’ and talk to people, and spunky and bubbly. And then she turned 11 and 12 and things changed a little bit. And she got quiet. We talked to her teachers, who’d say, ‘Ellie’s a quiet girl.’ And we’d go like, ‘Who are you talking about?’ So obviously you guys know what that’s like. … It’s sometimes very difficult, both from the kid’s point of view, and the parent’s point of view. And that was really the origin of this film, trying to figure out what’s going on inside her head, you know?” 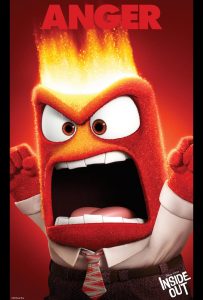 “We had this idea of using emotions as our main characters,” Docter explained, “Anger, Fear, Sadness, Disgust, and Joy. And what that led to was this great research that we got to do, talking to psychologists and neurologists, and really deep dive into how and why we think and feel. A lot of that research has shown up in the film, and then of course we made some stuff up too, ’cause it’s supposed to be fun to watch.”

“It was really that idea that we’ll personify the motions,” Rivera added. “When we pitched it to Disney and to John Lasseter, we talked about like our version of the Seven Dwarfs. You can really do something in animation, you only do it in animation, really get these characters and do something really unique, specific and fun. And it just really appealed to us. We love, obviously, animated movies, the classic Disney animated movies, and we talk about that a lot. Like what was it about those movies that lasted forever? Why do we still talk about Lady and the Tramp and Dumbo, and these movies that we grew up with? They’re very emotional, and, you know, Up is very emotional, we hope. And, and so we thought, we like movies that are emotional, what if we made one about emotions?” 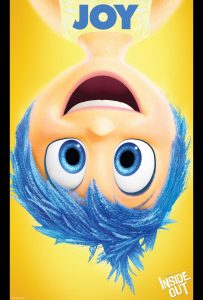 “So, it ended up, not only do the characters lend themselves to great animation fun, but we had this amazing cast. Amy Poehler, who’s just fantastic, and really what made me fall in love with her is her Smart Girls blog, which my daughter was looking at,” Docter said. “And she does such great work in reaching out to kids and letting ’em know that growing up is hard. And so she really resonated with the film. As did Mindy.”

Inside Out has been in production for about five years; Docter describes the timeline by saying, “here’s one benchmark: while we’ve been making this film, Bill Hader has had three kids.” 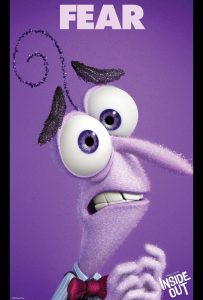 Docter introduced a few scenes from the film, saying “Riley has new friends, new surroundings, all sorts of things we’re getting into. What happens along the way is that Sadness starts to become more and more pushy and starts to get in the way. Joy is wanting to make sure that her kid stays happy, and so she tries to relegate her to the side. Tensions escalate, things get worse and worse to the point where both of them end up getting sucked up out of that tube and sent out of headquarters, way out into long term memory. So that means the only emotions that are driving are Disgust and Fear and Anger, which may explain some things about teenagers. At any rate, that’s what happens in our film.” 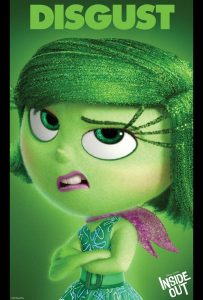 I told the filmmakers that we had received some complaints about the first trailer, that it seemed to rehash the cliche of the uninvolved and clueless father who doesn’t listen to his family and leaves most of the parenting to his wife, who treats him like one of the children. Docter responded that “a single scene is not a whole movie,” and explained that the father character is actually very involved in his family, but in this scene, we catch him daydreaming, not paying attention, and we all have those moments; even the best parent has lapses, and in this case, the character is based on himself.

When asked how his daughter felt about being the inspiration for Inside Out, Docter said “She’s been playing it pretty coy. She’s 16 now, so she’s not been really forthcoming with exactly what she thinks of it. But I think she’s having a good time with it.” 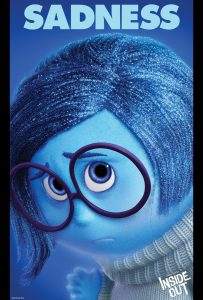 Rivera adds, “Yeah, I think she enjoys it. I mean you kinda kept it quiet for a while that it was, it wasn’t literally, but it was an observation of her, and then we started talking about it, and pitching it, and referencing. I mean, we look for these films, as we make them, for things that are truthful and real, or coming from at least a real place. It doesn’t matter what people think of ’em, we can say, ‘Well they’re observations of our own family and friends and life.’ So, there’s no getting around it.”

Rivera summed up the film by contrasting it with Up, which he described as “a love letter to our grandparents”; Inside Out, he said, is a love letter to their children. “This is the echo of that, about our kids and growing up, and it means something to us. So it’s very personal, and we’re very proud of it.”

We were also treated to a screening of Lava, the short that will accompany Inside Out in theaters. I previously saw Lava at an earlier press event last June. It’s a beautiful little film.

Writer-Director James Ford Murphy told where he got the inspiration for Lava, saying “I’ve been here [at Pixar] now for almost 19 years and in my last role I was kind of getting a little bored and really wanted to reach out and try something and said you know what, I’m gonna pitch three ideas for short films,” explaining that Pixar’s policy is that anyone can pitch a project, but they have to pitch three ideas, not just one. “I had one rule for myself and that was to create stories about things that I really, really love and things that I connect with emotionally, and ever since I was a kid, I’ve had this tremendous fascination with Hawaii and Volcanoes, as I think most kids do,” Murphy said. “I was a huge Elvis Presley Fan and I think Elvis had a fascination with Hawaii and I was exposed to that, but it wasn’t until my wife and I got married and we went to the big island for our Honeymoon that I really fell in love with Hawaii, volcanoes, and particularly Hawaiian music.”

“Probably about 15 years ago, my wife and I were watching an episode of ER that featured a very recognizable song that I had heard and knew from the Wizard of Oz, but I’d never heard a more hauntingly beautiful rendition of this song, it literally floored me. And I’d go, who is this? [It’s Israel Kamakawiwo’ole.] It just blew my mind and the more I uncovered it, I couldn’t believe the power and the beauty of that song. So then when it came time for me to come up with an idea for a short film I thought, well I have this love of volcanoes and this love of Hawaii and Hawaiian music, what if I could write a song that makes me feel the way that that song did when I first heard it, and feature it in a Pixar short?”

The Pixar short films usually serve multiple purposes, one of which is testing software and finding ways to overcome technical challenges; previous shorts have tested ways to animate hair, clouds, water, and other difficult tasks. I asked Murphy if there were particular technical challenges they worked on with Lava. Well, yes, a lot,” he responded, “the biggest thing that John Lasseter really got excited about was the scale, and that was something that he said that we haven’t done very well in computer animation or at Pixar, like we’re not good at establishing scale. And then the other thing was to have characters that are also your sets, so you have vegetation and rock textures on your characters and how to get that all, you know, coalescing, and then I think the third thing was to also then have effects coming from your characters; [these] were all big technical challenges.”

1 thought on “Visiting Pixar and ‘Inside Out’”