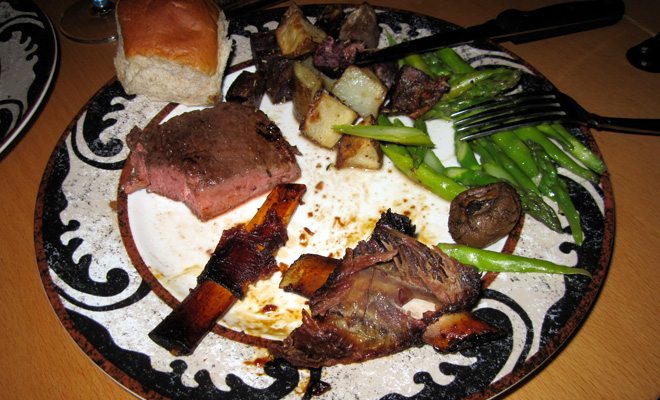 When I had my entire family out to visit Tribune, I knew one of the meals we wanted to have was a steak dinner because I’ve got a whole lot of locally-raised buffalo in my chest freezer. But with eight adults and three kids to feed, I wasn’t really sure how I’d cook that many steaks on my little 23″ charcoal grill. Twitter to the rescue! I got plenty of suggestions: sear them on the grill and finish in the oven, buy a bigger grill, cook them with magnets and — probably the funniest — make a grill out of my bathtub. At least, I think she was joking.

But fellow GeekDad Michael Harrison came through with the most intriguing response: the poor man’s sous vide. “Guaranteed to be the best damn steaks you’ve ever had,” he added. I was a little hesitant about trying a new experiment with that many hungry guests, but after I explained it to my family everyone was curious to give it a shot. Read on for the process and the results!

So the idea of sous vide cooking was fresh on my mind from the last issue of Wired, with an article about Nathan Myrhvold and his crazy kitchen lab. He was mentioned several years ago specifically about sous vide techniques and it was what got him started on his whopping Modernist Cuisine cookbook. Typically for sous vide you need something like this $400 water oven plus a vacuum sealer. You seal the food in the bags, and put it in the machine, which circulates the water and maintains it at a set temperature. The idea is that the food will eventually reach the temperature of the water; it’s impossible to overcook because the meat cannot get any hotter than the water itself, and so you’ll have your steak medium-rare (or whatever your preference) all the way through rather than pink in the center and brown on the edges. (Or, worse yet, cold and undercooked in the center and dry and burnt on the edges.) Once the meat is cooked (and supposedly you can leave it in the machine for hours and it’ll never overcook), you can sear it on the grill or in a pan briefly just to brown the outside, and then you’ll have a perfectly-cooked steak.

So that’s the theory, anyway. The on-the-cheap method eliminates the pricey appliances in favor of a cooler and Ziploc bags. As J. Kenji Lopez-Alt points out on the website, a cooler doesn’t just keep things cool — its insulation can also be used to keep hot things hot. So if you put in hot water, the cooler will help maintain the water’s temperature to cook the steaks.

First, I made a simple marinade and put my various steaks into Ziploc bags with the marinade. I used the tip about submerging the bags in water to squeeze all the air out before sealing up the bags, and then let the steaks marinate for a while.

I heated water on the stove until it was slightly above 140°F (fortunately this is pretty fast on an induction stove). I know Lopez-Alt says 125° for a rare steak, but I was also worried about not cooking the meat enough so I was aiming for around 138°. I dumped it into my small cooler, dropped in the plastic bags and checked the temperature. Still at 140°.

I re-checked the temperature fairly frequently. Since I was using a small cooler and had several steaks in it, the steaks absorbed a lot of the heat. Every so often I’d heat up some more water past 140° and replace some of the water in the cooler with the freshly-heated water. I left the steaks in the cooler for about half an hour before lighting the charcoal in the grill. I think we had another steak that was marinated and then two more with a dry rub that we just cooked on the grill. After cooking those, we seared the sous vide steaks for a few minutes on each side and brought them in.

The steaks all appeared just fine after the grill, though the dry rub steaks did get a little overdone. But the real test was what they’d look like inside. I got out a steak knife and sliced into one of the steaks:

As promised, the steaks were evenly pink all the way through with just a bit of browning on the edges. Everyone agreed that the sous vide steaks were the best of the bunch. Some of the regularly-grilled steaks were dry and tough (particularly those that were undercooked at first and got a second turn on the grill), but the steaks from the cooler were just right.

I should note, of course, that if you’re cooking steaks like this you want to be careful that they’re actually getting cooked fully. I had my steaks in the cooler for a total of about an hour and fifteen minutes, maintaining the water temperature at 140° the whole time so I could be sure that the internal temperature of the steaks had hit that as well. If you’re using lower temperatures or shorter cooking times you’ll need to be very careful to ensure that you’ve killed off any harmful bacteria.

By the way, for those who are curious, the rest of the meal (pictured at top) included roasted potatoes and purple yams, fresh asparagus sauteed with garlic, grilled mushrooms and BBQ buffalo ribs made in a crockpot — another recipe I’d tried for the first time.