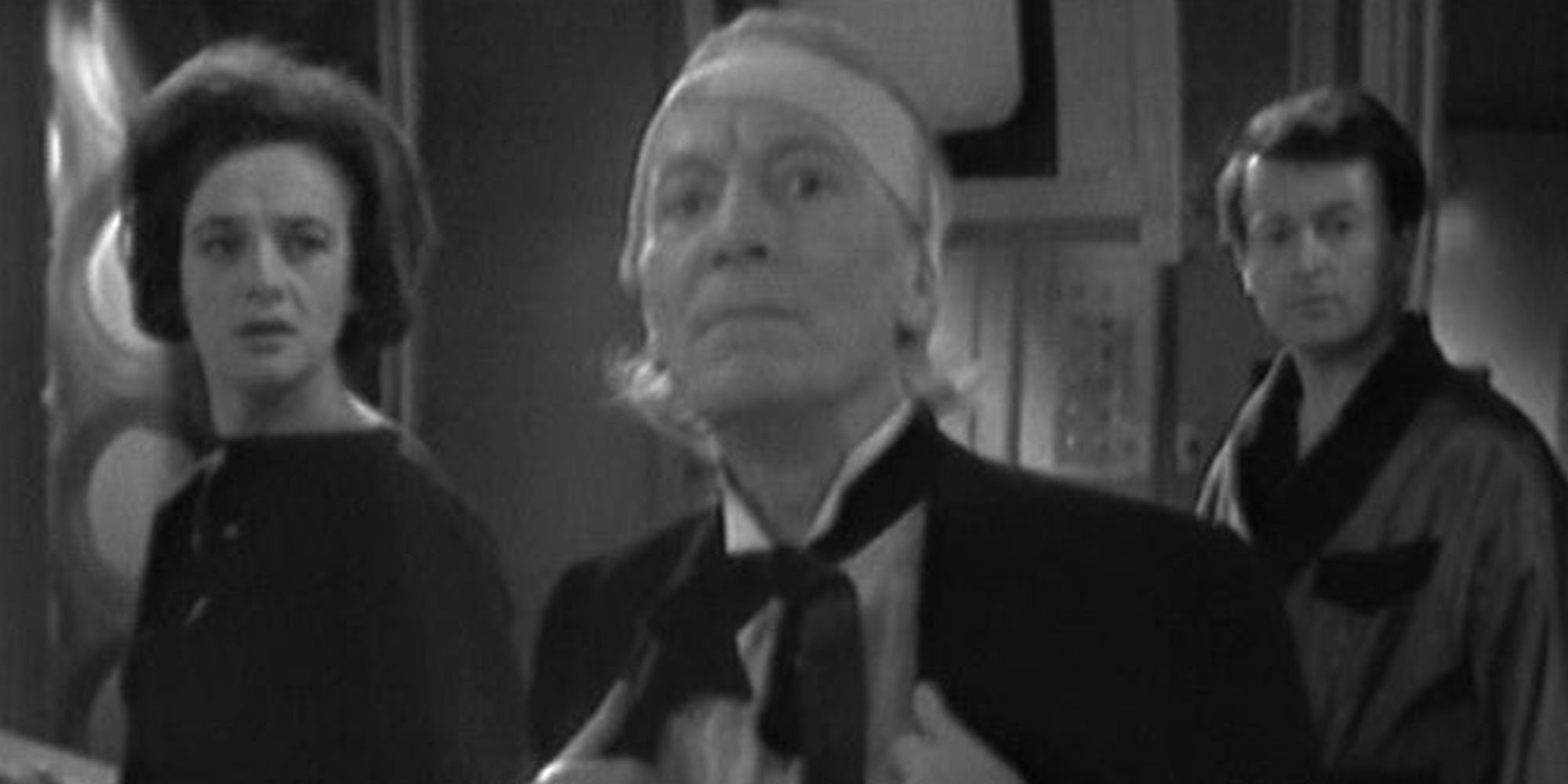 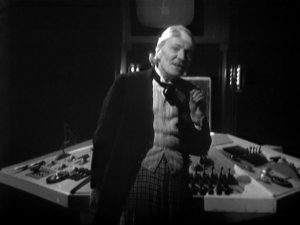 You can catch up on our last review, “The Daleks,” here

Before we get started, I’d like to apologize on the behalf of Jamie and myself for the belatedness of this review. Life, as it so often does, caught up with us. Moving forward, we will endeavor to have reviews out weekly or bi-weekly.

This week we’re looking at “Edge of Destruction,” one of the few two-part episodes in the classic series. This episode, taking place entirely within the TARDIS and featuring only the core actors provides a change of pace for the season. Instead of science fiction danger and adventure, we’re given an almost Twilight Zone-esque episode where, for a while at least, the questions outnumber the answers.

Before reading our reviews we, as always, suggest you watch the episodes. They can be found in the Doctor Who: The Beginning (An Unearthly Child / The Daleks / The Edge of Destruction) (Stories 1 – 3) boxed set, available on Amazon.

The biggest mess in this episode is the acting. There are moments of strong dramatic tension and emotion, but those are surrounded by some of the most egregious over-acting in the whole of the classic series.  Far beyond Susan’s usual over-wrought screams of “Grandfather” and Barbara’s extreme fear reaction, the only explanation I can offer is that the cast was given insufficient time to practice for this episode.

The writing too lends itself to the belief that this episode was a late addition, perhaps buying the BBC time before the more complicated episodes to follow. There are times when the story feels like it’s beginning to fall apart. Characters go from confused to suspicious to level-headed and back to suspicious so quickly that, for a while, it’s impossible to tell who is supposed to be playing the “voice of reason” in a particular scene.

That being said, there were still scenes that surprised and impressed me. The Doctor’s monologue in particular was one of the best pieces of acting done by Hartnell in the show, and one of the more impressive lines for him to remember when one remembers that re-shoots in these days were horribly expensive so they usually only got one chance at a scene.The episode had some great moments of tension and accomplished one of my favorite climaxes in the classic series.

Thinking of the climax always reminds me of the time that I played this episode for the Doctor Who club I founded and ran during my undergrad years. We would watch one episode of the newer series followed by two episodes of the classic series. That day they sat, captured by the tension happening on-screen, until the very moment the Doctor said “the button is stuck.” At that moment the entire room erupted in shouts and choruses of “a button?”

That scene always pointed out to me the beauty of this ending. The story spoke often in broad, sweeping terms. The TARDIS was minutes from complete destruction. The simplicity of the reason behind it all served only to highlight the fact that the TARDIS crew was acting without significant outside influence. The story wasn’t about the TARDIS flying backwards in time any more than the Twilight Zone episode “The Monsters Are Due On Maple Street” is about aliens. The episode was about people and suspicion and fear. The episode was about resolving the animosities that had bubbled under the surface since the very beginning of the show. And that alone is why I content that underneath it all this episode accomplished exactly what a bottle-episode needs to accomplish.

A bottle-episode, any episode where the cast is stuck in a single place and the plot involves little or no outside force, is usually used to establish characterization in a way that can’t be done in a normal episode. When there’s an outside force threatening them, the TARDIS crew will usually stick together, but in this episode they’re forced to deal with exaggerated versions of the same fears and misconceptions that they’ve been harboring against one another since the kidnapping. At the end of the episode we saw bridges being mended between the TARDIS crew and relationships and respect forming that will sustain this TARDIS crew until Susan, Ian, and Barbara’s departures.

Welcome to a filler story. Seriously. This is a two-episode story sandwiched between two much longer storylines, and everything about this one screams throwaway.

If you’re playing the home version of Doctor Who Rewind and watching along, prepare yourself for this one. The entire story takes place inside the TARDIS, the pacing is interminable, the story just plods along, it has some of the worst acting of the show so far, and the characters act insane for no discernible reason.

The in-a-nutshell description of this story is: All four of our characters get knocked out. They eventually come around, but they’re all changed somehow. They’re distrusting and suspicious of one another (even more blatantly than before), and the belief that someone or something has entered the TARDIS passes like a wave through the group–first one of them believes it while all the rest declare it impossible, then another one believes it while all the rest (including the one who just thought the same thing) declare it impossible.

The TARDIS is also acting strangely. For example, the door keeps opening and closing on its own, the water dispensing machine reports that it’s out of water when it’s not, and so on. We’re led to believe that it’s malfunctioning somehow, but we were also led to believe that the TARDIS has been malfunctioning since the very first episode, so I’m not sure how anyone knows.

The Doctor, true to his character so far, has no idea what’s happening. He doesn’t have the first clue why the TARDIS is malfunctioning or how to fix anything. He just stares blankly into the middle distance, “thinking,” and he has an incredibly short fuse for Ian and Barbara, who dare to ask ridiculous questions like “Where are we?”

From the moment they all regain consciousness at the beginning of the first episode, all four of them act strangely. It takes time for them to recognize one another, and they all have recurring bouts of amnesia and psychosis. Susan, especially, acts like someone possessed.

The story slowly becomes a whodunit as all four characters eventually believe an entity of some sort has entered the ship and taken possession of one of them. Accusations fly as each claims the other isn’t who he or she appears to be. From the audience’s perspective, none of them is acting normally, and we begin to think they’re all possessed.

The Doctor even goes so far as to try throwing Ian and Barbara out of the TARDIS. His distrust of them has apparently reached its pinnacle, and he’s perfectly willing to abandon them just to get them off his ship. Lovely.

Then suddenly we’re all thrust onto the “brink of destruction,” yet there’s absolutely no sense of urgency. There’s plenty of time for long, contemplative stares and silence.

The TARDIS is about to blow up, and The Doctor has resigned himself to his fate since he has no idea how to fix the problem. He sends Barbara and Susan to watch the door while he confides in Ian that he’s deliberately not telling the women they’re about to die.

Delicate female sensibilities and all. They might start to panic.

Then Barbara (yes, Barbara) finally pieces the “clues” together and stumbles onto the solution. Much to the chagrin of The Doctor, who is beyond condescending. Even though Barbara has an idea for how to save everyone, The Doctor would much rather stand around and do nothing. No good idea ever came from a woman, right? When he finally realizes that Barbara has the solution, he chooses to monologue and explain everything. Early example of mansplaining, right there.

In any case, this slow response to save themselves betrays the idea that they’re on the brink of destruction with only seconds to live.

So, in the end, the mystery turns out to be relatively simple. (Spoiler warning.) One of the buttons on the TARDIS’s control panel was still depressed. Broken spring. All of the odd occurrences were the TARDIS trying to warn them

So…..nothing was ever really wrong with them. Which means they all acted insane for absolutely no reason. And The Doctor really is a complete asshole who will toss you off the ship who knows where/when without a second thought.

But we already knew that much about our human characters, right? The real development here is with the TARDIS. We see that, to a certain extent, it’s a self-aware, thinking machine. It acted on its own to warn the group of a problem. That is an interesting development, for sure. And one, I’m guessing, that will have lasting repercussions.

I leave you this week with this beautiful bit of patronizing condescension:

Doctor: “You haven’t forgiven me, have you?”

Barbara: “You said terrible things to us.”

Doctor: “Yes, I suppose it’s the injustice that’s upsetting you. And when I made a threat to put you off the ship, it must’ve affected you very deeply.”

I certainly hope this won’t become a trend. The unpleasant sexist overtones of this episode were an unwelcome addition to The Doctor’s character. We’re still early days here, so there’s still hope for The First Doctor.

For us, as well as the majority of the viewing audience, this episode proved as divisive and complicated as they come. Undoubtedly a transitional episode, a type of episode that happens occasionally during the First Doctor’s time and then, mercifully, disappears.

The next episode is the first reconstruction we’ll have to tackle (all will be explained in the next review) and the beginning of the “historicals” that the First Doctor’s era was famous for.

As we go, leave us a comment, what did you think of the “Edge of Destruction?”

Back to School With iPhone and iPad Apps

2 thoughts on “Doctor Who Rewind – “Edge of Destruction””