First of all, Toy Fair is huge. Like, really huge. It’s impossible for one person to see everything. This year’s event (the 112th!) took place February 14-17, 2015, at the Jacob Javits Convention Center in New York City. There were some 30,000 attendees (from close to 100 countries) on hand to mingle with more than 1,000 exhibitors spread out over more than 422,000 square feet of space.

That’s a lot of toys.

It’s important to reiterate and emphasize that I didn’t see everything (see above). But I did see a lot.

I saw a lot of toys, games, collectibles, sports equipment, stuffed animals, books, and cheap knockoffs. Some of it was innovative and extraordinary, much of it was ho-hum and run-of-the-mill, and some of it was truly awful.

By now, you’ve probably heard about some of the biggest announcements to come out of Toy Fair: Furbacca and the Batman Animated Series Batmobile (see below) have probably gotten most of the geeky headlines.

With that said, here’s a rundown of what I found to be relatively new and exciting. Your mileage may vary, but here’s my Top 10–in no particular order. (Stay tuned for full reviews of many of these products.)

I might as well start with this one. Razor has already seen success with its standard fun-as-hell Crazy Cart, but that has a 140-pound limit and is geared toward kids (and “slender” adults). The XL is their adult-sized version with a 240-pound limit–and by the Lords of Kobol is it ever a blast. The Crazy Cart XL is a high-powered drift cart that will find a place on your want list as soon as you see it in action.

Don’t take my word for it, though. Check it out in this video from Razor. Technical specs are up front; the action begins around 3 minutes in.

Yes, I got to test drive the Crazy Cart XL. Yes, it is an incredible amount of fun. Yes, I want one.

The only strike against the XL is the price tag. It hasn’t officially released yet, but it’ll eventually be $799. Ouch. 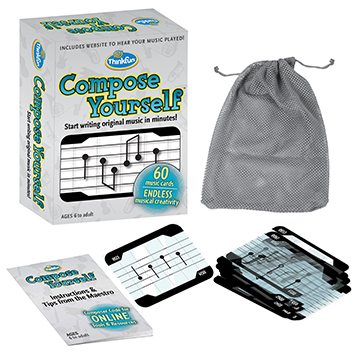 2. Compose Yourself by ThinkFun

Compose Yourself is a “game” (though not really) that allows even the most musically inept person to feel like a composer. It consists of 60 double-sided transparent cards that each depict a series of musical notes across four measures. The cards are designed to be flipped and rotated, so each card can actually be read from four different angles (thereby depicting four discrete note progressions). Then combine the cards to create millions of possible combinations.

What makes this unique is that ThinkFun enlisted some world-renowned musicians to actually play out each card from all four angles. So once you’ve “composed” your piece of music, go online and hear it played by an actual orchestra. Then print the sheet music and play it yourself! 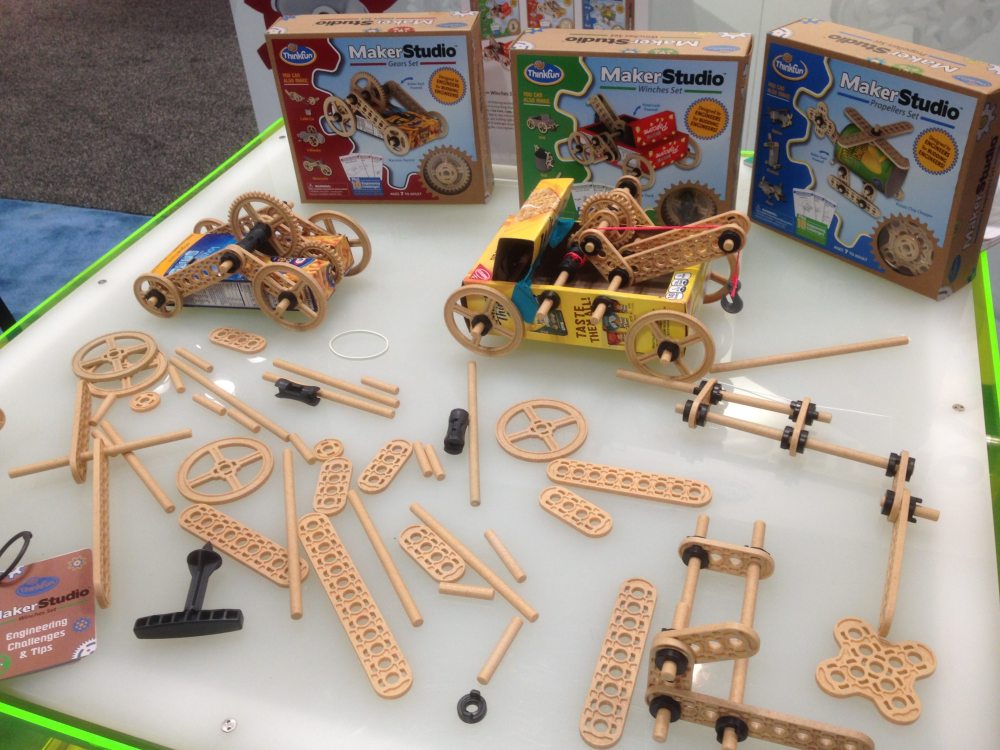 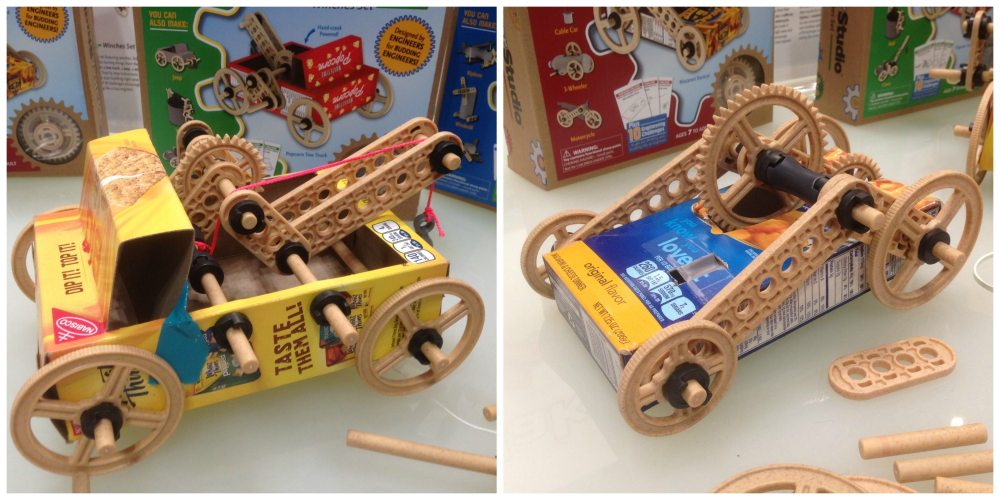 ThinkFun earned a second spot on the list with its new line of Maker Studio sets that are designed to inspire imaginations and a love of engineering among kids. The first three sets are Winches, Gears, and Propellers. Each kit comes with an assortment of raw materials that kids can use to assemble trucks, cranes, cars, planes, and windmills. The body of each, though, is formed from an everyday household item- an aluminum can, a mac and cheese box, etc.

Each build also comes with Engineering Challenges, which challenge kids to experiment with torque, friction, and propulsion to make their inventions even better. This is imaginative engineering at its best, and I can’t wait to get my hands on them. Neither can my daughter.

Start with a cardboard box … end up with Calvin’s transmogrifier. Currently available for preorder here. 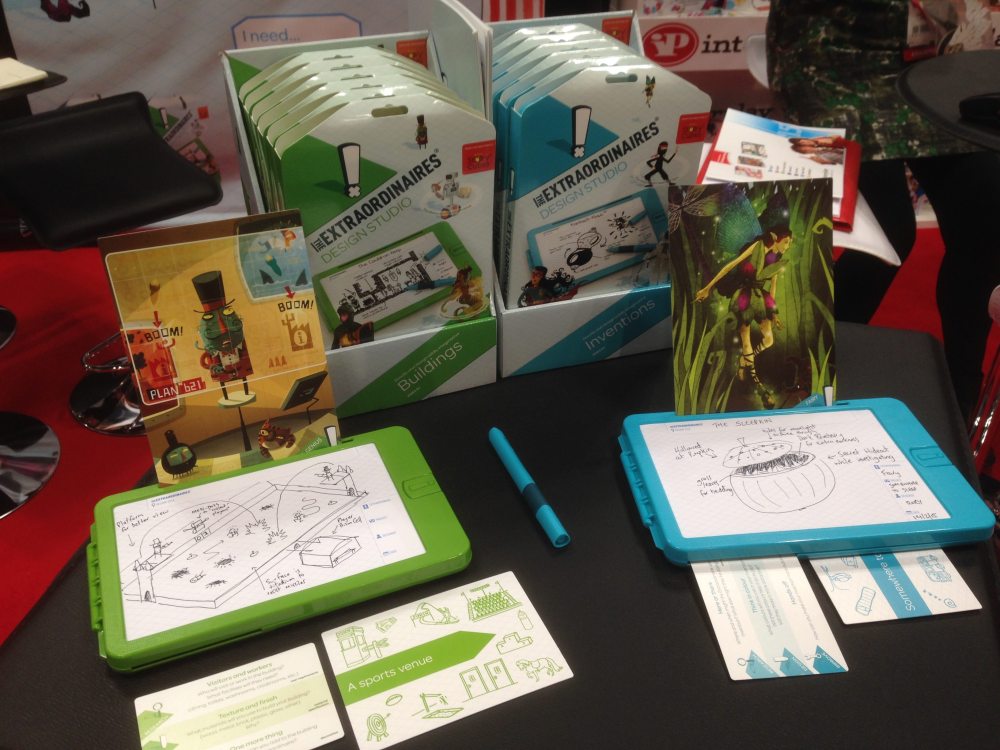 4. The Extraordinaires Design Studio by The Creativity Hub

From the creators of Rory’s Story Cubes, the Extraordinaires Design Studio is a creative thinking game that encourages imaginative problem solving. Joining the deluxe set, which has been out for a while, two new sets focus on inventions and buildings. Each comes with various cards that establish what you’re building and who it’s for. For example, you might need to invent a drink carrier suitable for a ninja or design a hideout for a mermaid.

Draw inspiration from the type of person you’re designing the object for, or look to a Think card for prompts and questions that will help you refine your concept. Again, this is less a “game” than it is an exercise in imagination and creativity. And we can never have enough products that encourage that.

The Extraordinaires Design Studio Inventions and Buildings sets are available for purchase now. 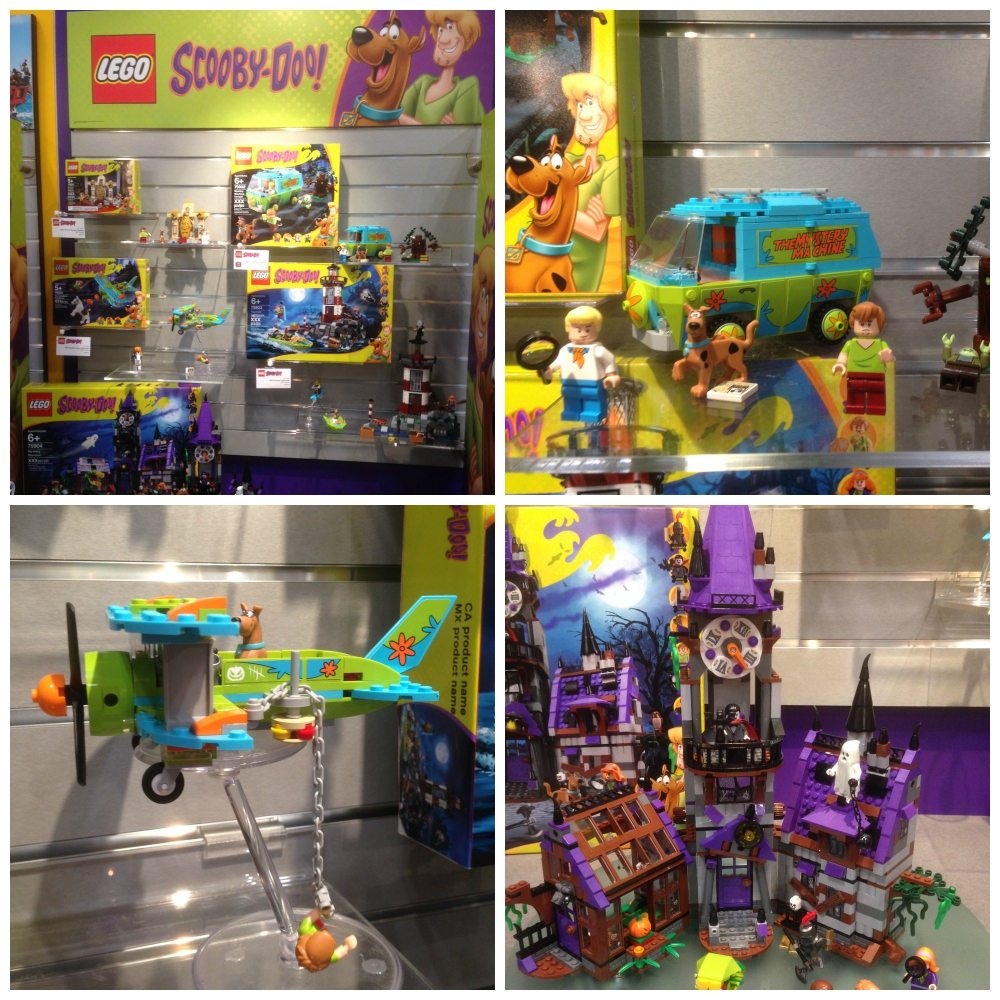 Really, these sell themselves. They certainly don’t need my help. Five sets scheduled to release this fall. 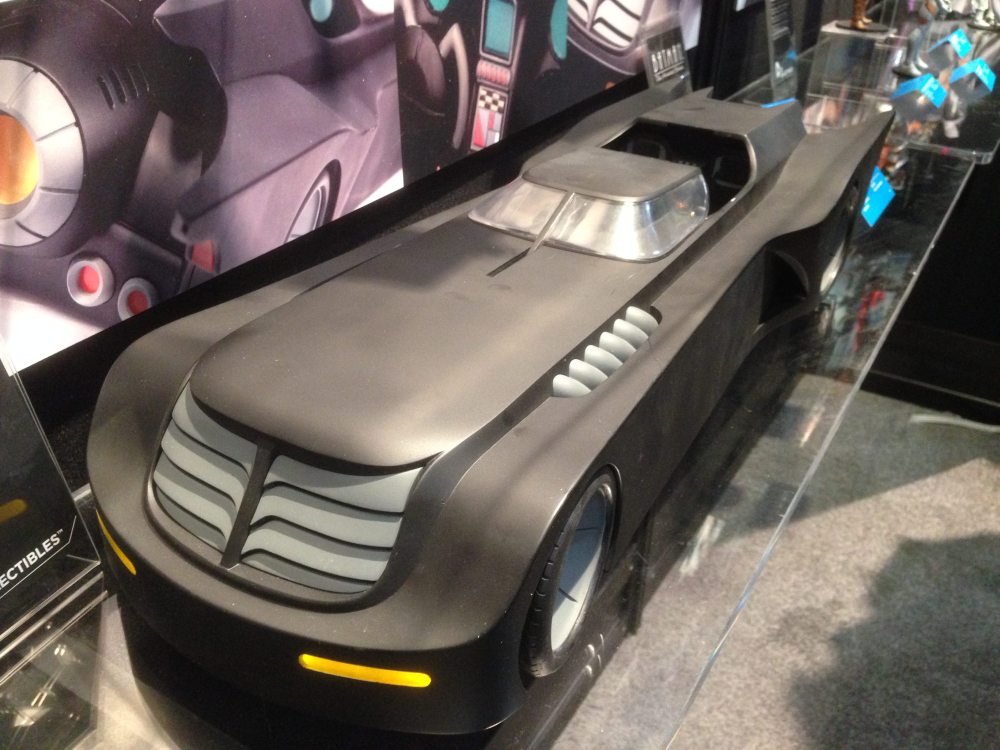 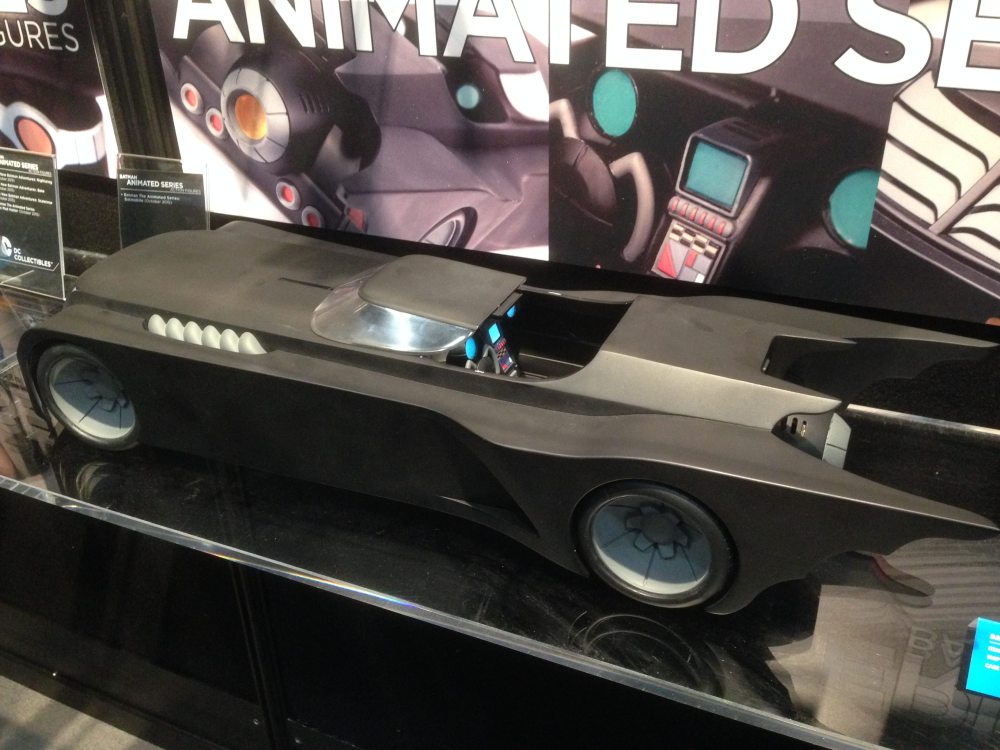 Again, if you’re a fan of Batman in general or The Animated Series in particular, you’ll be buying this. Large enough to fit two action figures (from the BTAS line) side by side, the Batmobile doesn’t come with a whole heckuva lot of bells and whistles. It does light up a little, but come on … does that really make a difference? Just look at that beauty.

Priced at a surprisingly reasonable $99.99, I was assured that the only way they could get it to that price was by agreeing to make a crap ton of them. So there shouldn’t be a shortage that drives up demand and price. I asked several times, and every time I got the same answer: there should be plenty for everyone this holiday season. Full disclosure: I was a Kickstarter backer for Pixel Press’s Floors, and not only was I intrigued by the concept, I was also pleasantly surprised with the final product. They’re back with a similar idea in Bloxels, but this time they’ve added a physical component.

Whereas Floors relied on the user’s ability to draw a video game level, Bloxels introduces a game board and building blocks that have a similar effect. Players use different colored blocks to represent game elements (e.g., walls, enemies, coins, level ups, hazards, etc.), snap a picture of the board with your mobile device, and – voila – your level is instantly designed and playable.

I got to play the demo version the team had at Toy Fair, and even though it’s still in development, Bloxels meets the high expectations it set for itself. Scheduled to release before the holidays. 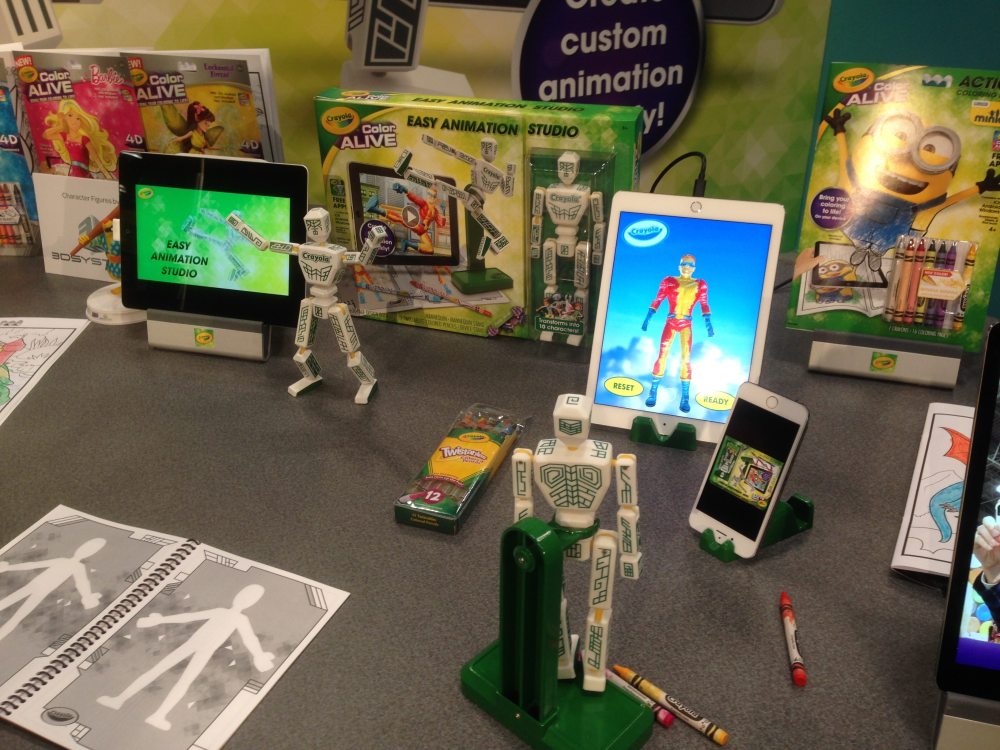 If you haven’t yet seen Crayola’s Color Alive coloring books, get thee to wherever you like to buy stuff immediately. The books come with special crayons that are coded with abilities that come to life in the Color Alive app. For example? Use the “fire breath” crayon on the dragon’s image, snap the finished picture into the app, and not only does the dragon become three-dimensional, but the fire is also animated.

The Easy Animation Studio has taken this concept to the next level with a motion-capture model that kids can animate with just a few clicks and swipes. The coloring book includes outlines of 10 different types of characters, such as superhero, alien, animals, etc. Once the characters are ready, kids can map those drawings over the wire-frame model in the app, add a background, and produce their own animated sequence.

Pixar suddenly seems to be within reach. Scheduled to release this summer. 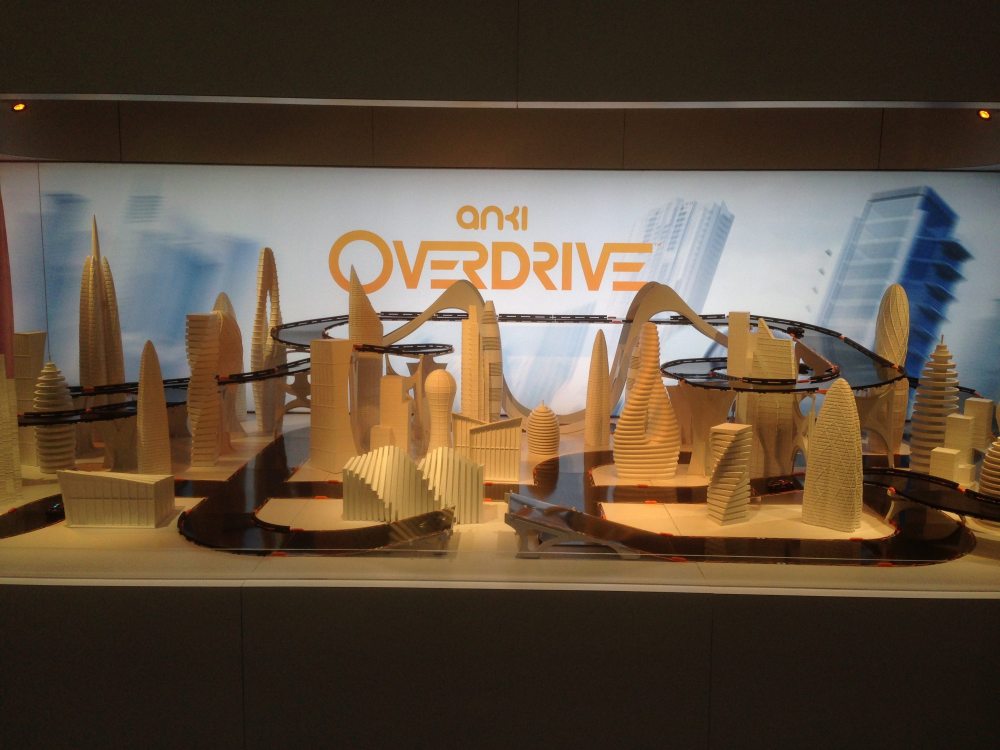 We already brought you a sneak preview of Overdrive, but this was the first time I got to see it in person. Building on Anki Drive, Overdrive is a car racing system with modular track pieces and intelligent vehicles. Think slot cars for the 21st century.

Built-in sensors keep the cars on the track at all times. The cars can also communicate with the game app, which acts like your garage. Use the app to upgrade your cars, select the enhancements you want to enable, and control the car while racing. This might be as close to real-life Mario Kart as we get.

Since the cars can’t actually leave the track, your ability to control the cars is essentially limited to switching lanes. But in our test play, that hardly mattered. Imagine taking a pile of toy cars, giving them AI drivers, and then kitting them out with weapons. This is everything you ever wanted your Hot Wheels to do as a kid. 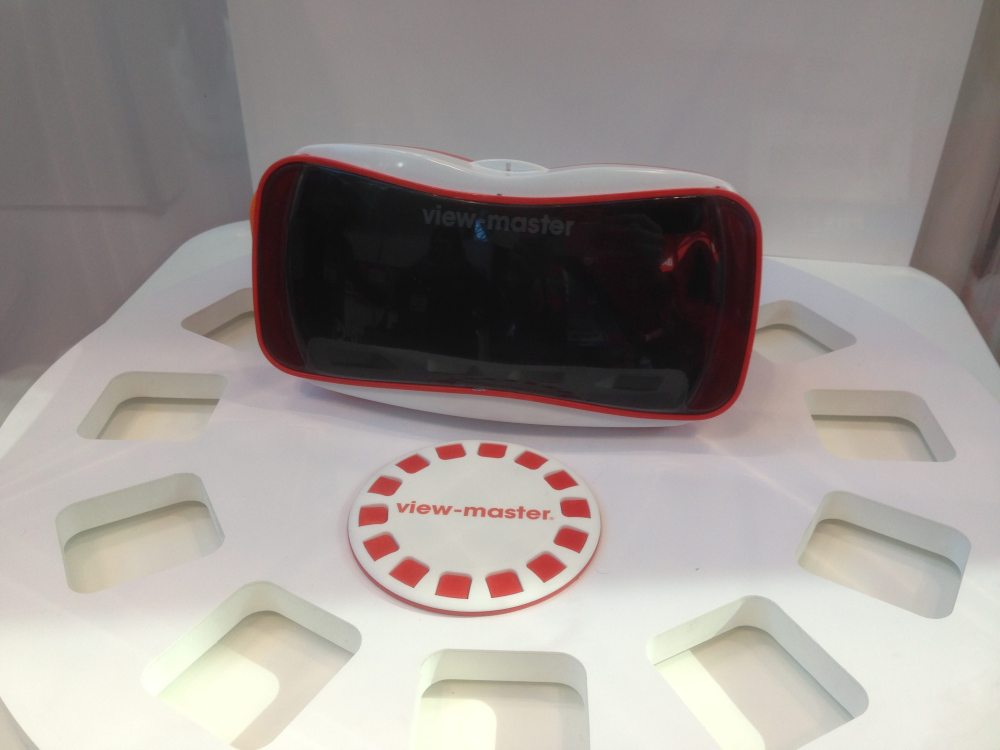 I have to be honest. I debated this one. There’s no argument that the new View-Master is an impressive piece of technology. Mattel teamed up with Google to create a next generation version of the classic 3D viewer. In the new version, you’re taken on a virtual reality trip to various destinations, able to explore your environment in 360 degrees and click on various elements to move, explore further, or just get more information.

The fully functional demo disc I experienced was of San Francisco and Alcatraz Island. I was able to roam around Alcatraz, walk through the corridors and into cells, and turn completely around to see the environment. It was incredibly immersive.

So what’s the problem? Mattel and Google have gotten rid of the flimsy plastic discs that held all the images for old-school View-Masters. These new units are built to hold your smartphone. So you’re basically strapping an iPhone about an inch from your eyes and staring into it.

I’m not a pediatrician or an ophthalmologist, but I’m going to go out on a limb and say that’s not something we really should be subjecting our kids to. Still, the new View-Master is cool, unique, and innovative. So it earned a place in my Top 10.

A Google-a-Day Puzzle for May 29