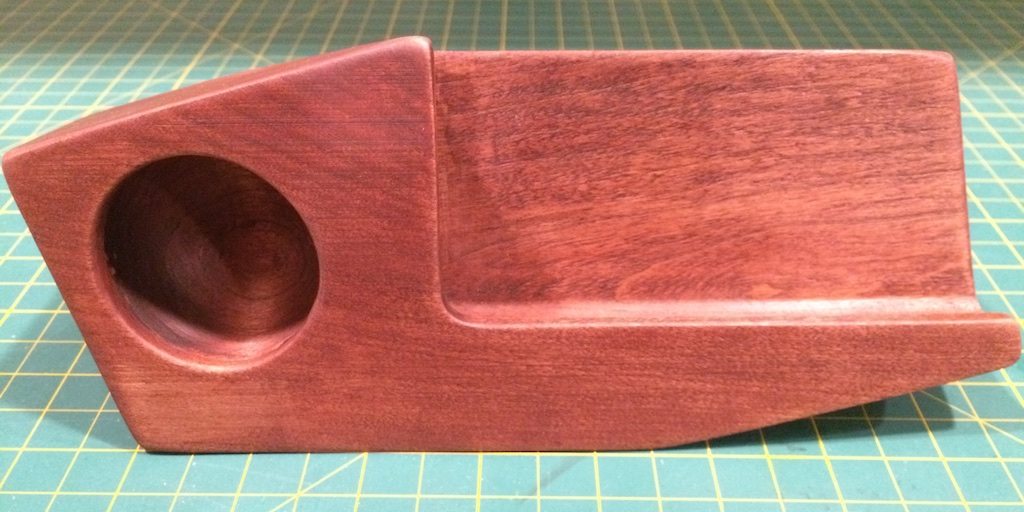 For Christmas, my brother gave me a Koostik Pivot, a simple woodworking kit for making a passive iPhone amplifier. The parabolic cavity acoustically amplifies the phone’s speaker by 10-20 decibels (2-4 times). I find this natural amplification produces a quieter but warmer sound than my iHome. 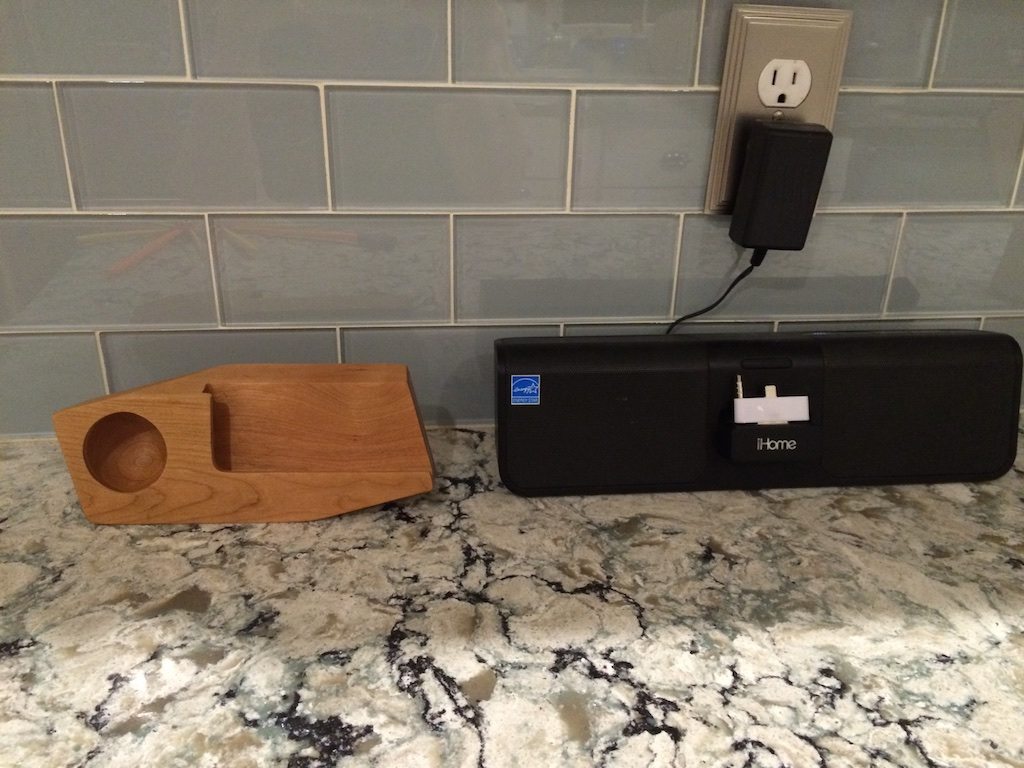 But the real reason to have one is they make cool desk toys that happen to be functional. And for me, the best part was the fun of expanding my nascent woodworking skills.

The new Pivot is similar to the original Koostik but has only one speaker so the phone can sit horizontally or vertically. This also allows several design choices. It comes with three cutting templates – a rectangle similar to the original, an oval, and the angular “advanced” version that I immediately chose, despite being a beginning woodworker.

To build the Koostik, you need sandpaper, wood glue, spring clamps, and access to a saw capable of making miter cuts (ideally a table saw and/or compound miter saw). 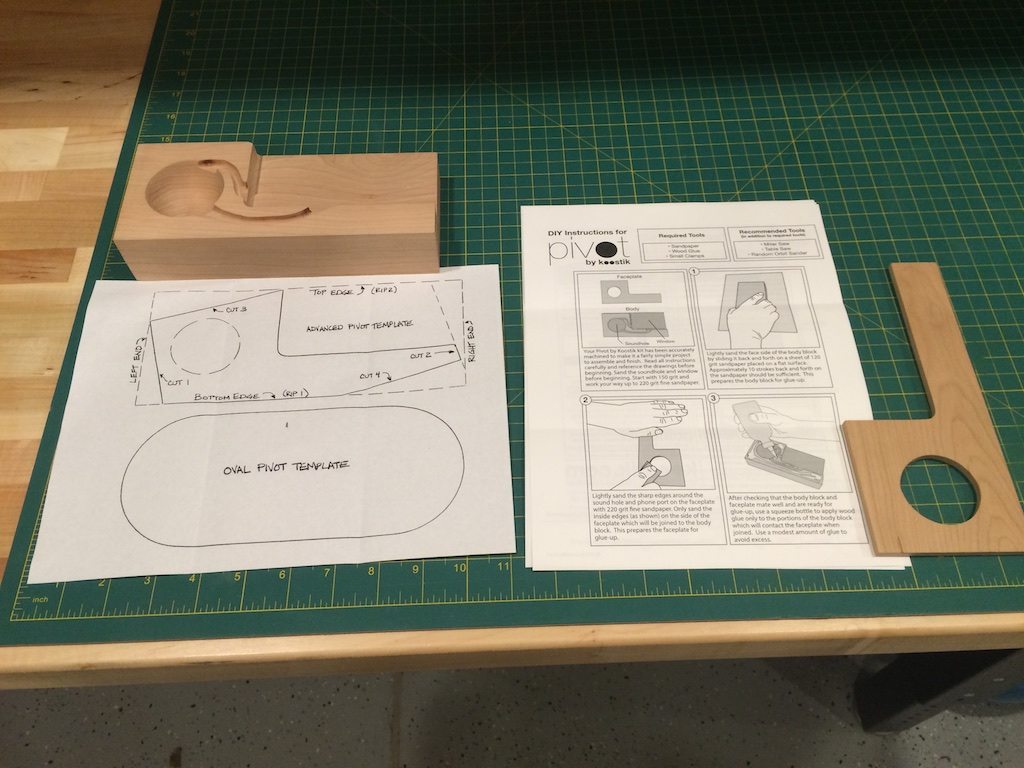 You begin by sanding and then gluing the faceplate onto the main body. 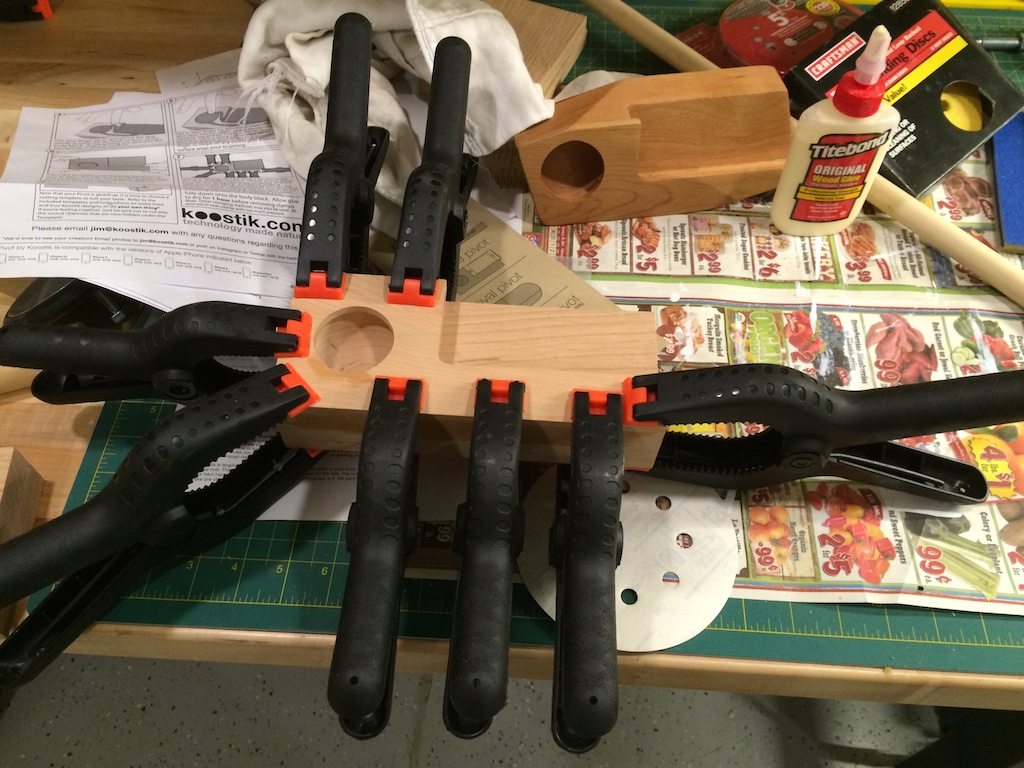 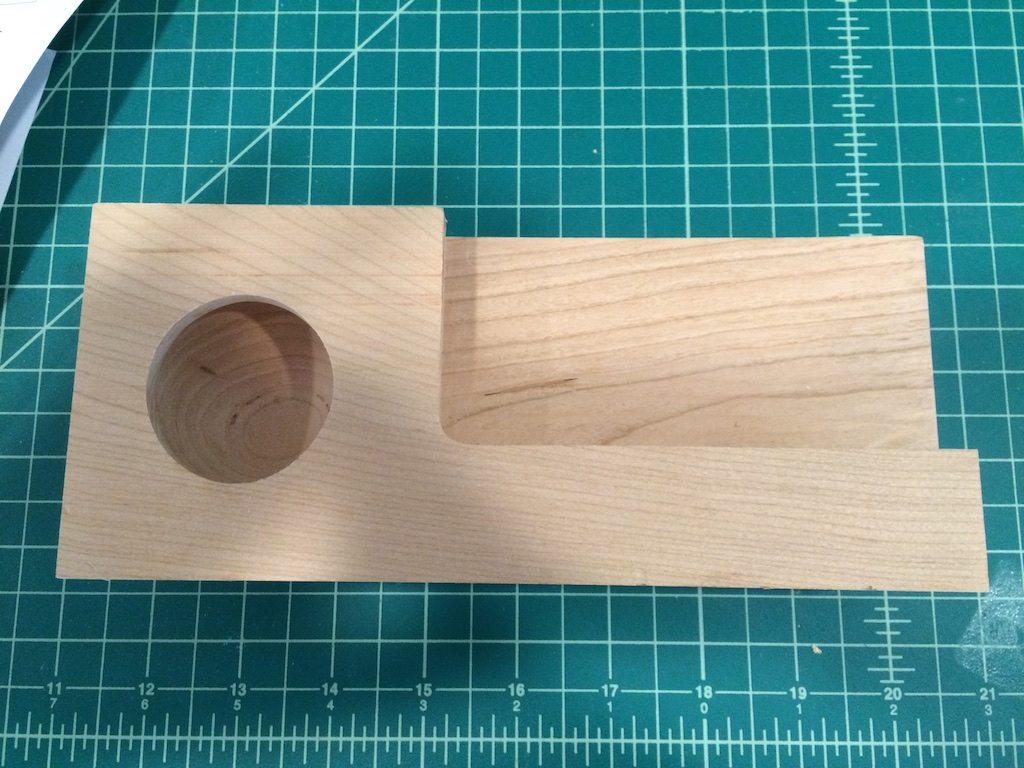 From there, you pick a cutting template to attach (or invent your own). 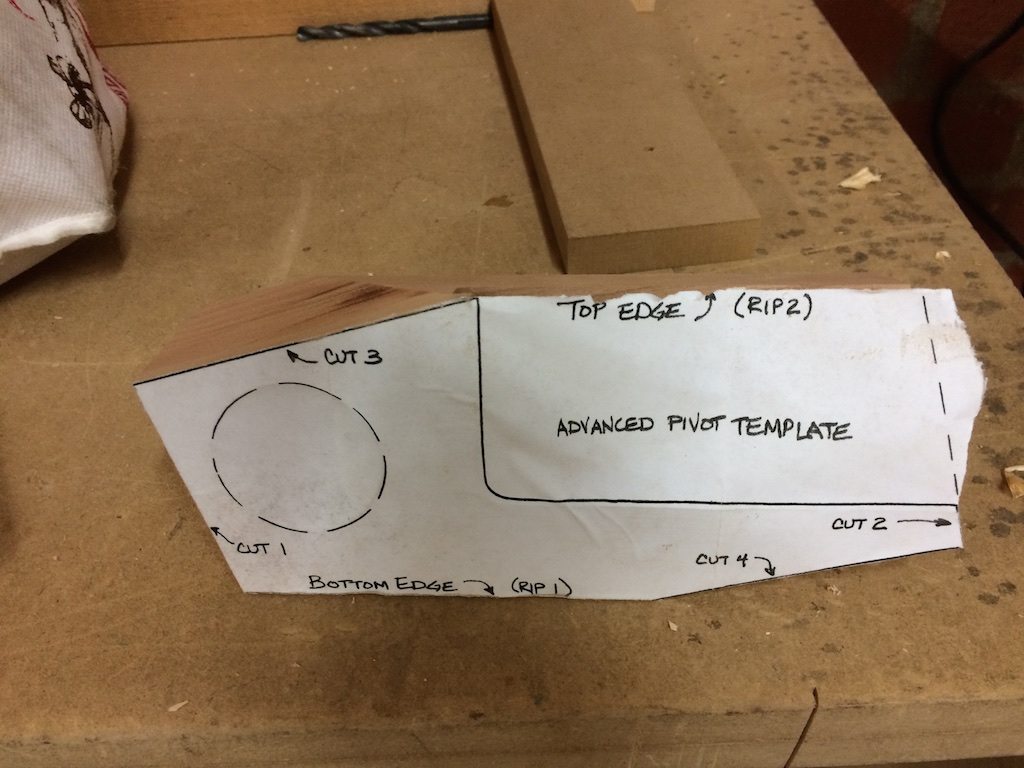 Even the Advanced Template requires only six cuts. I originally attempted to make the whole thing using my MicroMark mini bandsaw, but the 2″ hardwood proved too thick for its 100-watt motor. 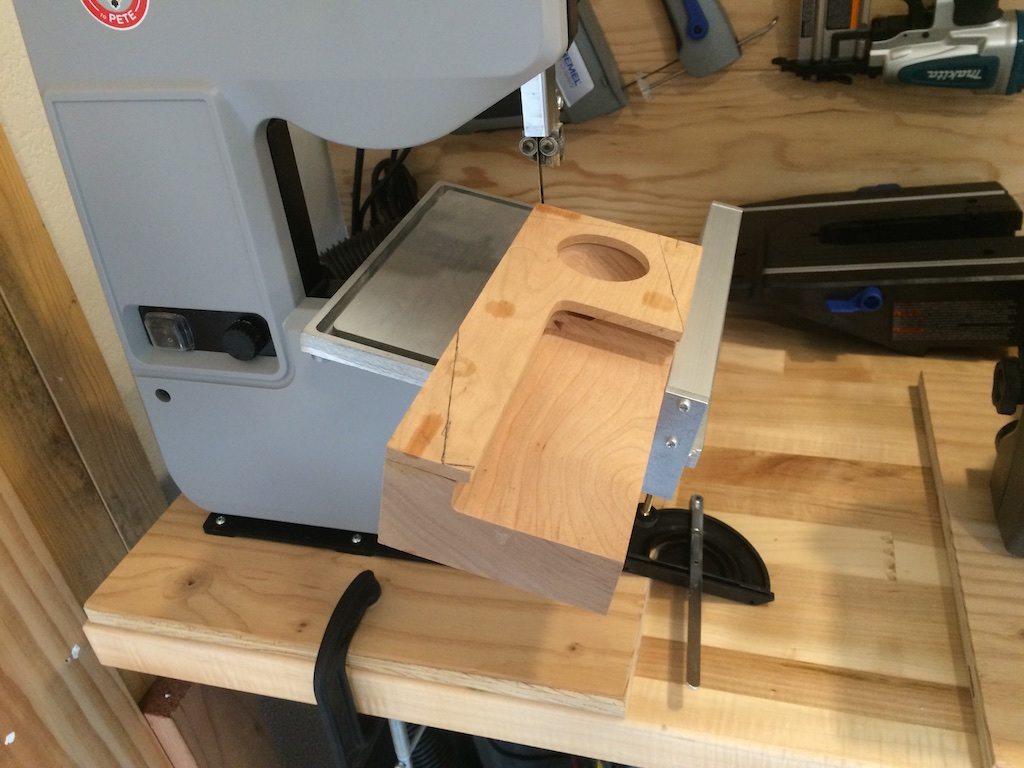 Fortunately, I’m a member of Community Woodshop in L.A., which has a full array of professional tools, so it only took me a few minutes to make the cuts – the first two on a table saw with a 15 degree tilt and the next four cuts on a chop saw at a 15 degree miter. After the cuts are made, you can oil the wood and then add either wax or polyurethane.

Since I’m a woodworking newbie, I forgot to flip the block before the second rip cut, so my top angle is 15 degrees the wrong way! I liked this project so much that I made a second one, this time the normal way. For the second one I decided to try a dark stain. They both work equally well and make me look like a better woodworker than I am. 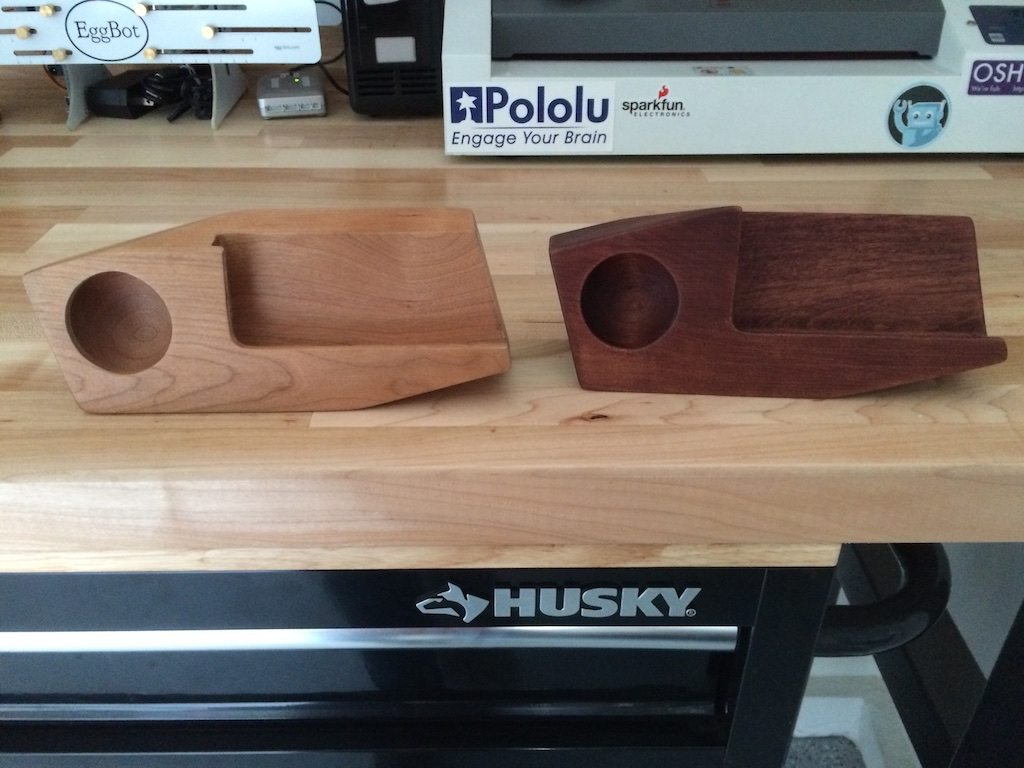 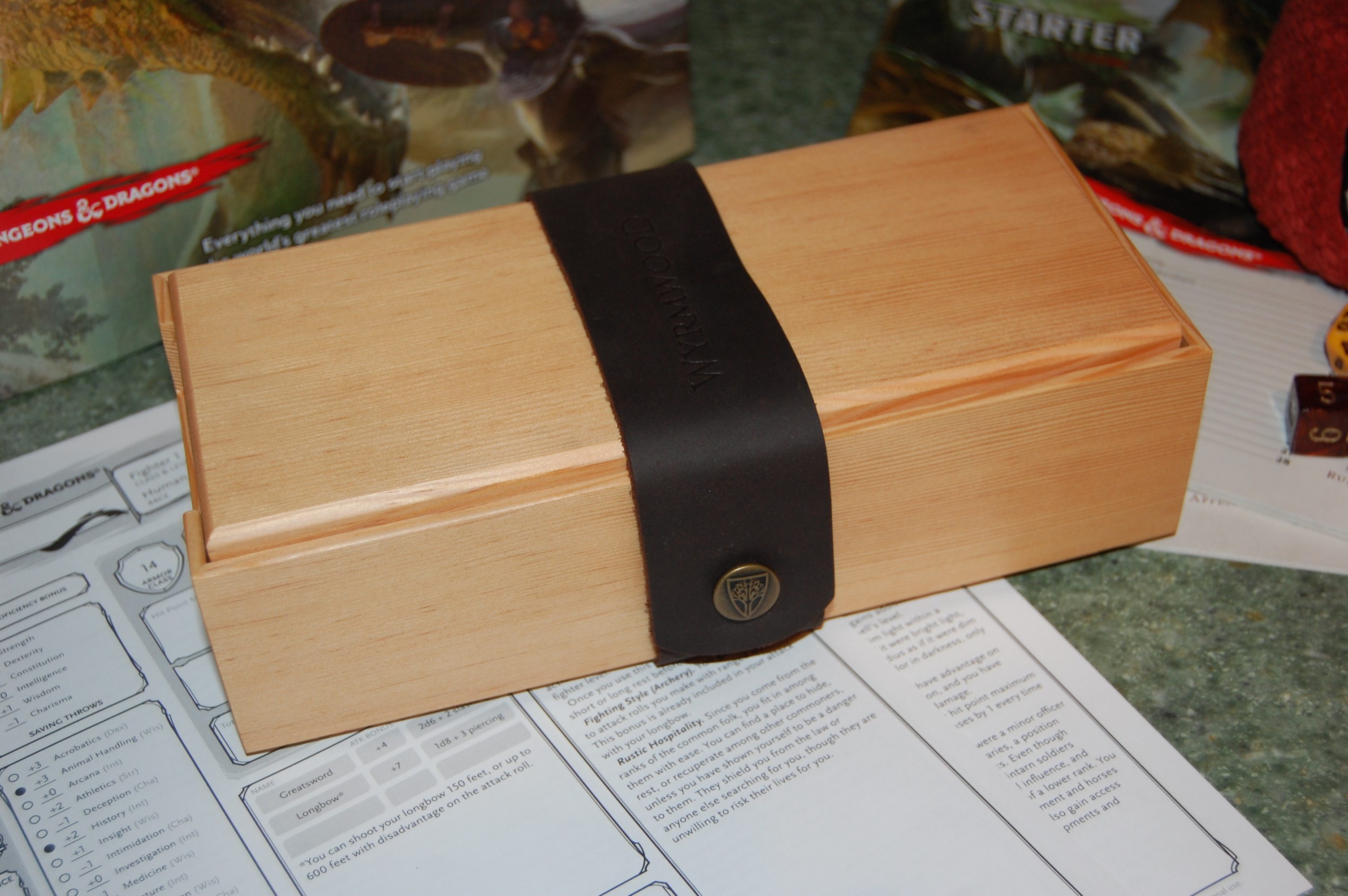 4 thoughts on “Making the Koostik Pivot”