As expected, Nintendo of America confirmed the release of a newly updated 3DS handheld gaming system here in the States during this morning’s Nintendo Direct broadcast. But that’s not to say there weren’t a few surprises regarding this upcoming hardware roll-out.

Whereas Japan got two additional iterations last year — under the less-than-inspired titles of the New Nintendo 3DS and New Nintendo 3DS XL — our territory will only be receiving the latter jumbo model. This means that American fans (like me) who looked forward to enjoying the smaller New 3DS system’s swappable face plates will have to continue dreaming… or bite the bullet and import from another region.

So what does the informed GeekParent need to know about the New 3DS XL? Here’s the skinny from Nintendo’s latest PR blast:

During a Nintendo Direct presentation, Nintendo announced that the New Nintendo 3DS XL system will launch in the U.S. on Feb. 13 at a suggested retail price of $199.99. New Nintendo 3DS XL offers a number of new enhancements designed to offer the smoothest and most engrossing portable gaming possible. New Nintendo 3DS XL features a wider range of controls with the addition of a C Stick and ZL/ZR buttons, super-stable 3D via face-tracking technology and built-in NFC functionality that allows for communication with amiibo figures.

However, while the above mentions release, price point and the primary differences between this hardware configuration and that of the previous models, it does gloss over one important factor. As Reggie mentions at the 36:38 mark in the embedded video below, the New Nintendo 3DS XL will not include an AC adapter. (Though the New 3DS XL will be compatible with any existing 3DS, 3DS XL, 2DS or DSi cable you may have lying around.) While not an unheard-of practice in Japan, this is a pretty weird call for a Stateside release. Consider yourself warned! 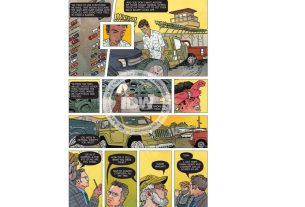 Review – ‘Sleeping Beauties # 8’– What if Women Never Came Back?