For you Marvel fans who’ve been dying to ship the Marvel-verse with Doctor Who, I have some good news. David Tennant has been cast to play the Purple Man in A.K.A. Jessica Jones.

I also have some bad news for you Who-vians. Be prepared to absolutely, unequivocally, hate the Tenth Doctor. 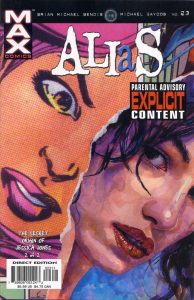 I’m a huge fan of Alias, the comic that the new Netflix show is based on. A big part of that was how they pulled absolutely zero punches. Bad things frequently happened to good people… and then it got worse. The concluding arc of the series was how Jessica Jones fell out of hero work, and the Purple Man was central to that. To say he’s Jessica Jones’ “Big Bad” is to denigrate the evil of the character. The Purple Man is one of the least comic-book-evil villains I’ve encountered in the Marvel Universe. What he did to Jessica Jones in the pages of Alias was shocking because of the base reprehensibility of the crimes. He broke Jessica in a way that was very real and very scary. Published today, the series would come with so many trigger warnings it would make you dizzy. If A.K.A. Jessica Jones sticks to the comics, and Tennant brings his tried-and-true gravitas to the role, this will very likely be the darkest entry in the Marvel TV/Movie-verse.

So make sure the kids are in bed before you binge watch this fall. This one is parents-only.