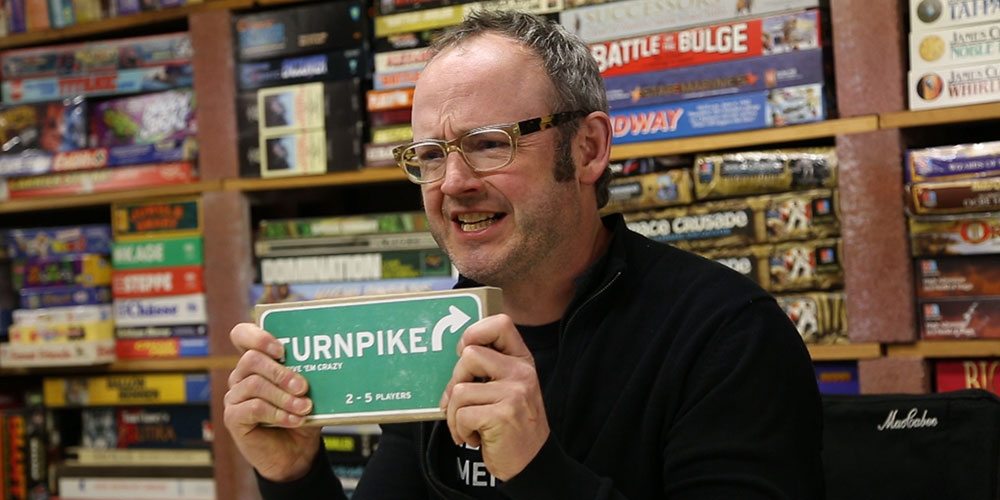 When Douglas Morse ran his Kickstarter campaign in the summer of 2013, he was hoping to cover travel costs to create a film about pitching and publishing tabletop games. It wasn’t until he began filming that his movie gained focus, settling on its protagonist, Randall Hoyt. Hoyt is a graphic design professor who has spent the last five years working on a game about traffic, called Turnpike. Hoyt’s quest to get the game published is highlighted in Morse’s film, The Next Great American Game.

This film is a must-see for anyone who has ever dreamed of publishing a game. As Hoyt travels the country, visiting the Chicago and New York Toy Fairs, GenCon, Origins, and taking meetings with game publishing executives, the movie serves as a class in what to do to get your game produced in cardboard. You get to see what publishers are looking for, what kind of questions they ask, and how prepared you need to be. However, it also provides some really good examples of what not to do as a game designer.

While numerous people give Hoyt solid advice, he ignores it over and over again, thinking he knows better and acting almost disdainful of gamers and the game industry at times. “I’m not a game designer,” says Hoyt, “I’m a guy who designed a game.” As if this distinction elevates him from everyone else. What’s more, his knowledge of games seems pretty limited, which seems self-defeating in terms of interacting with industry professionals.

Some of Hoyt’s behavior might be explained by his bipolar condition, which has a bit of a supporting role in the film. The scenes where he discusses his condition make for an interesting subplot and one that builds Hoyt’s character. He seems to have everything under control and, if nothing else, Hoyt puts a good face to the disorder. He is an obviously intelligent individual with a lot of determination and enthusiasm and even some charisma, and you can’t help but cheer for him a little.

I felt like the best parts of the film were the behind-the-scenes looks into how the board game industry picks games and Hoyt’s incredible drive to see his game published. There is some resolution toward the end of the movie and it gives the film some closure, but in the end, I’m just not sure I cared that much about Hoyt’s game.

Still, there are few films about board gaming and The Next Great American Game is worth a watch if you are into the hobby and, specifically, interested in how games go from prototypes to getting published. I’m not sure it will appeal to non-gamers; the movie gets deep enough into the weeds that their interest may wane enough to look for something else to do. But if games are your thing, put it on your list. It will hold your attention and you might learn a thing or two. What’s more, if you opt for the deluxe version, the movie has hours of extras including interviews with notable game designers like Alan R. Moon, Antoine Bauza, and Matt Leacock and publishers like Steve Jackson and Mayfair Games.

The Next Great American Game is available for download and will soon be available in physical media at FunAgain and BoardGameGeek.

To the GoogleMobile! GeekDads Weigh in on the Future of (Not) Driving

Metroid: Other M Is a Flawed Masterpiece — Spoiler-Free Review