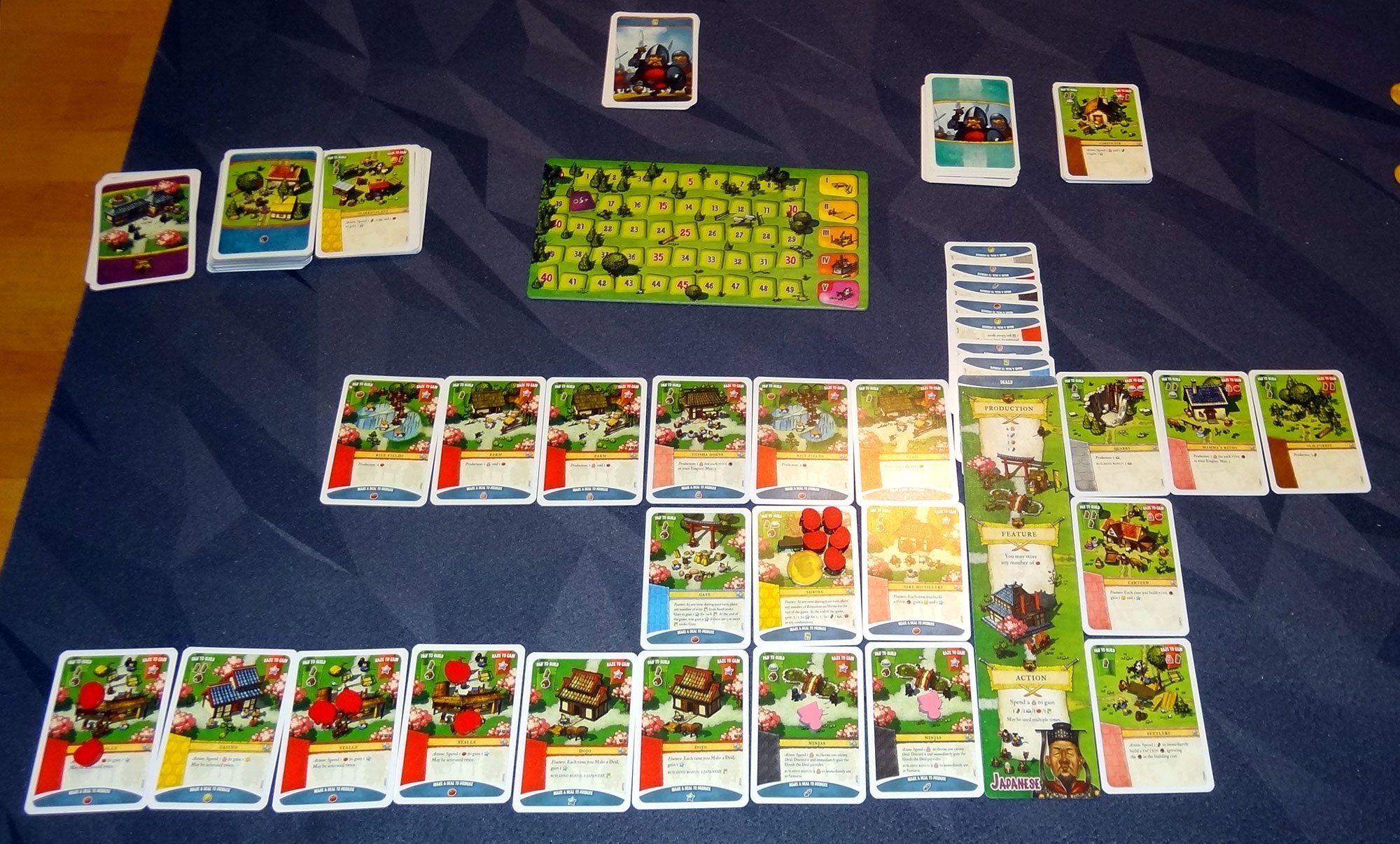 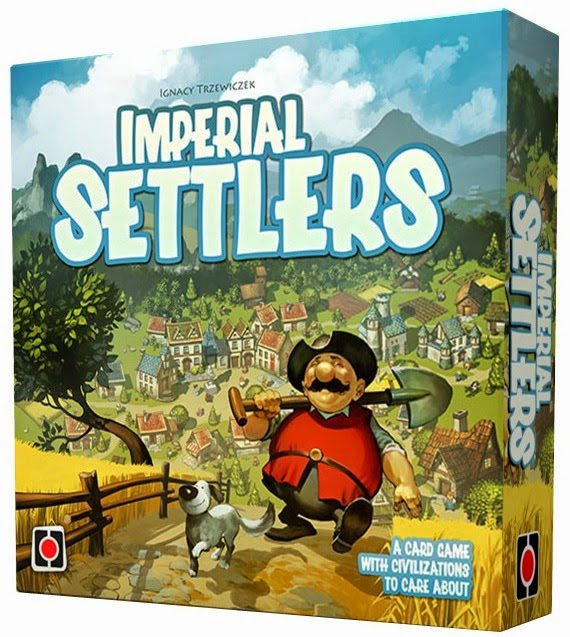 Barbarians, Romans, Egyptians, and Japanese settlers are expanding their empires and competing for land. (How are they all bordering each other, you ask? Shush. Stop asking questions.) In Imperial Settlers, you’ll play as one of these groups and expand your empire.

At a glance: Imperial Settlers is a card game for 1 to 4 players, ages 10 and up, and takes 45-90 minutes to play. (Though that play time can increase when playing with new players, particularly in a 4-player game.) It retails for about $55, though prices vary online.

The card quality is nice, as are all the bits. It does feel a little funny to have a mixture of wooden and cardboard resources, but wooden bits tend to be used more, so it works out all right.

The cards themselves are pretty easy to interpret: cost to build in the top left corner, resources gained from razing the location in the top right, name and ability at the bottom, and “deal” resource at the very bottom of faction cards. However, the text is pretty tiny, so if you wear reading glasses, you’ll want to get them out for this game.

The artwork is pretty fun—little cute versions of the various civilizations and their structures, plus some common folk in all the common buildings. A nice touch: the faction boards are double-sided, with a man on one side and woman on the other. It doesn’t change gameplay at all, but this way you can choose whichever side you like.

The box is bigger than it needs to be and just has a simple cardboard divider inside. The biggest things are the faction boards and scoreboard, which are nearly the width of the box, but probably the game could fit in a box roughly half the size.

The goal of the game is to gain the most points by the end of five rounds—you get points both by building locations and by using them to score.

Each player takes a faction board and the deck of corresponding faction cards. The common cards are shuffled, and all the resources are placed within reach of everyone. The scoreboard is set to one side, with all the faction tokens starting at 0 points and the round marker on 1. Each player starts with a hand of 2 common cards and 2 faction cards. Choose a starting player at random.

Each of the five rounds has these phases: Lookout Phase, Production Phase, Action Phase, Cleanup Phase.

The Lookout Phase is when each player will get 2 cards from the common deck, but it’s done by drafting—once in turn order, and once in reverse turn order.

The Production Phase is when you collect resources from the supply. Each faction board shows a number of goods that it produces each turn. You’ll also get anything produced by Production locations and Deals, though you won’t have any of those on the first round.

The Action Phase is the bulk of the game. Players take turns performing one action each until all players have passed. This is where you’ll build locations, make deals, raze locations, use location actions, and spend workers to collect resources.

The Cleanup Phase is just setting up for the next round. Each faction has one type of good they can store between rounds, and some buildings also let you store goods. Any other resources, raze tokens, and goods must be discarded. The first player marker moves clockwise, the round marker moves down, and a new round begins.

After five rounds, add 1 point for each common location and 2 points for each faction location you have in your empire. (Razed locations don’t count for points.) The player with the highest score wins.

Also, there are rules for a solo variant, which uses the Attack cards. Instead of playing against a dummy player, you try to build up as much of your empire as possible while the attack deck tries to raze locations.

A few years ago, I reviewed a game called 51st State, set in a post-apocalyptic United States. It was intriguing, but also a bit overwhelming because of all the various icons that you had to look up in the rulebook. I kept it for a while, but ultimately ended up selling it off because I wasn’t playing it much. I hadn’t known much about the Neuroshima Hex world it was set in, and didn’t know anything about this Polish designer Ignacy Trzewiczek.

Fast forward to last year, when Trzewiczek’s Robinson Crusoe sold out within a few hours at Gen Con. Trzewiczek himself was running demos of the game, and I was immediately hooked by his humor and passion for the game. I eventually did buy a copy of Robinson Crusoe, and then backed his Kickstarter project for Board Games That Tell Stories, a book collecting some of his blog essays about game design. Reading the story of how 51st State came to be made me wish I still had my copy, because I wanted to take another look at it. But then it turned out that Trzewiczek had taken 51st State and reimplemented it as Imperial Settlers, which looked like it had more user-friendly card design (not to mention more kid-friendly and cheerful illustrations).

I didn’t get to try it at Gen Con but did get a review copy later, and it’s a lot of fun. The core mechanic from 51st State is the way each card can be used three ways: to expand your empire, razed for some immediate one-time gains, or made a deal to produce some goods (but not worth points). However, I think Imperial Settlers is easier to learn—particularly because it doesn’t rely on a bunch of confusing icons, but it also feels like it’s been streamlined a bit.

I like the different factions, because I like games that have asymmetric powers. Each faction has different strengths. For instance, the Barbarians use a lot more wood than stone for building, and many of their faction locations don’t require a foundation to build—but they also don’t start with many resources. The Romans use a lot of stone for their faction buildings, but once they’re producing a lot of stone, there are ways to get bonus points for that. I’ve played at least once with each faction, and I can tell it will take some more plays before I really start to suss out ideal strategies for each one.

There are a lot of fun common locations, too, and the card drafting at the beginning of each round is a nice way to distribute cards so that you have a slight idea of what’s out there. It’s fun to find locations that interact well with each other; in fact, that’s a key part of the game, building an engine that will give you enough resources so that eventually you can score points.

One odd thing is the way that the Japanese faction has a separate set of rules—it means that typically you don’t want to introduce the Japanese except for experienced players, because you have to explain the differences even to the other players, which can get confusing when you’re just learning the game. It would be nice to see another faction that used the same ruleset.

The other downside is that there can be a bit of downtime. Once you run out of resources or cards, you have to pass. It does mean that nobody can raze your locations or otherwise attack you, but if the other players have managed to chain together actions to keep generating more resources, you may find yourself twiddling your thumbs until the round finishes. Some would argue that this just shows that your economic engine isn’t efficient enough, but it can still be off-putting to new players.

The solo game is okay, but I don’t play a lot of solitaire games, so it’s not likely to be something I’ll play much by myself.

Overall, I’ve really enjoyed Imperial Settlers. It’s not too hard to teach, but mastering the game will take some time, particularly just building a familiarity of the cards available in the common deck and the different factions. There’s just enough player interaction through razing and some locations that let you affect other players, but not so much that you feel like you can’t build up. And, as with other building games, it’s always fun to look at your empire at the end of a game and see how much it has grown.

Imperial Settlers is available directly from Portal Games, or you also find it on Amazon or at your local game store. There is also a small expansion, Why Can’t We Be Friends, that’s currently only available from Portal Games, and should be released in the US early 2015. 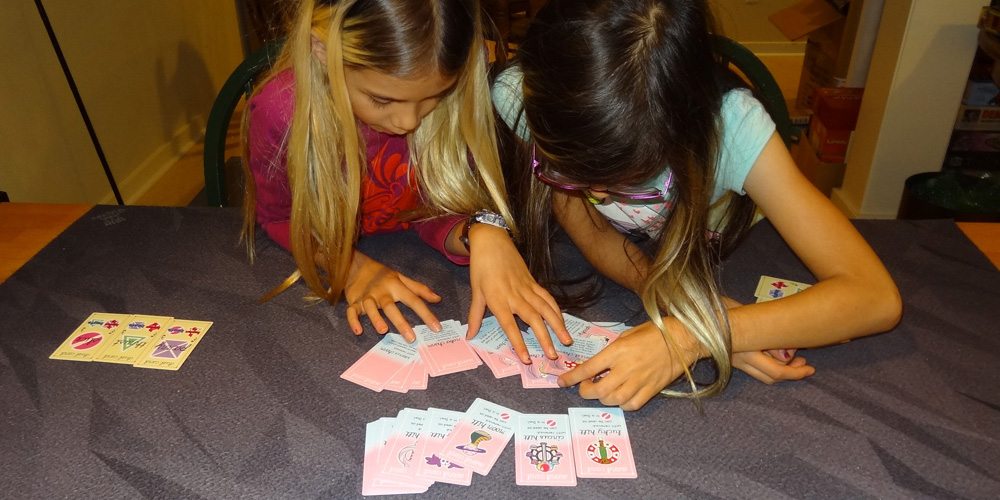 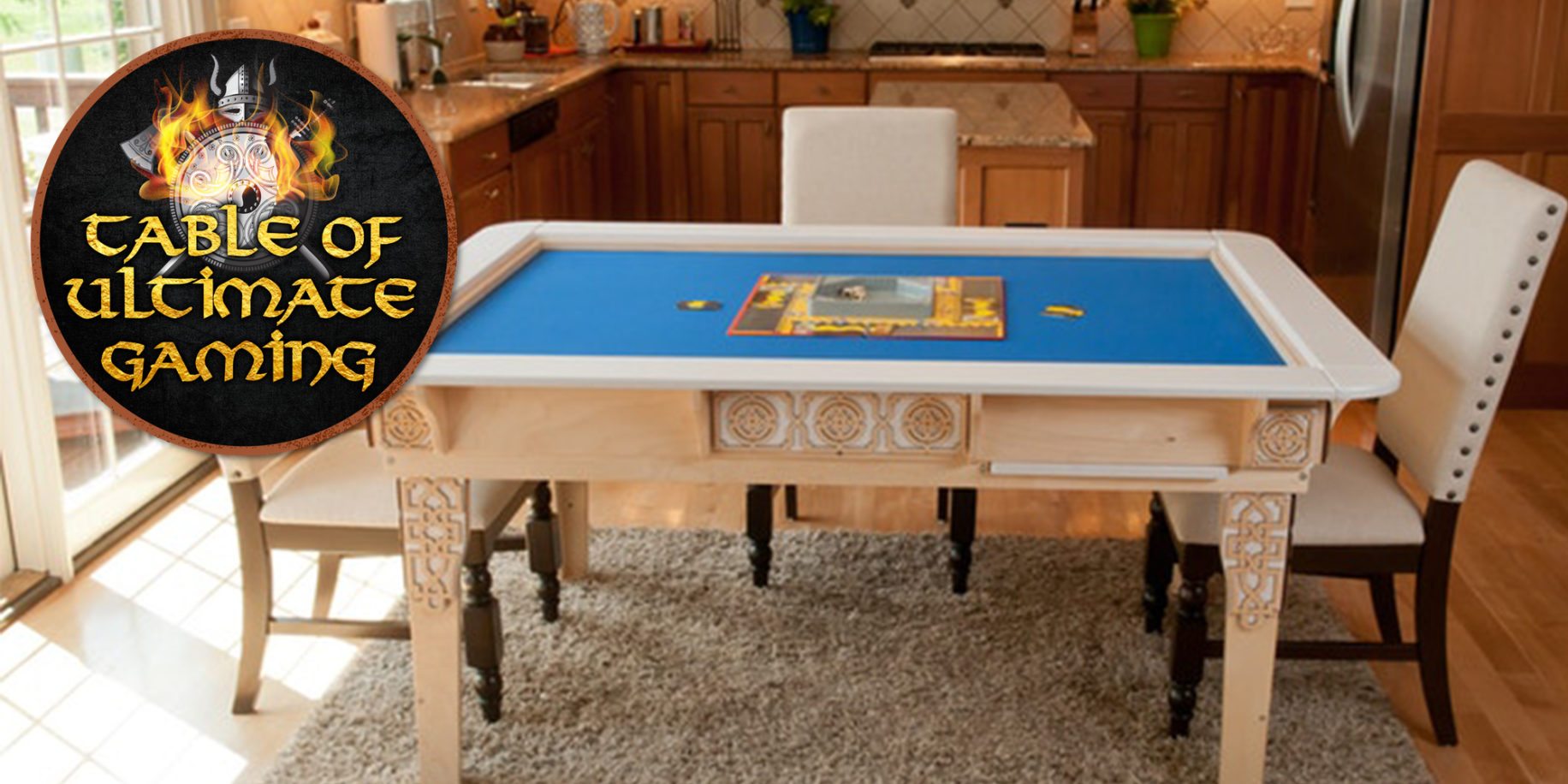 The Table of Ultimate Gaming Launches on Kickstarter