Having played a brief demo of WizKids’ Dungeons & Dragons – Attack Wing at this summer’s GenCon, I was really looking forward to the fall release of the Starter Set. I’ve finally had the chance to play a few sessions, and am itching for more.

Those components, particularly the maneuver templates at the far left, may look familiar. WizKids built D&D – Attack Wing on Fantasy Flight Games’ FlightPath rule system — the same rules that govern Star Wars X-Wing Miniatures Game and WizKids’ own Star Trek – Attack Wing. You’ll note there’s no game board; you can play on any flat surface with at least 3 feet by 3 feet of space, which is the minimum recommended combat area size.

Here are closer looks at the three dragons in the set:

Four phases make up each game round of Attack Wing: Planning, Activation, Combat, and End.

During the Planning Phase, everyone selects a maneuver for each of their creatures. You use maneuver dials for this, and keep your choices secret by placing the dials face down on the table next to  your dragon.

Each dragon has a unique set of maneuvers available, and the selections on the dial correspond to the grids on their maneuver cards. The color of a maneuver’s arrow indicates whether it’s standard (white) difficult (red) or extremely simple (green) to perform. This difficulty has significant bearing on subsequent actions and maneuvers.

The maneuver arrows and numbers indicate bearing and speed, as described by Attack Wing‘s maneuver templates: the 13 pieces of straight and curved “track” which you’ll use to guide your dragon through its flight. And there’s no using the templates for pre-Planning Phase measurement: You have to eyeball it, which comes with a little bit of a learning curve, since there’s a disconnect between the speed units used in maneuvering and the units marked on the range ruler used in the Combat Phase. (For example, a straight ahead move at speed 4 will move your dragon just a bit over six inches, while combat range 4 involves a distance of 9-12 inches. Several times early on, my friends and I would forget to look over at the maneuver templates for planning purposes and think that a move of speed 3 or 4 was going to take us much further than it actually did.)

This is where you’re not only trying to play to your own dragon’s strengths, but to get into your opponents’ heads and guess where they’ll be heading.

(Note: Attack Wing is designed to include both air and ground combat, so the dragons come with both Flight and Ground maneuver dials. We engaged solely in air combat, since the starter set doesn’t include ground forces, and none of us thought landing during a dragon fight was wise.)

Once everybody has their maneuver dials set, it’s time for the Activation Phase.

During Activation, the moves you planned are carried out in ascending order of creature level, which is noted on each dragon’s card. After flipping your dial over to reveal the chosen maneuver, you pick the appropriate template “track” and place one end of it in the notch at the front of your dragon’s base. Holding the template in place, you then move your dragon to the other end, completing the move with the track in the notch at the rear of the base.

If you just carried out a red-arrowed difficult maneuver, you’re now exhausted, so your dragon gets an Exhaustion Token placed at its base. This penalty means you can’t perform any more activation phase actions, or execute any more red maneuvers. You can rid yourself of one exhaustion token each time you perform a green-arrowed simple maneuver.

Without going into too many movement details, the general rule is that creatures can move through each other’s space, but a maneuver cannot end with one dragon’s base overlapping another, so in some cases, maneuvers may wind up falling short of their original intent. If your dragon ends its move completely outside the playing area, you’ve fled the battle and are considered immediately defeated.

Activation Phase movement is followed by declaring an action – unless you’re exhausted – which can include dodging, charging, concentrating, targeting, and feinting, depending on your dragon’s capabilities. Actions are declared by placing a token on your dragon’s base. Each of these can affect the Combat Phase, which is coming up next.

Combat Phase occurs in descending order of creature level, and goes like this:

There’s a lot going on in the Combat Phase, but it doesn’t take long to get into the rhythm of the game and start exploring each dragon’s unique capabilities. For example, Eshaedra gets bonus dice when attacking or defending at long range, and has a cool Lightning Breath weapon that can hit multiple enemies, if you get them lined up right. Other attacks can cover all enemies within a your forward attack arc, or fire a magic missile in any direction. And all the dragons have range two melee attacks (teeth and tails) in their forward and rear arcs.

Time to wrap up this round in the End Phase.

Look around and see whether there are any effects out there triggered during the end phase.

If anyone’s dragon has reached a number of damage cards equal to or greater than its health value – the number in the yellow “heart” area on its card – that dragon has been defeated and is out of the game. (You’re not defeated until the end phase, which means that even if you suffer lethal damage during combat, your dragon may still have the opportunity to attack during its own combat phase. So yes, it’s possible that everybody dies.)

Take back any unspent action tokens, and remove any duration tokens – these are used to indicate time spent between recharging certain attacks, for instance, or damage suffered for a certain number of rounds.

If there are still dragons left to do battle, it’s time for the next round.

That’s the basic gist. The rules lay out the nitty-gritty in detail, and my two fellow players and I did find that in our eagerness to take to the skies, we overlooked a few key details which would have made our first game run more smoothly. (In some ways, the rulebook organization seemed a little counterintuitive, so I strongly suggest reading through and taking note of where the specific sections on things like spending tokens are, because they weren’t always where we expected.)

The starter set also includes a four-page quick-start rulebook for two players, which provides a stripped-down introduction to the basic mechanics. There are no exhaustion penalties, for instance, and there are no actions or activation phase; the quick-start game is strictly planning, moving and attacking.

WizKids’ miniature dragons are nice and large and sharply detailed (although the copper dragon’s metallic sheen lacks the shadowed gradients of the red and blue), making it easy to imagine the trio wheeling and screeching through the air. The only drawback to the components is that their size and top-heaviness can make movement a bit awkward as you try to pin the maneuver template down with one hand and lift the figure by its base with the other. Picking the figure up by the dragon repeatedly resulted in the base and support stem coming detached.

Attack Wing‘s packaging is also a bit problematic, since the box is designed with a giant window and deep display tray for the dragons. The remaining shallow internal tray is pretty useless, given the number of pieces you’ll want to keep separated in this game, so I’m relying on the old standby of zippered snack bags to keep things sorted between sessions.

I really enjoyed the three-player games using the starter set, and we’ve got plans to play more using some of the ground force expansions, and tackling the two adventure scenarios included in the starter set, which add some situational rules and different victory conditions. I could also see creative dungeon masters working a session or two of Attack Wing into an ongoing D&D campaign, just for fun.

This marked my first foray into the type of tabletop game which can lead down the path of miniature addiction, if you’re into that kind of thing, but I do think the playability of the starter kit can stand on its own for awhile, depending on how often you play. I ordered the Green Dragon expansion with a birthday gift card, just to add one more to the mix, but I haven’t gotten it yet.

Attack Wing‘s appeal in your household will depend on a few things: your kids’ ages – it’s recommended for 14 and up, but your mileage may vary – whether you’ve already got a game of this type on your shelf, and, let’s face it, whether fantasy settings are your thing, as opposed to outer space or more Earthly battlefields.

Me, I like D&D, don’t already have a miniatures-based combat game, and watch The Lord of the Rings as part of our family’s December holiday traditions, so I’m finding Attack Wing a lot of fun, and looking forward to more sessions.

Disclosure: WizKids provided a copy of the Dungeons & Dragons – Attack Wing Starter Set for this review.

One Geek’s Family, as Simpsons 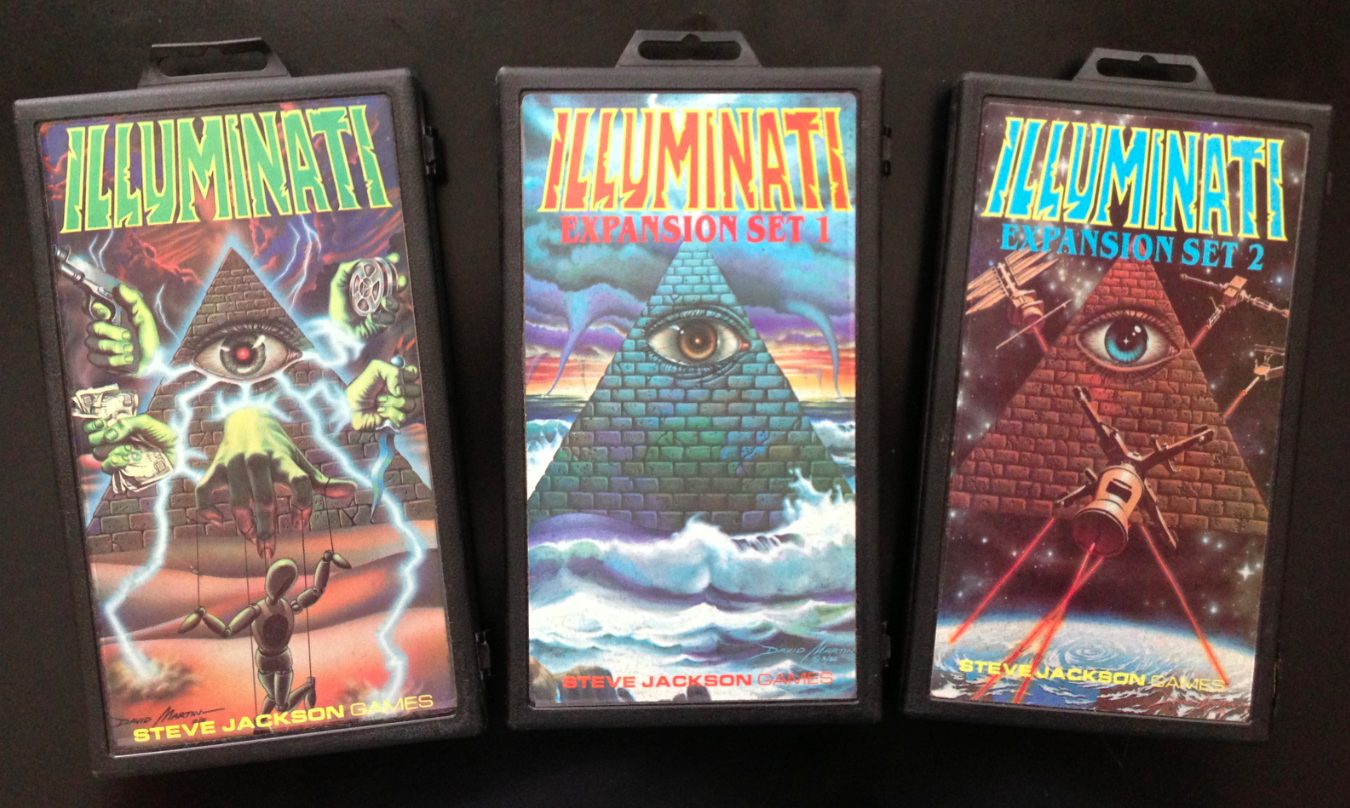