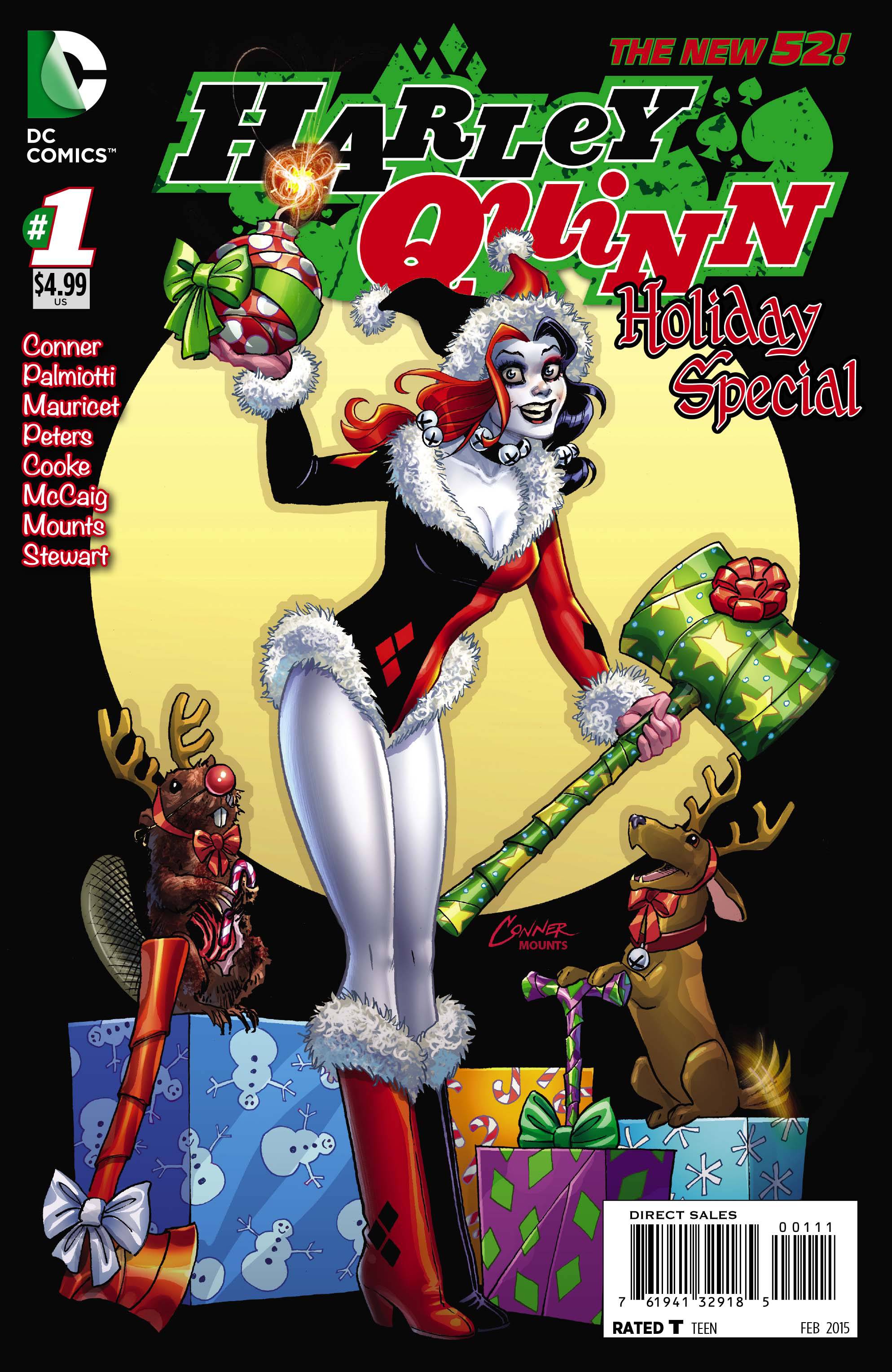 Happy comic release day! Welcome to another installment of GeekMom Comic Book Corner, where we recap our adventures in comics for the week. This week, Lisa and Corrina check out how Harley Quinn spends her holidays, while Sophie picks back up with The X-Files #19, and Corrina also walks us through Batgirl #37.

But first, a panel so egregious, only the image can do it justice. WARNING: SPOILER for Wonder Woman #37.

A favorite Teen Titan returns in Wonder Woman #37. You won’t be glad to see her, especially given this panel. When Corrina posted the image on Tumblr, she was sent a message calling her narcissistic, prudish, and a cheesecake hater. Insults, no worries, but she’s tired of women calling out objectified poses being classified as “prudish,” so she responded on that matter. (Warning: NSFW for foul language.)

This three-story collection of holiday mayhem and madness by Jimmy Palmiotti and Amanda Conner is a crazy Christmas package only Harley can deliver. Part of the New 52 series, the issue’s two Christmas tales and one New Year’s story aren’t the most thoughtful and well-crafted yarns in this month’s DC offerings. However, they really aren’t meant to be. The first story is my favorite, as it lets Harley’s well-hidden humanity show just a little bit, as she attempts to find homes for amassed pets and ends up as a “toy” for a spoiled kid.

The most impressive art is from the third story, “Killin’ Time,” in which Harley seeks out Father Time to confront him about a new-found grey hair. It features beautiful illustrations by Darwyn Cooke. Mauricet and Brandt Peters contribute art to the first and second story, respectively.

It’s a fun one-shot, for anyone who wants a sampling of Harley’s endearingly psycho ilk without committing to the entire series, and it’s a great way to blow off some holiday season stress without actually going crazy.

Conner offers two cover choices: the main Christmas-themed and a variant with a New Year’s. I prefer the main cover and feel that  is missing out on a big money-making opportunity, if they don’t release these as Christmas cards next year. I’ll take four boxes, please!

With #19, The X-Files returns to doing what it does best—cooking up nefarious government schemes being tested on an unsuspecting public. This time, we’re talking drugs and a conspiracy that dates back to the 1960s. The issue opens with a flashback to 1966, starring the Cigarette Smoking Man and Mulder’s father, who are dealing with the aftermath of a breach at a government facility. It’s an interesting start that introduces the key weapon in all of this: A government named G-23 that can “bring out the worst in people.” Whether or not Joe Harris is a fan of Firefly/Serenity I can’t say, but that’s quite a coincidence if he’s not. Could we be looking at a shared fictional universe? There’s nothing I’ve seen to say no!

Jumping forward to the present, and Mulder receives a tip off about this drug from the Smoking Man himself whilst waiting for a dinner date with Scully. I like that they have a dinner date. It reinforces that they’re an actual established couple now, without letting the mushy stuff overtake the plot. What I actually like more though is that the date doesn’t happen. It allows Scully to be upset at Mulder and for him to make amends, but in a way that keeps the plot moving forward. It also gives us some great banter, a piece of the X-Files puzzle that had been somewhat lacking in S10.

There are only three people you might turn to when investigating “government weed,” so it’s not long before The Lone Gunmen are on-board. It’s great to see them again, even if they are being used for some classic exposition scenes, and they naturally give Mulder all he needs to continue the investigation out in Nevada. It’s interesting that Scully doesn’t appear to follow him on this trip, although no explanation is given as to why not. Mulder isn’t alone, however, and we soon discover that Langly has decided to follow him. I have to admit that decision bugged me. For a man so paranoid about the government and who in the eyes of many is supposed to be dead, suddenly deciding to go flying halfway across the country just on the promise of “government ganja” seems way out of character. The final panel is… interesting. Even though it’s more than strongly insinuated that this is a hallucination, it’s inclusion feels weird and unnecessarily pervy.

This is a really strong issue with a solid plot and good character interactions. Tom Mandrake’s artwork is not at all to my taste, but I have to give it to the man; he can draw trippy well. I’m looking forward to see how this one concludes!

We liked this so much, we reviewed it twice.

Reading a Harley Quinn comic by Conner and Palmiotti never fails to make me smile. I know that’s odd for a comic starring one of Batman’s more insane villains, but while Harley lacks inhibition, she can sometimes have a warm heart. She just kinda expresses it all wrong, like in the opening story, where she gives away her excess kittens and puppies by choosing among people out Christmas shopping. Or when she can’t quite say goodbye to the last puppy, so she terrorizes an entire police precinct to track the license plate number of the car where she left the puppy. This leads to her breaking and entering the home where the puppy is, just to make sure he’s okay. (Which he is.)

And then the bratty daughter of the family decides Harley is her Christmas present and… it becomes surprisingly touching. I forget sometimes that Harley is a psychiatrist. There’s also a number of fabulous pin-ups and two more stories—with one featuring Harley trying to stop the New Year from coming. All of it is sheer (though twisted) fun. This issue would make a great stocking stuff for any geek.

As it’s clear from my previous reviews, I’ve enjoyed this creative team change for Batgirl. I still do, but I’m starting to have some serious niggles that are interfering with my enjoyment of the fabulous art by Babs Tarr.

One is, as I said last time, Black Canary being such a jerk. That continues this issue, where she leaves Batgirl in the lurch. I hope this is a plot point that’s wrapped up very soon. The second is that this Babs is a little more carefree than I’m used to seeing her behave. Of course, the creative team wanted to add more fun into this, and they have, but still, Babs is a disciplined and careful person by nature, and I don’t think the writers have yet grasped that fully.

The third (MINOR SPOILER WARNING) is that at one point, the villain is mocked for cross-dressing. I believe the creators meant to mock the character himself for being over-the-top, but it comes across as slamming transgender people. The creative team has already issued an apology for this, so I won’t belabor the point. What I will say is that for the last three issues, Babs has taken down three minor and semi-forgettable villains sent against her by a mastermind. I’d like to have more story progression. Three times the same plot is at least one time too many.

Still, it’s great to see Babs in action against a doppleganger, well able to take care of herself, and seizing her own destiny. I like the new cast that’s been introduced and there’s one chilling panel, a callback to Babs in the wheelchair, that shows Tarr can do scary as well as fun. Also, there’s a great panel of the cast in civilian formal wear, which is fantastic. But I’m ready for this story of someone behind the scenes sending enemies at Batgirl to be done. My guess is Jim Gordon Jr., Babs’ brother, who has never quite been able to let his story succeed at anything. 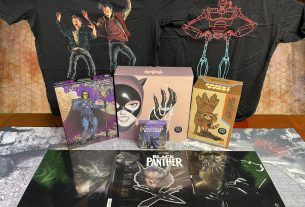 Ring in the Geeky Holidays With These Mondo Gift Ideas