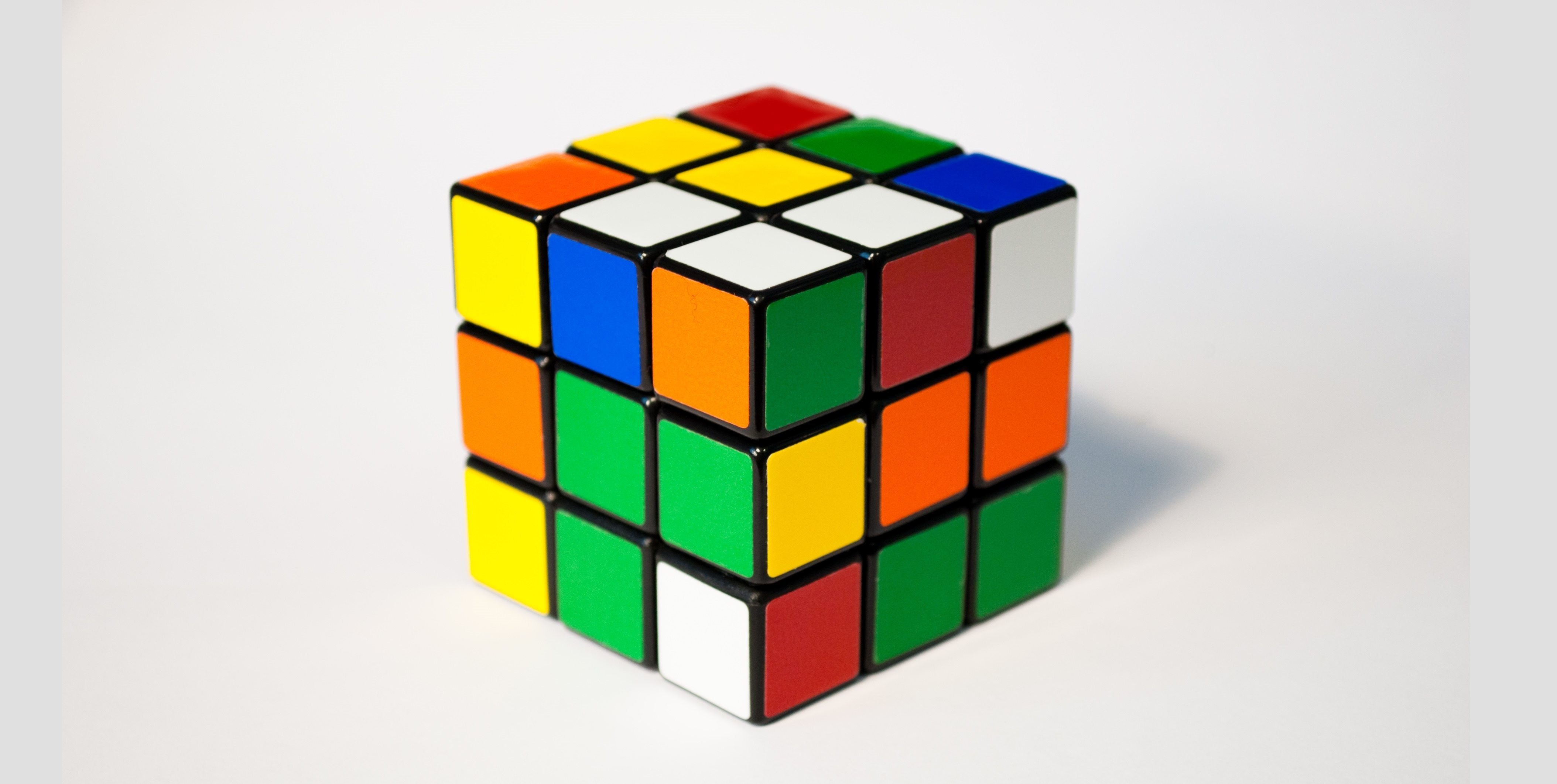 About a month ago, I came across my wife’s original Rubik’s Puzzle Cube. I remember seeing these things my entire life, and thinking that the people who can solve them must be crazy smart. This time, looking at this 34-year-old toy, it struck me that I could learn to solve it. I just had to try. I found out some interesting things along the way.

2) Just about anyone can do it. Simple enough. You just have to give yourself a chance, and use the educational tools (read: Internet) at your fingertips.

3) There is a shorthand for transcribing moves! The notations most commonly used are (F),(U),(D),(B),(L),(R), and (‘). These stand for Front, Up, Down, Back, Left, Right, and Counterclockwise. The (‘) denotation is required because all turns are written in “clockwise” by default, meaning you turn the face clockwise on its own axis. By adding the (‘), you can indicate a counterclockwise turn. An example is:

This sequence is a basic one used to move a piece from the top section into the middle row. If you notice, for each step noted with a (‘), there is an equal and opposite move completed clockwise. In fact, all the steps are done in reverse except for the center move: a clockwise turn of the upper face. That turn is where the magic happens; all the rest of the turns simply set the stage for a turn that does not disturb the pieces on the bottom row.

4) There are Cube competitions. Over the last 34 years, the Rubik’s Cube has drawn the attention competitors around the world. There are world records for solving the Cube fastest, with variations including one-handed, blind-folded, and solving the cube with your feet! The standing world record for the fastest human solution is held by Mats Valk of the Netherlands. In March 2013, Mats set the record with a time of 5.55 seconds.

5) Programmed robots have managed to blow away human records. While researching innovative ways to solve the Cube, I found out about the Cubestormer 3, a robot made from LEGO Mindstorms and a Samsung Galaxy S4, which holds the record for the fastest solution at 3.253 seconds.

6) I can fit every sequence I need to solve any cube on one side of a 3×5 card.  It may not be the fastest or most elegant solution, but I can do it every time. The simple sequences make it even more impressive to others, because you can solve the Cube without referring to a cheat-sheet, once you’ve memorized the basics.

7) People will touch your Cube without asking, and that’s okay. I was learning the shorthand mentioned above while putting in bike-time at the gym, and I put the cube down. Someone walking by grabbed my just-solved cube, and performed a few quick moves, and had transposed the centers! I had no idea how to make it right. I insisted he allow me to watch him do it a few times, until I got it. I have learned about six different patterns to make from a solved state, and each of them was learned by someone who picked up my solved cube and did it, without asking.

8) The maker matters. Buy the official product, not a copy. The knock-off may be cheaper, but it will break, the stickers will come off, or (shudder) it may be difficult to turn. Some knock-off brands use the out-dated construction which requires you to line up every edge perfectly before executing a turn. This makes it difficult to solve, and can burn you out before you even get the hang of it.

9) Keep the old one on the shelf. Related to #8, the older models are more difficult to use. Get a new one, and enjoy the ease of use. I solved my wife’s two cubes, and gave them to her to store in the solved state forever. The newest models don’t even have stickers! They have colored plastic edges, which means you can use that cube until it falls apart (which it won’t), and never have to worry about the stickers peeling.

10) Don’t ever take your Cube apart. It is possible. It is cheating. It will damage your Cube irreparably. It takes a lot of pressure and leverage to pull a Cube apart. It can be done, but they are not designed for that kind of wear-and-tear. Play nice with your toys. If you need help solving it, turn to Google—not your screwdriver.

11) There are many alternate types. Everything from 2x2x2 to pyramids; there are dozens of variants, and some of them are worth having. Our son received the 2x2x2 for Christmas, and has successfully stumbled across the solution on his own. This variant builds confidence, and seeds the solver with the kind of 3D logic required to solve more complex variants.

12) There are tons of apps. YMMV, but I really like some of them. I downloaded Magic Cube from the iOS app store, and I learned bunches from it. It also allows you to unlock some of the variants, so you can try some of them out before deciding to buy.

I won’t be entering any competitions, but I am happy to say that I enjoy taking my Cube to parties with me. I let kids mix it up, and then they watch as I solve it. I also show them pretty patterns, which I will share below. It is fun, and it is also a great icebreaker, which I totally need sometimes. Bonus? Other people break the ice, because I’m busy being interesting.

My favorite patterns (to be done from the solved state) are:

UUDDLLRRFFBB: This sequence makes each side form an X. The corners and centers match, but the four edge pieces are from the opposite faces.

FDF’DDL’B’ULRUL’F’ULUU: This sequence rotates a 2×2 cube in one corner, forming a cube inside a cube.

Share your favorite patterns in the comments, I’d love to try them!