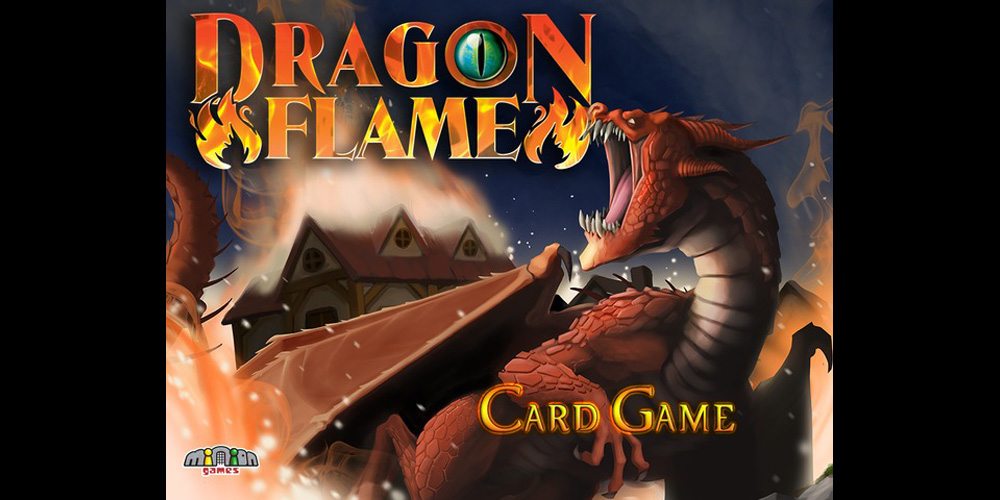 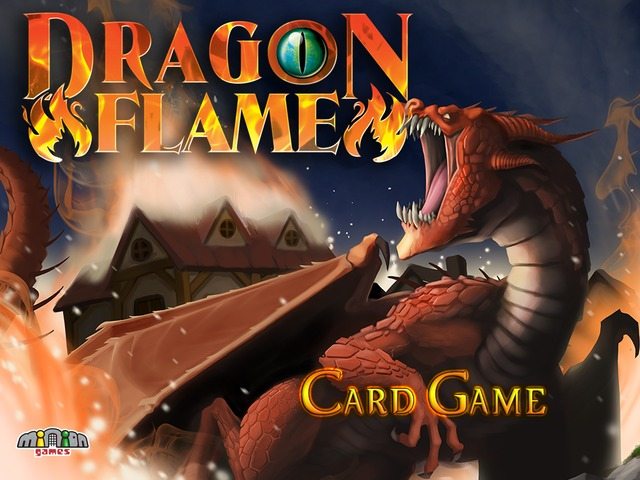 Dragons, as you are probably well aware, love their treasure. What you may not have known is that they’re incredibly picky about what goes into their treasure hoard. And, of course, there’s always the problem of pesky knights–full of sharp, pointy bits that make the nest uncomfortable. In Dragonflame, you take on the role of dragons, collecting the right treasures and burning down a few villages for good measure.

At a glance: Dragonflame is for 2 to 5 players, ages 13 and up, and takes about 45 minutes to play. It’s currently on Kickstarter, and the pledge level for a copy of the game is $25. I think kids younger than 13 could pick up the gameplay, but Dragonflame is as much about playing the other players as learning the rules, so less-experienced gamers may be at a disadvantage.

The version I played was a demo prototype–the artwork looks complete, though the final quality of the cardstock may change (based on stretch goals). The Fire tokens in my set were wooden cubes; the final version will either use cubes or wooden flame-shaped tokens, depending on the final funding level achieved.

The cards look great, though: nice, polished artwork representing the various types of treasures and other things that can turn up in the game. Most of the cards are fairly straightforward and are easy to understand, though with a few special cases you’ll need to refer to the rules the first few times you play.

There are 6 each blue and red Castle cards. Each has a castle on one side and a banner on the reverse side. There are also two green banner cards that are used only for the two-player game.

You can get the full game as a print and play for free here in case you’d like to give it a shot before you decide whether to back the game.

The goal of the game is to have the most points at the end of the game by collecting treasures and burning down villages.

To set up, you’ll place the nine village cards in a grid, with an empty field in the center. (There’s one other empty field that will be randomly placed in the grid.) Each player takes the flame tokens of their color. You’ll need enough castles of each color so that there’s one more than the number of players, and the rest are removed.

Each player gets a random red Banner–this will determine player order for the first round, as well as whether cards are played face up or face down. The blue Castles are placed in the center of the table.

The main deck is shuffled, and each player gets 3 cards.

In player order (according to the banners), each player places one card next to a castle card of their choice. Note that each castle has two numbers on it: the number in the colored banner will determine the player order for the next round. The number shown on the cards indicates how many cards may be stashed at that castle. For example, in the photo above, the “1” castle can only have 2 cards, the “2” castle holds up to 3 cards, and the “3” castle can have any number of cards.

Players take turns placing their cards until everyone has placed all three.

Then, in player order, each player takes one castle and all the cards stashed there. The previously used banners are flipped over and used as castles for the next round, and castles are flipped over to become banners for the next round. All cards are revealed and resolved as they are taken. Since there will always be one extra castle, any cards left there are discarded. (The castle card is also set aside until it’s needed again as a castle.)

Most of the cards are simply kept in your hoard–treasures, curses, knights, and so on. However, some of the cards are Dragonflame cards, which let you set villages on fire. You place 1, 2, or 3 tokens (according to the number on the card) in a row, starting from any edge. Picture your dragon positioned on one edge of the grid and breathing fire across the grid. If there are no spaces left in a village, you don’t add any cubes there, but it still counts toward your Dragonflame count.

There are also some relic cards that give you special abilities–these are placed in front of you just like the treasures and may be used when indicated on the card.

When there is only 1 card remaining in the main deck, that indicates the last round of the game.

First, players will score for burned villages. Only villages that are completely burned (that is, all of the locations are filled with tokens) will award points. The player with the most tokens gets the highest score, second-most gets the second score, and third-most gets the third score. In case of a tie, the player that burned that village first wins the tie.

Next, you score for your hoard. There are several different types of cards that come into account. Jewelry is just worth the number of points printed on the card. Statues are worth 5 points each, but 0 if you have two of the same type. Knights subtract 3 points each. A Princess is worth 1 point for each unique type of treasure card you have in your hoard, and a Curse subtracts 2 times the number of unique types of treasure cards in your hoard.

There are also a lot of Chest cards of different colors. For these, you’ll get points for one color and lose points for all the other colors you collect. For the positive score, you’ll get the square of the number of chests–so for my 5 Golden Ingots chests (the teal-colored chests in the photo above) I’ll score 25 points. Any other chests you have (like the chest of Imperial Coins in the photo) subtract 1 point per card.

The dragon with the highest score wins.

The two-player variant uses a smaller city and you’ll remove more cards before you start, but is otherwise fairly similar.

The core mechanic in Dragonflame is similar to a little abstract game I love called Coloretto. In it, you place cards into separate piles, then each player takes a pile. At the end of the game, you score points for two of the colors you collected, and lose points for any other colors you collected. Much of the strategy comes in making piles that are good for you but bad for the other players–or else making one pile attractive to another player so they won’t take the one you really want.

Dragonflame uses a similar mechanic and scoring mechanism, but with several tweaks. You play cards out of your hand, rather than flipping them blind from the top of the stack. Everyone always plays all of their cards before choosing piles to collect. Finally, since some players will be playing cards face-down to the stacks, there are always some unknowns when you’re deciding which castle to take.

The scoring is more complex, too, since there are more than just the different colors to score. Knights and Curses subtract points; Princess cards are multipliers, Statues can cancel each other out. On top of that, you also earn points for burning villages, and the relic cards may let you pull some last-minute tricks.

At times it does seem like there are two games going on: one is all about set collection, and the other is a territory control. The thing is, in order to play the territory control game, you’ll have to take sets that have less treasure in order to get Dragonflame cards. Balancing the fire vs. the treasure is important.

Dragonflame is definitely more complex than Coloretto, so even with the similarities I think they may play to different crowds and situations. Coloretto is a great filler game and plays very quickly, and has more of a press-your-luck element to it. Dragonflame is a bit meatier and throws more decisions your way: not only where to place your cards, but also in what order to place them so that you can use the face-down cards to your advantage.

I really liked Dragonflame. I did try the two-player variant and it works well, but I still prefer playing with more people because there’s just more going on with lots of people fighting over villages and treasures. The artwork is sharp, and it has nice depth for a compact game. (I should note that the cards and tokens by themselves will fit into a pretty small package, but I don’t know what size the final box will be. I’m hoping it won’t be enormous.)

For more information and to back the game, visit the Dragonflame Kickstarter page. 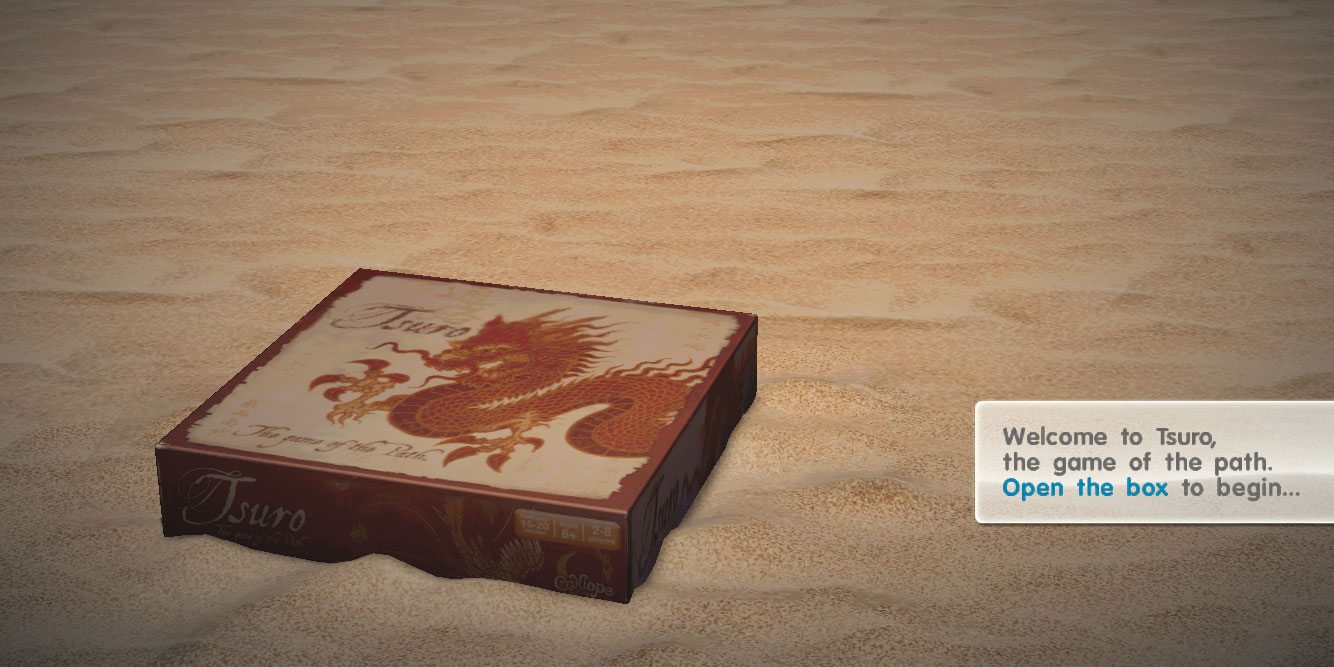 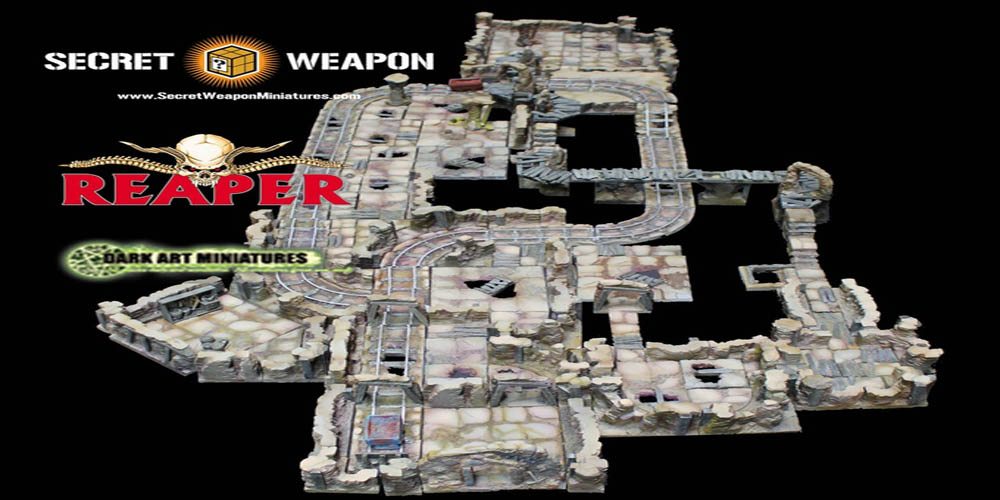