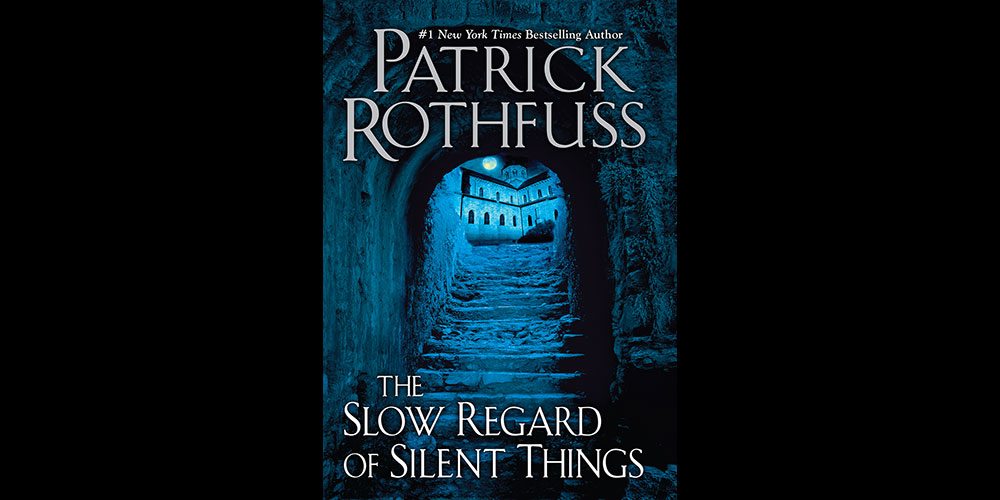 I have never considered myself any sort of fanboy; I’m quite rational about most things. Artists, actors, authors, and their like are mostly people just like you me, they just have a profession that is a little higher profile. Yet, last week I found myself dancing from foot to foot, clapping to myself, grinning ear to ear, and gibbering “OHBOYOHBOYOHBOY!!” more loudly than I should have been comfortable with — all because I had just received a box that had Patrick Rothfuss’s name on the return address.

I don’t pretend to imagine it was Rothfuss who was in the shipping department on the day this box was sent out, but it didn’t matter. Inside the box, I knew, was a copy of his latest book, The Slow Regard of Silent Things, a slight detour in his ongoing fantasy trilogy, The Kingkiller Chronicle.

(In his writing and speaking, Rothfuss is steadfast in his avoidance of spoilers and I’ll honor that here. I’m only going to discuss the book in the broadest of strokes.)

Admittedly, I’m a little late to his party. I only discovered Rothfuss and his writing a couple of years ago, but I immediately fell in love with his books, The Name of the Wind and The Wise Man’s Fear and devoured both in huge chunks before immediately setting to the task of re-reading them. These are books that I would carry with me at all times because, as a purely hypothetical example not based in truth whatsoever, those 45 seconds you spend sitting at red lights are wasted time that could definitely be put to better use.

Patrick Rothfuss is an extraordinary storyteller and spins a tale that is both compelling and a pleasure to read. His writing is lyrical, moving, and masterful — and it’s enjoyed by hordes of self-professedly rabid fans. These two books have launched dozens of Web sites devoted to exploring the secrets and theories about what’s potentially happening in Rothfuss’s imagined world and what’s going to happen in The Doors of Stone, the third and final book in the trilogy, when it’s released sometime next year (or the year after).

So, it was with great excitement that I received this box and opened it very carefully to retrieve the treasure that was within. And not just for the writing! I knew this book had been gorgeously illustrated by Nate Taylor, who had also illustrated Rothfuss’s lovingly deviant Adventures of the Princess and Mr. Whiffle books.

I also knew The Slow Regard of Silent Things was going to be shorter than the other books he has written, but I wasn’t prepared for how small the book would feel in my hands. Its size seemed almost fragile, which felt appropriate, given the book’s subject.

In both of The Kingkiller Chronicle stories so far, the protagonist, Kvothe, has a petite friend who he names Auri. She lives in the miles and miles of abandoned ruins of rooms and passageways beneath the university that Kvothe attends. Her subterranean world has been named the Underthing and it’s there that The Slow Regard of Silent Things largely takes place.

Officially, The Slow Regard of Silent Things isn’t part of the larger narrative, but if you read closely, there are hints and passages that allude to Kvothe’s narrative. This book serves, in part, to fill in a part of the story that Kvothe cannot tell. In the previous tales, Kvothe seldom sees Auri because she is almost overwhelmingly shy. But in The Slow Regard of Silent Things we get a look at what Auri does in between visits with Kvothe.

She is an odd duck, Auri is. This much is clear from The Kingkiller Chronicle. But while The Name of the Wind and The Wise Man’s Fear hint at her peculiarities, The Slow Regard of Silent Things throws any pretense aside and takes a long, honest look at what she does and how she thinks.

To Auri, places are important. As much of her time is spent making sure everything is perfectly polite, The Slow Regard of Silent Things feels like the proverb “a place for everything and everything in its place,” writ large. It’s here that Rothfuss excels and The Slow Regard of Silent Things really shines. Reading through the book’s 149 pages, Rothfuss expertly describes the Underthing as Auri sees it. Her world is closely defined by an ever-expanding and contracting catalog of curiosities, which only she can interpret as to how they affect and interact with her world.

The word “perfect” pops up often in the book and perfection is a standard that is important to Auri. Whether it’s a “length of fine white tatted lace,” a sheet of honeycomb that was “full of summer bells and drowsy summer afternoon,” or the musky smell of a bowl of nutmeg — “a smell like a bordello curtain, deep and red and full of mysteries” — they are all integral to Auri’s alignment of the important things.

These elements must all have homes and Auri has named many rooms and spaces in the Underthing where her collection resides; places like Mantle, Throughbottom, Tenners, and The Grey Twelve. Part of the fun in reading this book is deciphering why Auri has given these names to these places. Rooms like Winnoway and Annulet make it easy to imagine the sake of their namings, but Candlebear and Rubric evoke the entrances to more interesting stories.

As peculiar as Auri is, The Slow Regard of Silent Things is also an unusual book. You may have already heard about the first eight words that Rothfuss writes on these pages. They’re found in the Foreword and they are foreboding: “You might not want to buy this book.”

It’s a curious sales pitch, but probably honest and sound advice. If you’re not a reader of his Kingkiller Chronicle, you will likely feel lost. Without the framework of the bigger picture, Auri and her world will be altogether confusing.

Rothfuss also confesses in the foreword that it’s a strange tale that “doesn’t do a lot of the things a classic story is supposed to do.” And it doesn’t. Plus, it’s a story whose boundaries don’t reach out very far, so it has the potential to feel a bit tedious at times, depending on your reading mood.

I live with a certainty that the grocery lists in the Rothfuss household are full of colorful expressions and fun turns of words that make restocking the pantry an altogether enjoyable experience. But, when I first finished the book, I was a little unsure of what to think.

I believe those empathetic to Auri’s quirks will appreciate the book more than others. There will be others who simply appreciate great writing and will gain great joy out of reading the story. And, without a doubt, there will be some who hate the book because Kvothe is not in it and, while you’re at it, finish the damn story.

Me? The more I thought about it (and after reading it a second time), I realized that I liked it an awful lot. I like the character of Auri oodles and I really enjoyed learning more about her. At times, I think a lot of us probably feel at least a little like Auri.

So if good writing appeals to you or you’re a fan of Rothfuss, by all means, pick up a copy today. If you’re wanting the daring and conflict of the Kingkiller Chronicles, this may not be the best choice. Maybe you should look for something else. In fact, may I point out that Joe Abercrombie has a new book out. It’s pretty great. But if you decide to go in on Auri, I’m pretty sure you’ll enjoy The Slow Regard of Silent Things quite a bit.

Finally, a little story to wrap things up that is most definitely relative. There were a series of moments last week when I was driving to lunch. This book, as lightweight as it was, kept sliding all over the passenger’s seat. I kept reaching for the book, trying to help it find a home on the seat where it would be at peace. Still, it slid. It was distracting and a little annoying, especially as I navigated lunch hour traffic. When I turned across an intersection, I heard the book slide off the seat.

As I pulled into a parking space, put the transmission in park and switched off the ignition, I turned to look for the book. It wasn’t on the floor of the car, so I reached beneath the seat, but found nothing there either. With a furrowed brow, I looked around to see where it had ended up, only to see the book in the pocket of the door, where it sat — tucked away and right side up, very content in its place. A big grin broke out across my face because I knew this lovely coincidence would make Auri incredibly happy.