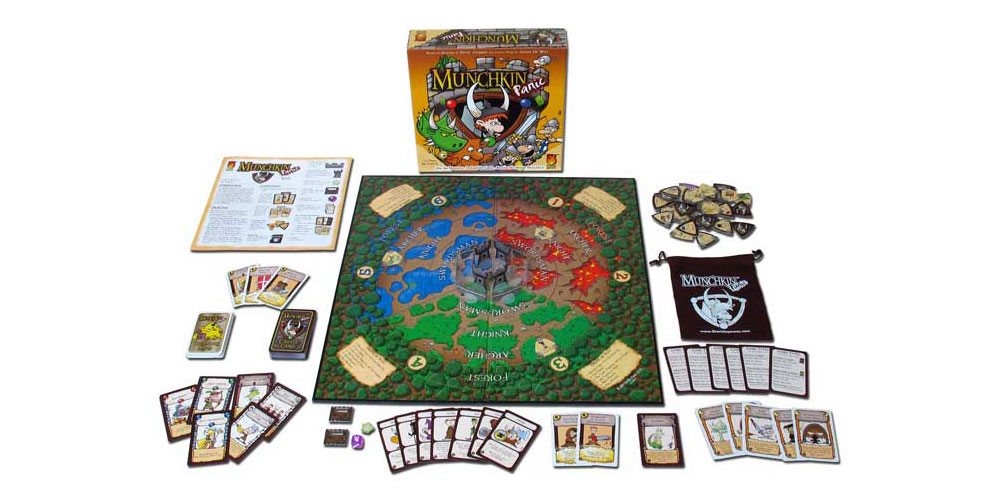 For years, I have recommended Castle Panic to friends at parties, attendees at panels, and just about anyone looking for a great, family-friendly game. It’s possibly my favorite cooperative game and one of my favorite recommendations for people just beginning to get into boardgames.

I’m also a big fan of Munchkin. John Kovalic does the art for many of those games and I really like his illustrations a lot. I like the interchangeability of the decks, and, especially, the humor of it all. Munchkin is one of the first real games I played with my kids, so it holds a special place for me and when I heard the two were being mashed together in Munchkin Panic, I couldn’t wait to try it out.

You and your fellow Munchkins must defend the castle from the horrible Monsters invading from the forest! Terrible beasts like the Plutonium Dragon, Gelatinous Octahedron, and Insurance Salesman will destroy you if you don’t work together. But working together comes at a price – your cohorts are really kind of in this for themselves and they aren’t above stabbing you in the back and taking your stuff. After all, this is Munchkin Panic.

If you’re familiar with Castle Panic, a lot of the components will look similar, but twisted a bit in typical Munchkin fashion. Everything is very nicely printed, high quality, and very nice. In the box, you’ll find:

Munchkin Panic plays very similarly to Castle Panic, with a few key differences. Again, the goal is to withstand the onslaught of Monsters descending on your castle from the forest, but this time around you also have to negotiate with your fellow adventurers for help and avoid the backstabbing that accompanies all Munchkin games.

Setup is nearly identical. At the center of the board, a castle is built with towers and walls surrounding them, one part for each of six numerical wedges in three colors. The castle is encompassed by four rings, representing three types of defense – swordsman, knight, and archer – and a forest ring where Monsters spawn once gameplay begins. Each player is dealt a number of Castle and Treasure cards, depending on the number of players, and four Monsters are drawn from the bag, the die rolled, and placed in the corresponding archer ring. 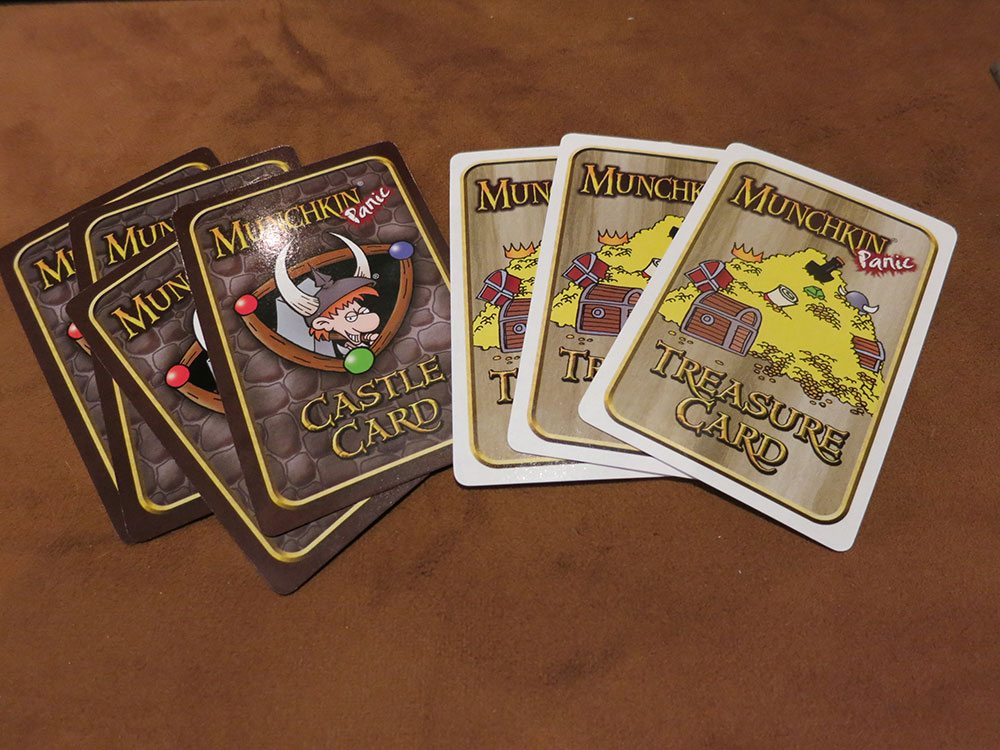 Players take turns completing six phases: First, players may discard a single card and then draw up to the hand limit (hand limit depends on number of players). Next, at this phase, you must give to charity. This is no heartwarming cause, rather, players are limited to a maximum of three Treasure cards (four in a 1 or 2 player game). If you have more, you must give excess cards to the player with the lowest Trophy points, which are calculated by the total point value of the Monsters each player has taken out.

The meat of your turn takes place in phase three. Castle and Treasure cards are used to negotiate help from fellow Munchkins and attack Monsters. A Monster in the Archer ring can only be attacked by Archers or Heroes and only if the color on the Castle card matches the Monster you mean to attack. Castle cards can be augmented by Treasure cards, which deal extra damage or give players another advantage.

Just like battling in Munchkin, the active player can recruit help by offering rewards from the field of battle. Each defeated Monster is worth a point value equal to its maximum hit points, which is tallied at the end of the game to determine a winner. Plus, each defeated Monster allows its vanquisher draw a varying number of Treasure cards, which help in future battles and negotiations. The active player can ask (or force) one player for one card’s help and even offer the Monster’s points or a portion of the Treasure to assist. 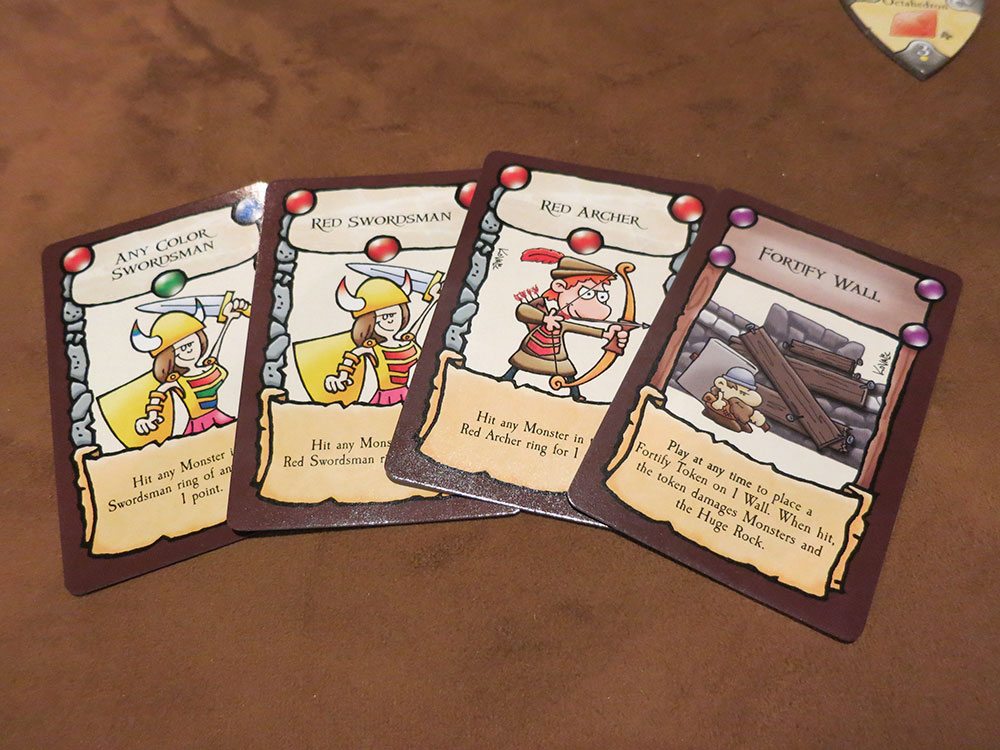 Combat happens by playing Castle and Treasure cards that apply hits to the Monsters, lowering their hit point totals to zero before being removed from the board. Some Monsters require a double (or triple) point hit to be removed. If you slayed a Monster, you can recover Treasure cards in phase four and settle any negotiated agreements with your fellow Munchkins.

The fifth phase sees Monsters advancing toward the castle. From the forest, they advance one ring inward during this phase. Should a Monster advance into a wall, the Monster takes a point of damage and the wall is removed. If that doesn’t wipe out the Monster, it continues and destroys a portion of the tower on its next turn, again taking a point of damage. Still not dead? The Monster begins moving clockwise in the castle, taking a point of damage and removing castle segments until annihilated. Finally, you draw Monsters and place them in the forest using the d6 to determine the sector to drop them and play moves to the next player.

If the Monsters are able to destroy all towers of the castle, the Munchkins lose. So sorry, tough luck. If you manage to place all Monsters and kill them all, the Munchkins win. Monster tokens are tallied and the highest number wins. If there’s a tie, the player with the highest number of Monster tokens wins. If it’s still tied, a winner is decided by a thumb war. Seriously. It’s in the rules, I’m not lying.

There are a lot of things I like about Munchkin Panic. The art is fantastic and the components are great. I was really pleased to see a bag for placing Monsters instead of our old method of turning them face-down in Castle Panic‘s box lid. And the fact that the game ships with an expansion (and four suggested variants) is a lovely surprise.

The expansion changes the objective. It no longer matters if the castle falls. Your only goal is to emerge with the most Trophy points. The game ends when the Towers fall, so defending the castle is only in the interest of those Munchkins behind in points. Additionally, players choose a role that both helps and hurts your game. An assortment of cards are added to the game that ramp up all portions of the game.

I also think that Munchkin Panic is a good deal more difficult than the original game. There are more Monsters and they are tougher. We haven’t won a lot when we played, but I’m not complaining. I don’t expect to win every time I play a game against friends and the same goes when I’m playing a cooperative game. I wouldn’t keep wanting to play a game if I did beat it every time. That’d be boring.

We do get a little better each time we try, though. The first game, we hardly used any Munchkin tactics like curses or specials; we were too busy trying to stay alive. (We still lost the first game and the one after that.) A few more plays and we are now playing the game as it was designed, beating back Monsters while backstabbing or buddies.

When I first discovered Castle Panic my kids were young enough that a fully cooperative game was a really nice choice for them. We won and lost together. Now that they’re older and have developed some competitive spirit, Castle Panic feels a bit … too nice. My kids think it’s funny to deal dad a setback. Or a series of setbacks, over and over and over. Munchkin Panic fills that need pretty nicely, while still allowing us to work towards a common goal. It’s still a bit too early to tell, but Munchkin Panic may very well be our go-to cooperative game … as long as I am wearing the Sandals of Protection.

Munchkin Panic will be available in stores October 8.

Disclosure: GeekDad was sent a copy of this game for review.