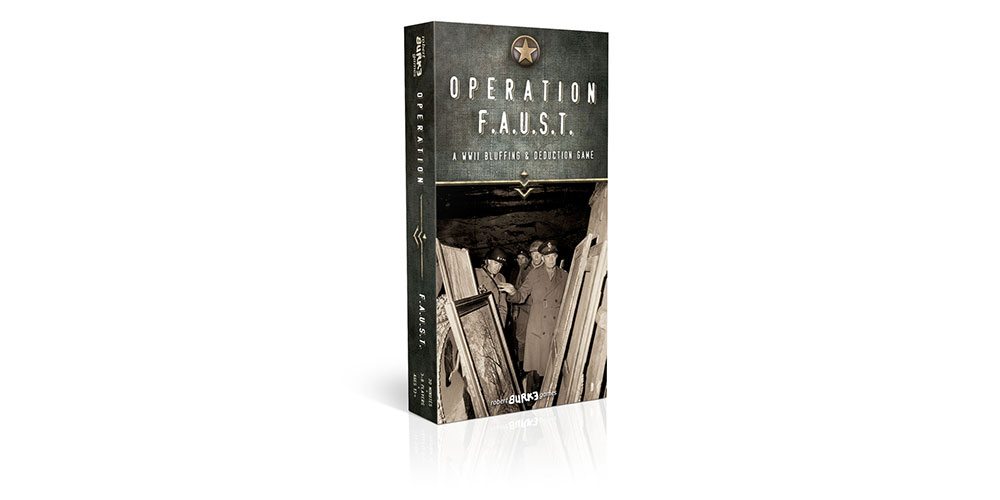 With a Kickstarter launching on October 20, Operation F.A.U.S.T. is certain to be another successful project from Robert Burke Games. The bluffing game for 3-8 players has a great theme and is full of fun and tension. Can you outwit and outbluff your opponents and save the world’s most valuable art from the Nazis? Read on to find out more about this game.

The game consists of a rulebook, a reference sheet for each player, 70 INTEL tokens in denominations of one, three, and five stars, eight Forged Document cards, 26 Plot cards, and 21 Art cards. I played a prototype, so these images and descriptions aren’t necessarily indicative of what the final product might look like, nor the quality of the pieces.

The F.A.U.S.T. in Operation F.A.U.S.T. stands for Fine Art Underground: Stolen Treasures and in this high stakes bluffing game, you are an art patron in occupied France during WWII. You want to save incredibly important and valuable art before it’s looted by the Third Reich. You’ll rely on your network of art dealers, spies, resistance members, and others to provide you with INTEL and help to recover precious paintings. Be the first player to reach $1,000,000 of black market valued art and you’ll immediately win the game.

Arrange cards into three piles, according to card backs. There should be an Art Pile, a Plot Draw Deck, and a collection of forged document cards, this last one equal to the number of players. The art cards represent the treasures you are trying to recover. There are three types of art cards: normal art cards, forgeries, and degenerate art. Normal art carries no restrictions; its value automatically counts toward your goal once you acquire it. Forgeries can still count toward your goal, but you need a forged document card for each forgery in your possession. Degenerate art still counts toward your total, but can be confiscated. Plot cards represent the five character types aiding you in your goal.

From the art pile, draw four cards and place them face down in the middle of the table. This is the Art Cache. Next, dump the INTEL counters into a pile and give each player 5 INTEL to start. Finally, deal two plot cards to each player and the game is ready to begin.

On your turn, you may take one action from four possible choices: First, you can claim a plot card ability. There are five classes and each class offers two abilities – one for just claiming the card, the second for claiming while tabling, or discarding, the card. Classes and abilities are listed here:

The second choice is to recruit another plot card to your cause. This costs four INTEL, but it gives you more options and abilities. And makes for more believable lies. Another choice is to recover art. You have to have art to win the game, so spend 10 INTEL to the pool and take an art card from either the art pile or art cache. Finally, you can pay 3 INTEL to the pool and take one of the Forged Document cards from the pool to help you pass off some forged art (or prevent someone else from doing so).

When a player claims a card either as a hand or table ability, any player with at least 2 INTEL can challenge the claim. If the player claiming the ability does have the card, the challenger must give her half his INTEL, rounded up. If the player claiming the ability does not have the card, she must give the challenger half her INTEL, rounded up. In the case that a player proves that she does have a card, it must be discarded immediately. If you are challenged and you don’t have the card, you lose the turn (can’t use the ability), but you don’t have to discard anything. Any time that a player has less than two plot cards, that player immediately draws up to two, without penalty.

Gameplay continues with players claiming and representing cards and abilities, opponents challenging – or keeping quiet to protect their INTEL – and recovering art until one player has at least $1,000,000 in recovered art. (In order to win, every forged art card in your possession must have a forged document card associated with it.)

Operation F.A.U.S.T. is incredibly fun and it’s one of the best bluffing games I’ve played in a while. In the games I played, it had equal appeal to people who play a lot of games and others who are more casual gamers.

I love the theme and the gameplay really builds on the espionage aspect of the period and historical events — but not in a shiny-blockbuster-Hollywood-but-still-disappointing effort like George Clooney and Matt Damon in The Monuments Men — Operation F.A.U.S.T. is more like the gritty and authentic Rape of Europa.

What’s more, I really like how the images used in the game are people who held those roles during WWII. For instance, the image on the Art Dealer card is that of Alfred Flechtheim, who really was an art dealer in Germany.

Gameplay is fast and fraught with tension, especially as the game wears on. Once players begin building up their caches of INTEL, it becomes so much riskier to challenge another player’s Plot card claim. Even if you see that player pulling ahead with Art cards. Plus, it doesn’t matter if you lose, the game plays quickly enough that there always seems to be time for one more game.

I think the game plays a little better with 4 or more players. It’s especially good with the full complement of eight because it becomes a challenge to remember who represented what cards and there always seems to be someone willing to call a bluff. Still, we managed to have a great time even when playing with three.

The Operation F.A.U.S.T. Kickstarter should launch on October 20th. Make sure you check it out when it is live or bookmark the game’s Facebook page to stay up to date on all the latest news.

Disclosure: GeekDad was sent a prototype of this game. 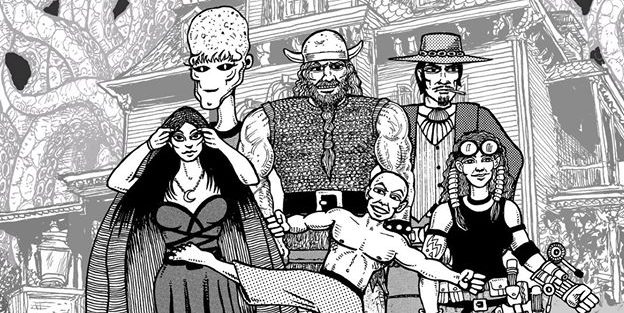 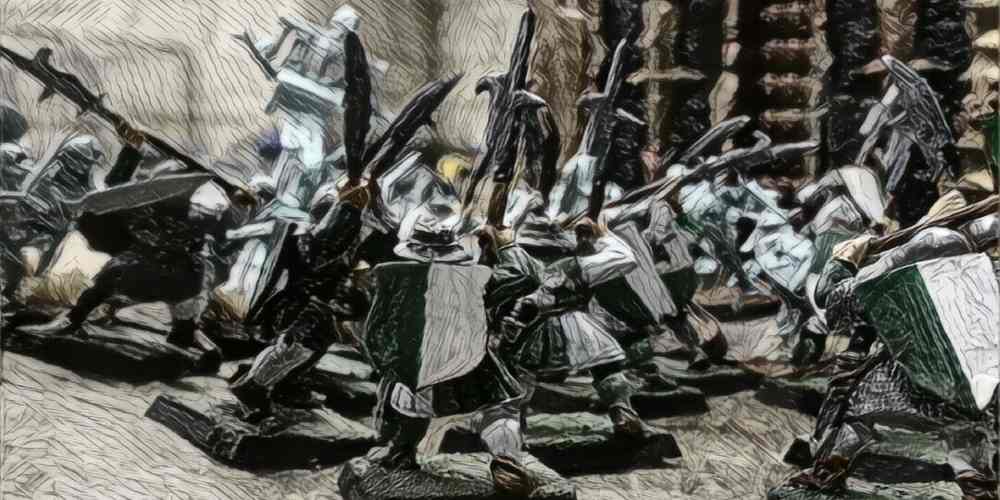 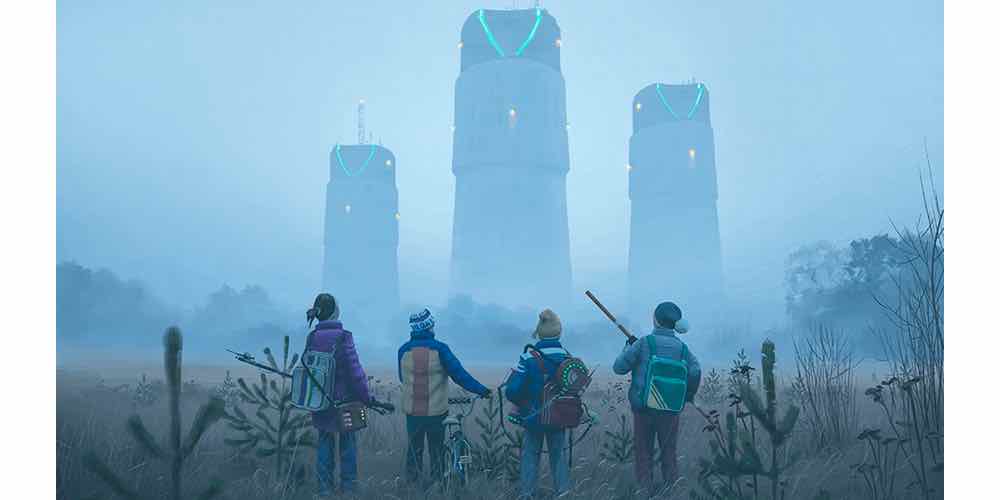