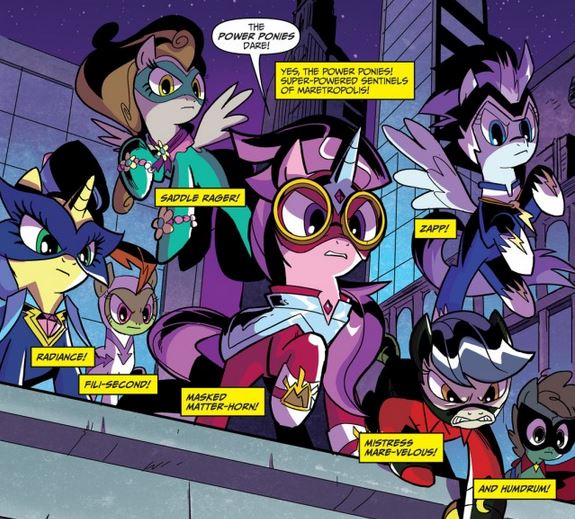 Happy Comic Release Day! Welcome to another installment of GeekMom Comic Book Corner, where we recap our adventures in comics for the week. This week I dive into the world of the Power Ponies while Lisa tackles Doctor Who, and Sophie has a sleepover with the Lumberjanes.

My Little Pony Annual takes us on a journey to Maretropolis, a world that the Mane Six and Spike visited briefly in season four of the TV series. Maretropolis is the home of The Power Ponies, a superhero powered group similar to the Justice League. The issue takes off running with a robbery by the Pharaoh and his mummy minions (say that six times fast). The Power Ponies rush in to save the day and after the glamor of their victory is complete, we see their true nature at Power Pony Headquarters and it’s not pretty. They are the most disagreeable group I’ve seen. It’s a wonder they can cooperate when taking on the baddies.

Their lack of friendship is what ultimately puts them at the mercy of their rouges gallery.

Looking back, the entire issue reminds me of an episode of the Justice League: The Animated Series when Gorilla Grodd formed the Legion of Doom and they almost took out the Justice League. The way the Power Ponies ultimately overcame the evil Mane-iac and her evildoer team was fun to read. Taking down the bad guys took least amount of play out time in the book, but the lack of time involved in the final battle didn’t bother me.

Overall it was a very fun read and well worth the money I had to fork out for it, which was a little more than normal because of it being an annual issue.

Sophie Brown — Lumberjanes #7 by Grace Ellis and Noelle Stevenson with art by Brooke A. Allen

Lumberjanes #7 answers a lot of questions for us but leaves plenty to be going along with as well. The issue opens with the girls, now teamed up with Camp Counselor Jen, attempting to retrieve the mysterious crystal from Rosie’s office. There’s some great old-fashioned farce comedy and a lot that will appeal to adults too as Jen flips from exhilaration at going against the rules to terror when she realizes she’s probably about to get fired!

In the woods the secret identity of Diane is confirmed, and if you were paying attention last issue then I doubt it will come as much of a surprise. There’s some drama when parts of the group realize others have been keeping things from them, and nothing runs smoothly while suspicions are flung about, but that never stops them from working together. Friendship to the max after all! Of course it’s not long until something happens that draws them all together once again and leaves us on yet another cliffhanger.

My favorite thing about this issue is the art during the walk through the woods. As Diane explains her story the background shifts behind the girls from the dark woods to artwork reminiscent of Ancient Greece. The panels give the impression that the girls are walking around the side of the sort of ancient pottery you’ve probably seen in a museum. It’s subtle but beautiful and really adds to the background of the story without the need for adding in forced flashbacks. It’s these details that really make Lumberjanes a cut above so many of the comics currently on shelves.

Like the difference between the Tenth and Eleventh Doctors’ on-screen incarnations, the Eleventh Doctor’s new Titan Comics Series takes on a style completely its own.

While the Tenth’s Doctor’s first adventure is fast, sarcastic, and slightly dark, this series is a little more wild and lively with an edge of melancholy. It certainly is more colorful, both literally, in the characters and aliens portrayed, and in the storytelling style.

This story takes place soon after the events in Issue #2’s story (penned by Al Ewing with the same art team). In #2 Doctor’s mis-timed attempt to treat his new companion, Alice Obiefune, to the unspoiled paradise of the planet Rokhandi, he lands in the planet’s new, garish, and over-the-top-happy theme park where unhappy or disagreeable guests are handled in a sweetly sinister way. He “corrects” this dilemma, in a way, but actually makes things a much worse for Rockhandi.

In this third issue, the same entity behind the theme park fiasco seems to taking on a more devilish role in helping struggling musicians get their big break. This includes one young, talentless little performer in the 1960s, John Jones, who seems vaguely familiar in a pre-Bowie/Ziggy Stardust, David Jones kind of way. As in true Doctor/Companion formula, the pair have to figure out when, how, and if this performer blossoms to his superstar status… and who’s behind this music history hiccup.

The Eleventh Doctor has always been one of the more childlike incarnations of The Doctor, and the humor, some of it a little sophomoric, keeps that sense. However, the most interesting character is Alice. I like Alice as a companion quite a bit. She’s resourceful, smart, and not two dimensional.

The Doctor took her on board as a way to help cheer her up after a series of tragic turns in her life, but she doesn’t spend much time either wallowing in self-pity or following The Doctor around like a goggle-eyed loyal puppy.

She lets The Doctor know where he stands in her opinion right way, and it is definitely not in front of her. She even comes across as a protector and savior for Eleven a time or two in the first three issues alone. I know companions come and go, but I hope they keep her around awhile…for the sake of both the reader and The Doctor.

Age Recommendation: Tweens and up

Titan Comics’ latest Doctor Who Adventures series featuring the Twelfth Doctor has just been released, and it more than keeps up with the other two Doctor series.

The Doctor and Clara, thinking they are about to land on a frozen, snow-filled planet, find it has been recently–and artificially–changed to a tropical, hot jungle. Finding the one responsible for the environmental interference is only part of the problem, as The Doctor also investigates the source of an unsettling distress signal he received before landing on the planet.

Unlike the new series for The Doctor’s two previous incarnations, The Twelfth Doctor is still in his inaugural television season, and doesn’t have too many “lost adventures” yet to work with. This comic sticks with his current companion, and familiar face for Whovians, Clara Oswald, who is undergoing the same “real life” and “life with Doctor” juggling as she is in television series. This gives the reader a chance to jump right into the story, without a quick introduction to new characters.

The current Doctor, Peter Capaldi himself, should be pleased with his first comic book portrayal. The dialogue is smart, snappy, and funny. The comfortable interchange between The Doctor and Clara plays well in this story, and even includes The Doctor’s own jabs at his former incarnation.

When The Doctor scolds Clara on caring too much about people’s “packaging” rather than what’s on the inside, she reminds him his last “self” didn’t mind the “odd bit of pretty packaging.”

“The ‘Me’ that thought a fez–an item of apparel resembling and upturned plant-pot–was cool?” he replied, noting a sense of “sophistication and timeless sartorial elegance” has been restored with his current self.

I’ve been keeping up pretty religiously with Titan’s Doctor Who series, and so far this first Twelfth Doctor series has been my favorite. It’s exciting, fast-moving, funny, and mysterious.

I’m looking for that to change when the first of the five-part Ninth Doctor mini-series comes out in March 2015. Even with the Doctor’s changing face, personality, and battles, one thing remains constant: We never know what’s going to be on the other side of the TARDIS when you open that door.

Disclaimer: Some of the writers may have received review copies of the titles they reviewed. 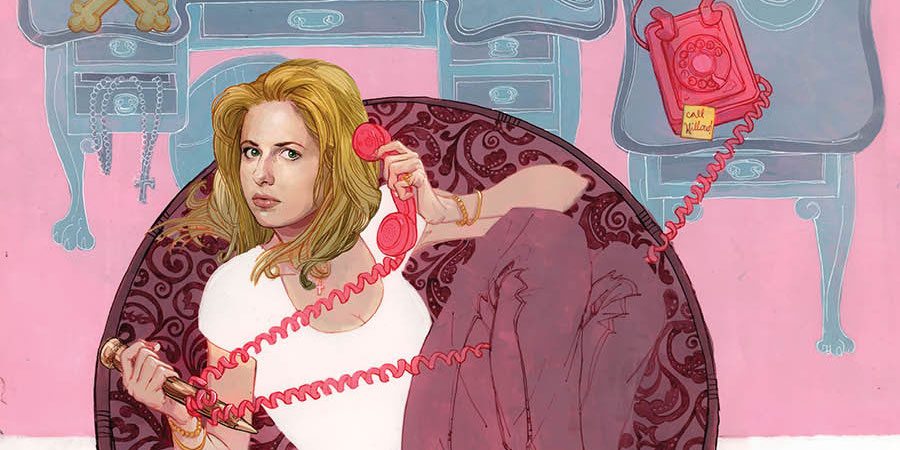 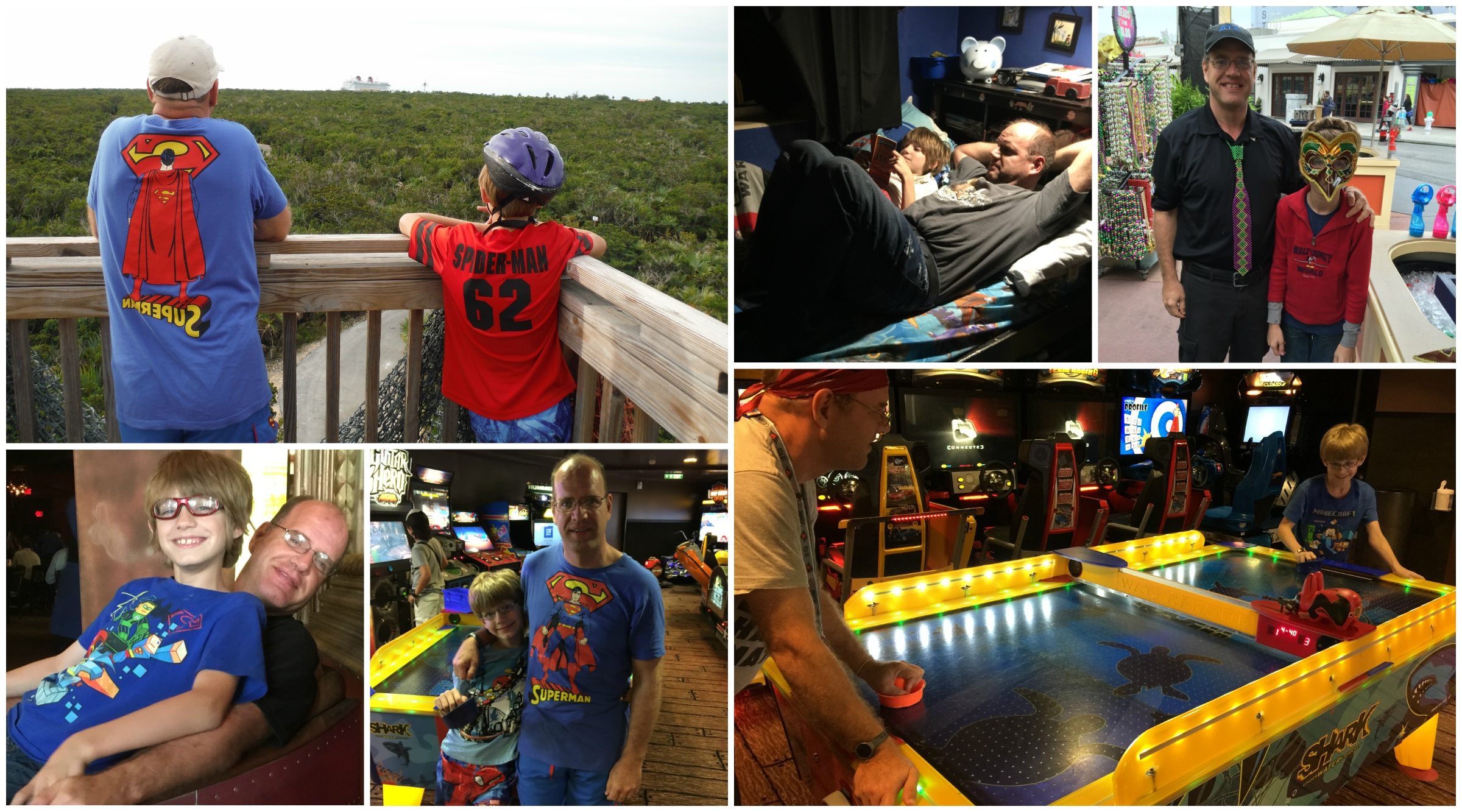 Doctor Who Season Six: The Curse of the Black Spot Pirates!