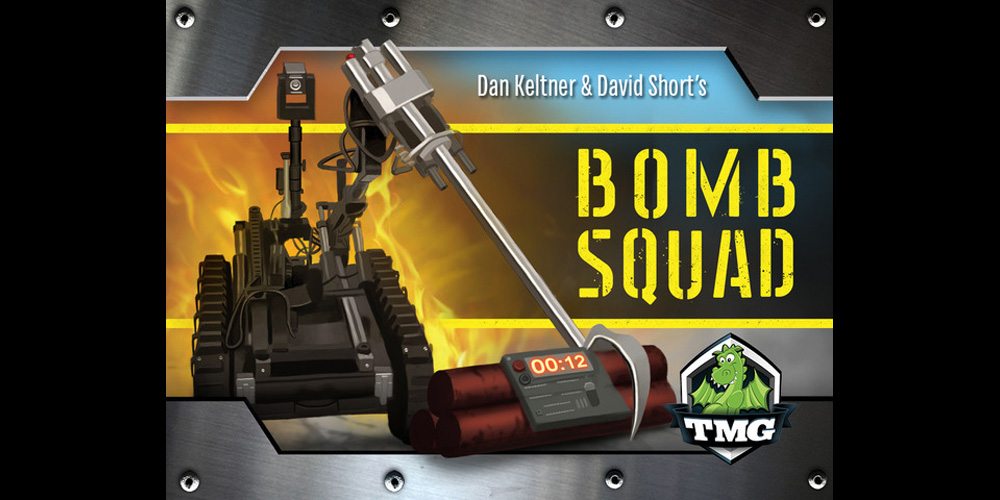 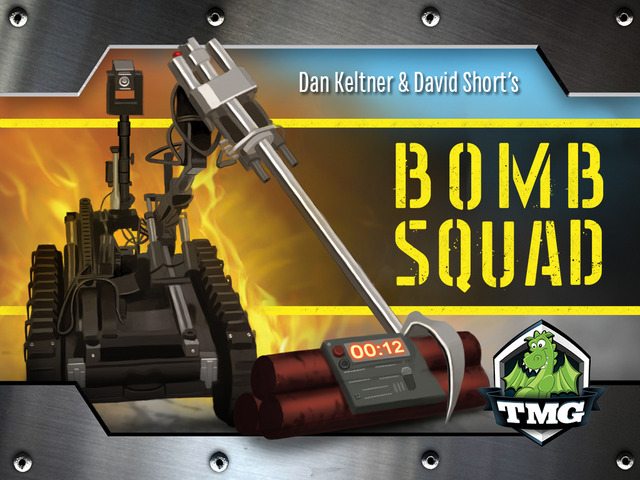 The clock is ticking—time is short, and lives are at stake. Your team must navigate the robot to defuse the bombs and free the hostages—but everyone is working with limited intel. Welcome to Bomb Squad, a new board game currently on Kickstarter that mixes elements of Hanabi and RoboRally.

At a glance: Bomb Squad is a real-time cooperative game for 2 to 6 players, ages 10 and up, and takes 30 minutes to play. It was designed by Dan Keltner and David Short, and will be published by Tasty Minstrel Games. The Kickstarter pledge level for a copy of the game is $35 (more for shipping outside of the US).

As listed on the Kickstarter page, the game comes with:

There is a stretch goal to add more role cards, and the team is also working on developing a timer app for the smartphone. I played with a hand-made prototype, so it’s missing the artwork and I just used an alarm on my phone for the timer.

The Robot Control Frame is a large border that snaps together to hold the square floor tiles in place. Each mission will tell you which floor tiles to use and where to lay out the various tokens.

One of the artists, George Patsouras, also did artwork for Flash Point: Fire Rescue, and you can see some similarities in the feel of the game, even though the mechanics are quite different. It’s a good style that helps set the tone of the game.

The latest rulebook is available as a PDF, or if you’re up for some printing and assembly, there is a Print and Play version also.

The game comes with a book of missions—each mission shows a different board layout and indicates which of the two robots you use, as well as the amount of time you have before the various bombs will go off. The goal of the game is to defuse the bombs before they go off, but you also get a higher score for rescuing hostages and having battery reserves left at the end of the game.

You set up the board according to the mission rules: there are walls, doors, hostages, and bombs, in up to three colors. (Everything is labeled with both a number and a color, so 1-2-3 corresponds to red-yellow-blue.) You also get a robot, and the corresponding card tells you how much battery it starts with and whether it has any special abilities or rules.

Each player gets a role card, which gives you a particular ability, and a hand of cards (the hand size depends on the number of players). One key part of Bomb Squad is that you hold your cards facing away from you, so you can see everyone else’s cards but not your own. This is to represent the limited information you have about the situation.

It’s also important to note that you’re not allowed to talk about strategy except during specific times—the idea is that you can only pass limited types of intel to each other, and talking about where or how to move the robot can give information about who is holding what types of cards.

There are four types of cards: Move, Open, Disarm, Rescue. Each one can be a level 1, 2, or 3, and you must match types. So to open a Level 2 door, you must use a Level 2 Open card. Movement cards will move the robot 1, 2, or 3 spaces in a straight line—if it cannot move that many spaces in a single direction, the card is wasted and uses up extra batteries—but we’ll get to that.

Gameplay is in real-time. Once you start the countdown timer for the bombs, you do take turns but you’re encouraged to think and act quickly. On your turn, you do one of the following:

To give intel, you pick an attribute: either Level (the number/color) or Action type. Then you indicate all of the cards in a single player’s hand that have that attribute. So you might say “these three cards are Level 2” or “these two cards are Move cards.”

When discarding a card, you can name one or two attributes and then place the card face-up in the discard pile. If you’re correct, you get to increase the Main Battery level one or two levels—but if you’re wrong about any of the attributes, you don’t get to charge it at all. Then you draw a card to refill your hand.

To play a card, you place it in the next available programming slot along the edge of the board face-down, and then draw a card to replace it. Your teammates see what you played, but you’re relying on intel and memory. If your card fills the last available programming slot, then the robot activates automatically; otherwise it just progresses to the next player’s turn.

You may also activate the robot on your turn: turn up all the face-down programmed cards. At this point, everyone is allowed to talk about strategy. You may rearrange the cards in any order; in addition, if there are five or fewer cards, you may also discard one of the programming cards at no cost. Once you’re done rearranging the cards, reduce the battery level of the robot by the appropriate amount. Then you use the cards in their new order to move the robot around.

You must be adjacent to doors, bombs, and hostages in order to interact with them. If you use an instruction that the robot cannot carry out, it’s an error, and you spend 2 extra battery levels. Finally, before you can open a door of a specific level, you must have saved at least one hostage of that level, otherwise the Open Door action is an error.

Once all the instructions have been performed, the cards are discarded and gameplay continues.

If you run out of Main Battery on the robot, you start using up Reserve Battery, which cannot be recharged. If all of your batteries run out, or if a bomb goes off, the mission ends and you lose. If you disarm all the bombs, the game ends.

If you succeeded in disarming all the bombs, your team can also get a rating (up to 5 stars) based on the number of hostages rescued and amount of Reserve Battery left.

Even without the polished artwork, Bomb Squad really shines. As you may already know, I’m a fan of cooperative games, and I love the pressure and tension that come with real-time games. Unlike some real-time games, Bomb Squad still uses a turn order rather than a free-for-all, and you’ll find yourself caught between trying to remember the intel your teammates gave you and what intel to give another player.

Because of the high-pressure circumstances, a lot of the time you’ll end up giving a teammate intel that they were just given by somebody else, especially if you’re spending a lot of brainpower just remembering what cards you’re holding. But if you pay more attention to your teammates’ cards, it’ll come to your turn and you won’t remember a thing about your own cards.

Programming the robot is also a tricky business, because you only know for certain the cards that everyone else has played. You might think you played a “Move 2” card, but everyone else knows that it was actually a “Disarm 2” and they’re trying to figure out how to ensure that the robot can actually get to a Level 2 bomb so it won’t be an error. The more commands you run at once, the more efficient the robot is; however, that ability to discard an erroneous instructions card is very useful, too.

The other thing that happens is that somebody will play cards to Rescue, Disarm, or Open, since they can see those things on the board—but then everyone has to work together to move the robot to those places within the limited number of cards available. Often, you’ll have too many of those interaction cards, and not enough slots left for Move cards, resulting in a pile of errors.

Keeping track of the battery level is also crucial. When you finally figure out a card in your hand, you have to decide whether it’s more needed as an instruction or to recharge two battery levels, particularly if the robot has just been activated recently and needs recharging. In my plays, most players just went for the single attribute to recharge one battery level, rather than risk getting it wrong—but it then takes that many more turns to get the battery level full.

Obviously, memory plays a huge role in this game. People try to rearrange their cards and hold them at different angles to help them remember what’s what—but as soon as you play or discard a card and draw a new one, all bets are off again. And then trying to keep track of which cards were already played to the programming track… if you don’t have good memories, you definitely won’t survive.

There are a whole bunch of missions included, with a little flavor text from Sarge, and they’re challenging enough that the game will have a lot of replay value. So far I’ve only played two of the training missions and we’ll definitely need some more practice before we’re ready to move on to the harder ones.

I also liked the different robots: one can move and interact diagonally, but has less battery to begin with. And there are training and expert versions of each robot—the expert side is very difficult, at least for this bomb squad novice. But I’m excited about the possibility of getting good enough at the game to use them.

The one thing that feels weird is mostly a thematic thing: I know that the blind card plays and intel are supposed to represent the fact that we all have limited knowledge of the situation and we’re working to piece together a whole picture. But practically, all of us can see the entire board and where bombs and hostages are, and we’re all programming a robot despite the fact that we’re not sure what we’re telling the robot to do. I’m not saying that it feels like a pasted-on theme, because it doesn’t; it’s just that the actions that players take don’t feel like they really correspond to actions that a real bomb squad would be taking. It’s not simply a level of abstraction like there always is with board games; it’s more that there are parallels that don’t quite match up. But in this case, I’d call it a minor intellectual quibble because the feel of the game is excellent.

Overall, Bomb Squad looks like a fantastic addition to your cooperative game shelf. It uses a mix of game mechanics that add up to a very satisfying whole, and everyone I’ve played with agrees that the gameplay is intense and exciting. 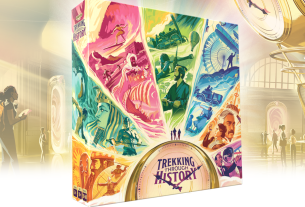 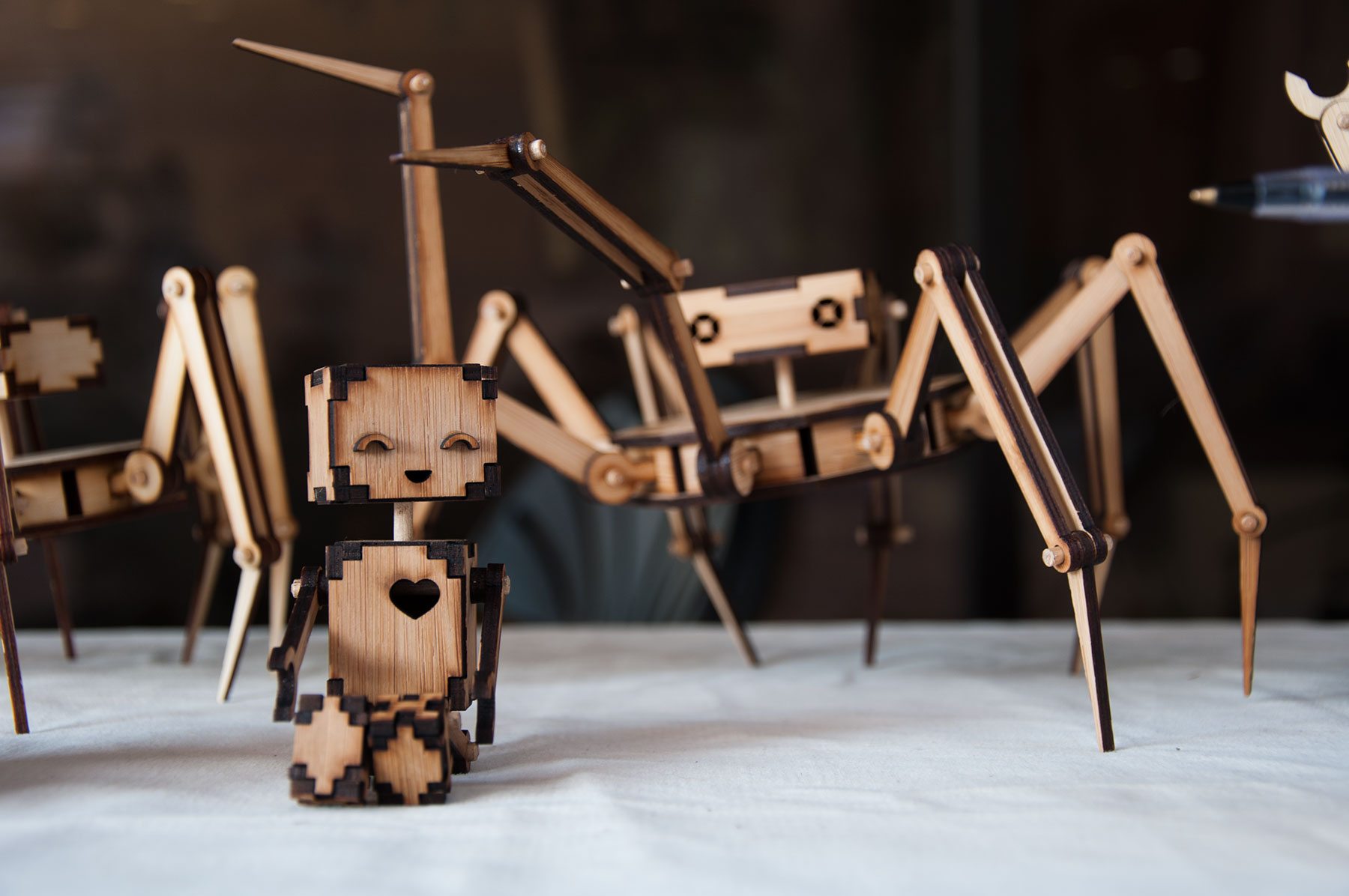