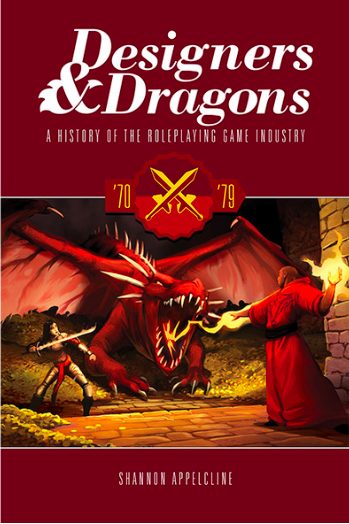 If you’re like me and are fascinated by the history of role playing games (RPGs), the folks over at Evil Hat Productions are about to make your day. I’ve written recently about some of the current books available that focus on the history of RPGs, but I’m a firm believer that we can always use more.

More? How about four new books, each focusing on the gaming companies that formed in the 70s, 80s, 90s, and 00s? And these aren’t little thin volumes that quickly summarize the histories and individuals who were involved in the development of the hundreds and hundreds of RPGs since the 70s, either! The first volume comes in at 400 pages, and I’ve just finished reading it. In a word… outstanding!

Written by Shannon Appelcline, the four-volume Designers & Dragons series is described as the comprehensive history of the role playing game industry. After finishing just the first 400-page Volume 1 (that covers companies developing RPGs in the 70s), I am blown away by the level of detail and the amount of research that has gone into the series. It doesn’t read like a boring history book, either… plenty of first-hand accounts are shared, and the layout is perfect. Each company gets its own chapter, with each chapter broken down into specific sections that focus on a particular game or a particular short period of time when things were going great… or not so great. The good and the bad are covered, and facts are laid out in an unbiased manner. But don’t take my word for it — check out the new Kickstarter for yourself. Backers at the $15 level (and higher) will be able to download the first volume (1970-1979) immediately and read it themselves.

The Kickstarter has less than 36 days to raise the funds needed to see this history made available to fans. There are probably enough GeekDad.com readers alone to make this a reality — for $15, you can get PDF copies of all released volumes when the KS project finishes. (Print copies can be obtained for $25 per volume, and the $85 level will get you print copies of all funded volumes — crossing fingers all four volumes are funded!)

Point a web browser to the Designers & Dragons Kickstarter and pledge your support if you’d like to dig a bit deeper into gaming history. The best part is you can begin reading Volume 1 immediately at the $15 level (or higher) and see just how great a job Shannon Appelcline and the Evil Hat team has done on the writing, editing, and layout.

Kids Can Learn Skills, Build A Project For Free At Lowe’s