I’m going to do something strange here and point you to another article to read before mine. It’s a recent post by fellow GeekDad Ethan Gilsdorf for NYTimes.com that discusses the influences of Dungeons & Dragons on a number of well-known and influential writers. Check it out here, and I’ll wait…

The post was a great read, and it hit home for me personally. I’m a full-time nonfiction writer (technology)… not a full-time fiction writer (yet). But over the years I’ve had opportunities to write a few fiction pieces that required me to create a few worlds, flesh out some fun characters (good guys and bad guys), and basically have some fun as a storyteller. Those chances don’t come often enough in the nonfiction writing world, but I must still admit that the handful of years that I spent as the Dungeon Master (DM) for a small group of friends as they explored dark spaces, fought horrible monsters, and discovered fabulous treasures… those years were money in the bank as the skills they provided to me have never faded away.

Believe it or not, putting an adventure together is not all that far off from putting a book together. From my days as a DM (and even a player), I was learning how to organize my thoughts, how to properly outline a story’s progression, and (hopefully) how to engage the players. I’m doing the same thing today when I sit down to pitch a book proposal to a publisher and, ultimately, educate a reader with the final product. It may sound like a stretch, but it’s true, and Ethan’s article was absolutely correct in stating:

The Dungeon Master must create a believable world with a back story, adventures the players might encounter and options for plot twists. That requires skills as varied as a theater director, researcher and psychologist — all traits integral to writing.

A few days ago, as I was pondering Ethan’s article and thinking back to those wonderful days before discovering girls, cars, and other distractions, my doorbell rang. Sitting on my doorstep was a small box. I couldn’t remember ordering anything recently, but it had my name on it. I opened it up and couldn’t believe my eyes — a friend had ordered a gift copy for me of the Dungeons & Dragons Starter Set (right, below photo) that was just released from Wizards of the Coast.

Maybe it wasn’t that amazing of a coincidence (Ethan’s article does mention the new release which has made the news in geek circles), but it certainly was surprising enough to cause me to sit down for a few hours and read through it all with a huge grin on my face — my first thought was that some lucky kids were about to have their world changed. When I was done, I thought about another box that had changed my world. I immediately went to my office, pulled that box off the shelf, opened it up… and took a trip back in time to 1981.

At that time, there was just D&D — The Basic Set (left, below photo) from TSR. That cover showing a wizard and a fighter preparing to take on a red dragon (that was sitting on a pile of treasure) couldn’t have been more enticing to me. While I quickly moved on to AD&D (Advanced D&D) with the release of the Player’s Handbook, Dungeon Master’s Guide, and Monster Manual… in the beginning was the blue manual. And it was good.

Along with the blue manual were a few odd-shaped dice and another thin booklet, module (adventure) B1 In Search of the Unknown. A later version of the box would swap out B1 with B2 The Keep Beyond the Borderlands. (At some point or another, I ran these modules as DM.) Interestingly enough, the box had a recommended age of 12 and up — the same age that’s on the new Starter Set. I was 12 and in 6th grade.  I have clear memories of tucking the blue manual and module B1 into various notebooks and then into textbooks in certain classes, especially English (the irony). A year later I would get busted reading the first Dragon magazine I ever purchased (issue 48) in Mrs. D. 7th grade English class and sent to the office. And I still stand by the statement I made later to my parents that I learned more about writing from that issue than I did the class. Sorry, Mrs. D.

That blue book (with the same dragon graphic from the box cover) took a beating. The cover is still intact, but the spine’s edge is questionable and I may be forced to apply some clear tape in the future to hold it all together. Inside, the black and white hand sketches set the tone, and I do recall actually creating an adventure to the Domed City that used the side view of Stone Mountain with its Stone Skull entrance as an example of creating a dungeon for players to explore. The entire book was 48 pages in length, and I’d be willing to wager I’ve read it cover to cover more than two dozen times. 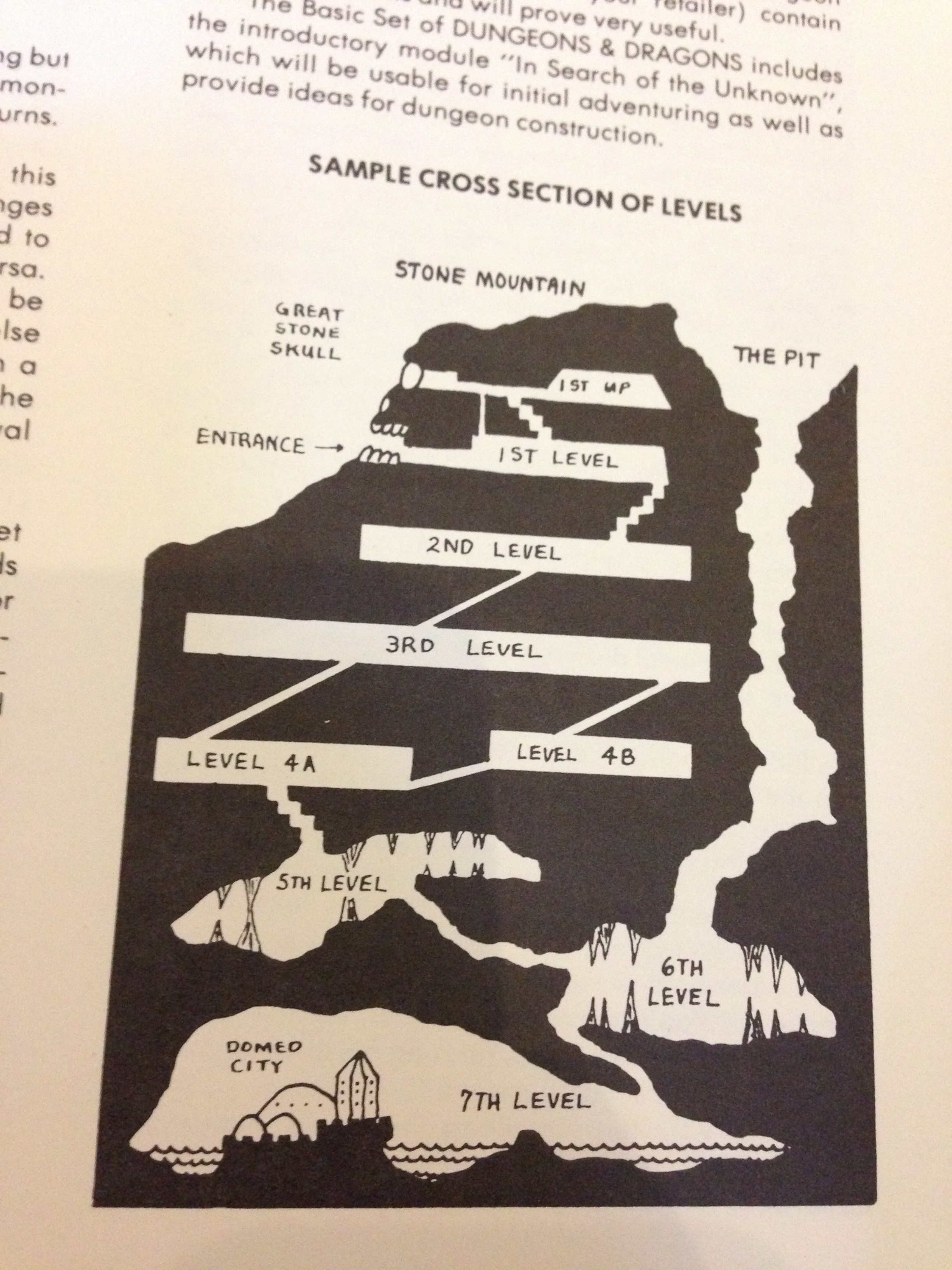 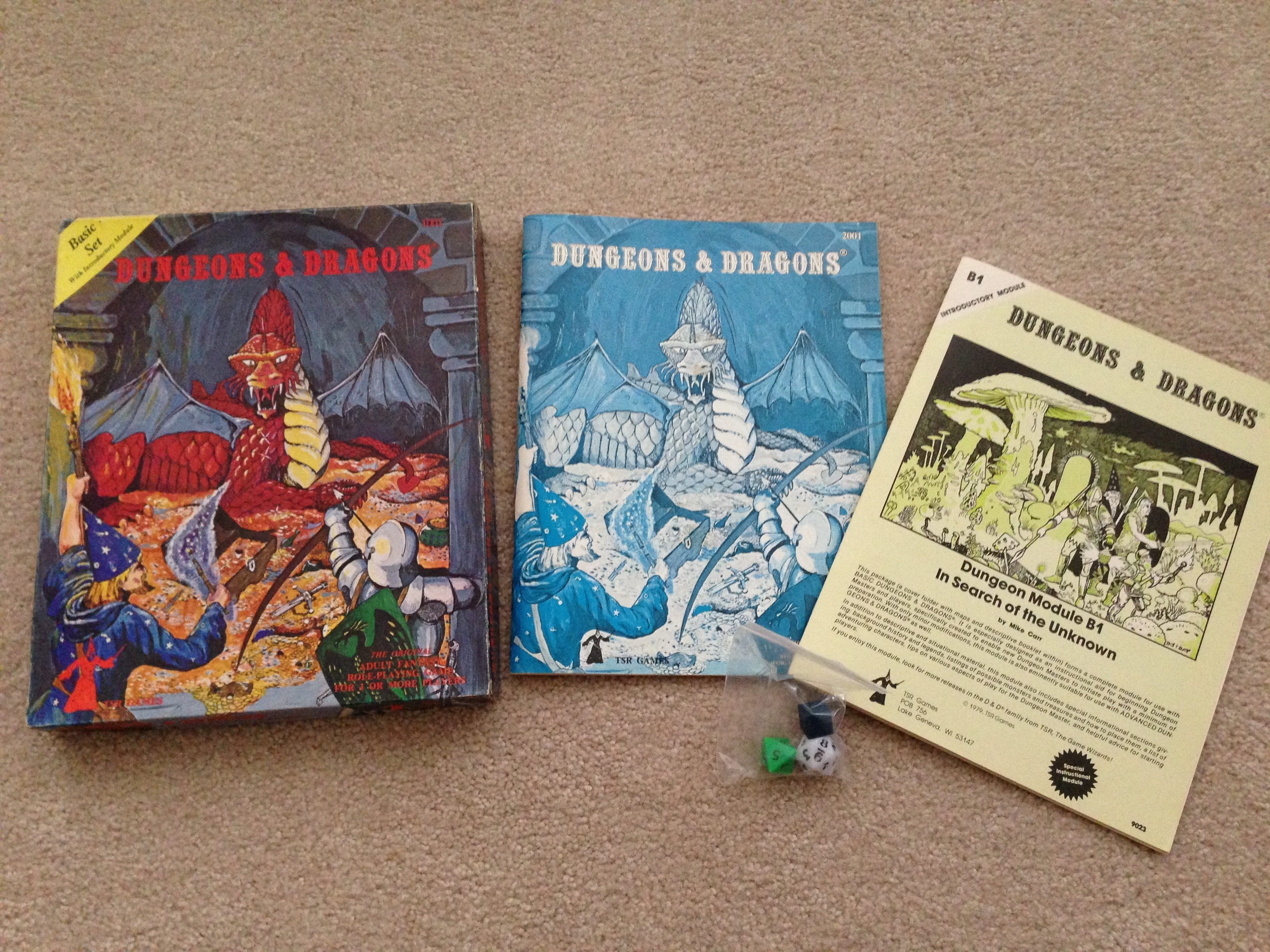 Modules back in the day were pretty slick. Usually the inside of the bi-fold cover contained a map (or maps) of the main dungeon or area to explore. Later, more advanced modules would include multiple maps and even small booklets containing images that could be shown to players. One of the more memorable was Tomb of Horrors, but I wouldn’t run that one for a couple of years… well after my group had moved on to AD&D. But B1 was all I had at the start, and I recall creating multiple spin-off adventures just from that single 32-page booklet. 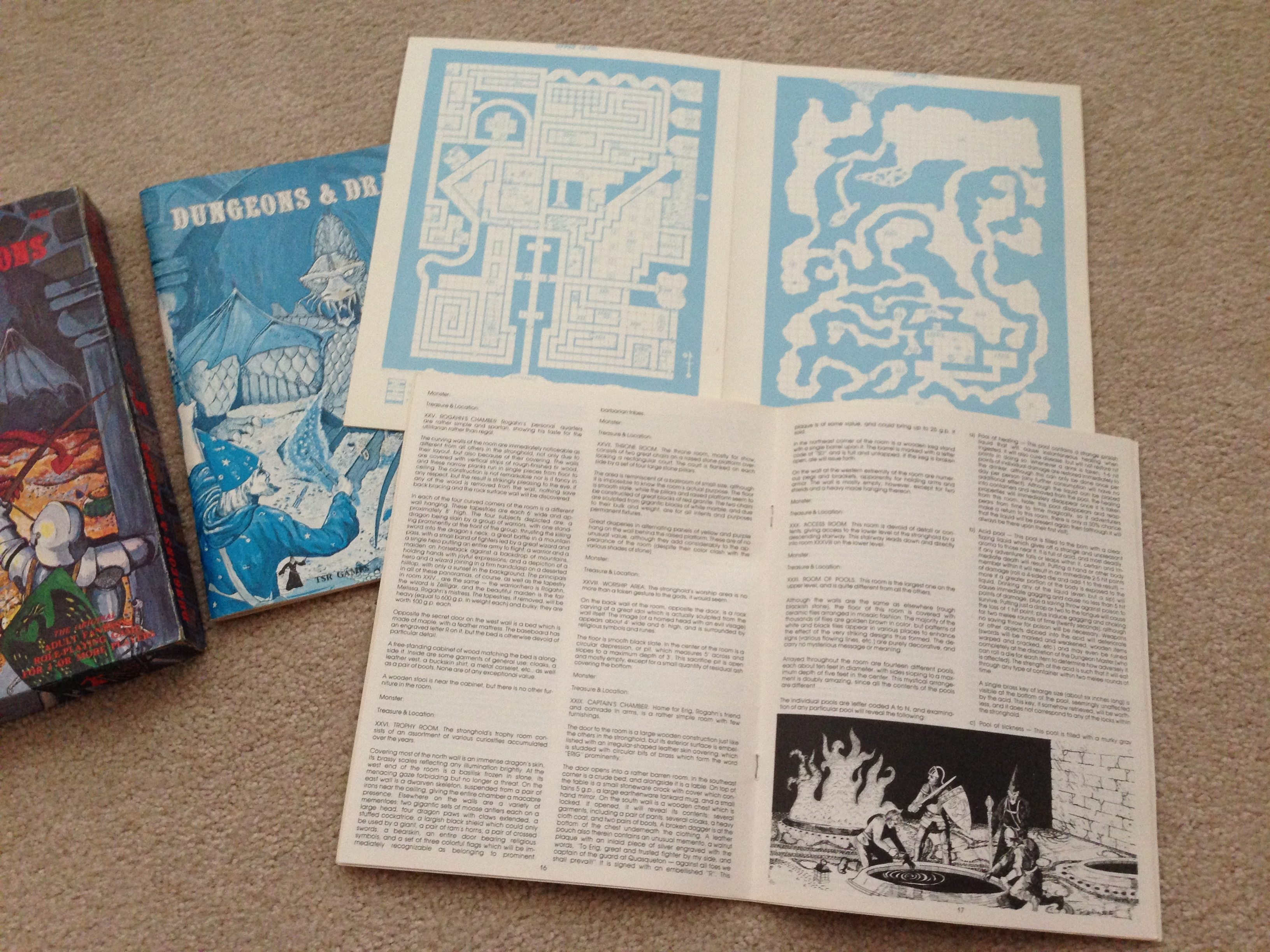 The Basic Set provided an incredible amount of entertainment for a very low price. My parents probably never could have imagined that a purchase of less than $20 would have such an impact on my life and, ultimately, even my career.

As I was reminiscing about the D&D Basic Set, I was also wondering what today’s kids would think of that box. Its design, especially the artwork and layout of the text, is certainly dated. But really it isn’t about the design… it’s about what that box offers (or offered). Storytelling. An escape. A fun game. A chance to spend time with friends. It sounds a lot like today’s video games, but there’s really something missing with video games. A few video games might offer players the chance to create a unique world (Minecraft comes to mind), but really video games walk too narrow a path to be fairly compared to role playing games (RPGs) like D&D. Some games might allow you to explore a large area, go where you wish to go… but the programming is still going to have its limits. Players can exhaust their options with enough game time, and should they decide on an action that the programmers didn’t allow for… well, the player is out of luck.

Not so with RPGs. With D&D, the limits are really those of the DMs imagination and the players’ whims. To be a good DM, you had to learn quickly that what you wrote on paper often got tossed out the window when players decided to try and sweet-talk the Big-Bad-Monster instead of fighting it. Just when you thought you’d created a worthy adventure for your players’ noble characters, they’d make the choice to return the princess and steal the king’s treasure and head for the border while everyone was celebrating. And you know what? Those adventures made for the most fun times and the most talked about around the lunch table.

But back to today’s kids and that old school D&D Basic Set. Thankfully, all is not lost. The TSR name might not be around any longer, but Wizards of the Coast isn’t letting the legend die. With the release of the D&D Starter Set, a new generation (plus the previous ones) now has the chance to discover the game for themselves. And, just like the Basic Set, the contents of the new box aren’t overwhelming to new players — inside are the 32-page Starter Set Rulebook, the impressive 64-page adventure/module titled Lost Mine of Phandelver, and five pre-rolled characters that include two fighters, a wizard, a cleric, and a rogue… all level 1. (The character sheets are, themselves, some of the most fun reading as they include background information and specific instructions on how to play that character such as leveling up details, character flaws, languages spoken, and much more.) 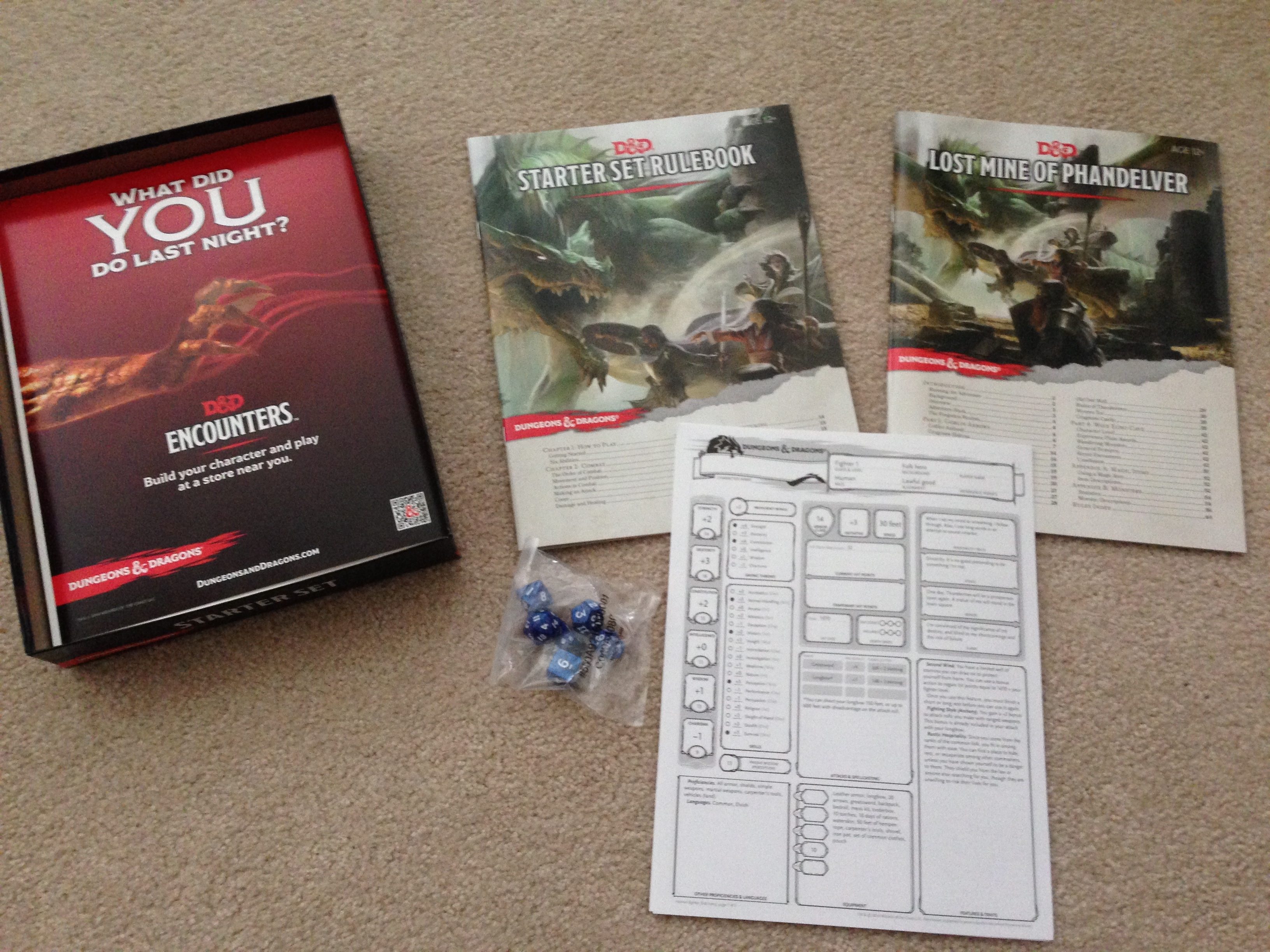 WotC has obviously made it easier to jump in and get started playing D&D. The rulebook is a fast read, and even the module is broken into parts (four in all) so that a new DM can get up to speed quickly and begin running an adventure fast. And let’s face it — the full-color artwork and eye-catching graphics are so much more appealing! (I had to type up my own character sheets for my players — they were awful, but I’d still love to have one today.)

The Lost Mine of Phandelver module is outstanding. I’ve read it through, and I’m quite impressed with how the the layout is designed to make it easy to find what to read to players (white boxes), what only the DM should know (basic text) and the brown box sidebars that provide additional “secret” info (such as “What the Goblins Know”) that help to really flesh out an adventure. The maps are in full color and are extremely detailed, way beyond those early-day modules. My hope is that future adventures keep this style — I think it will be a big hit with new players as well as old. 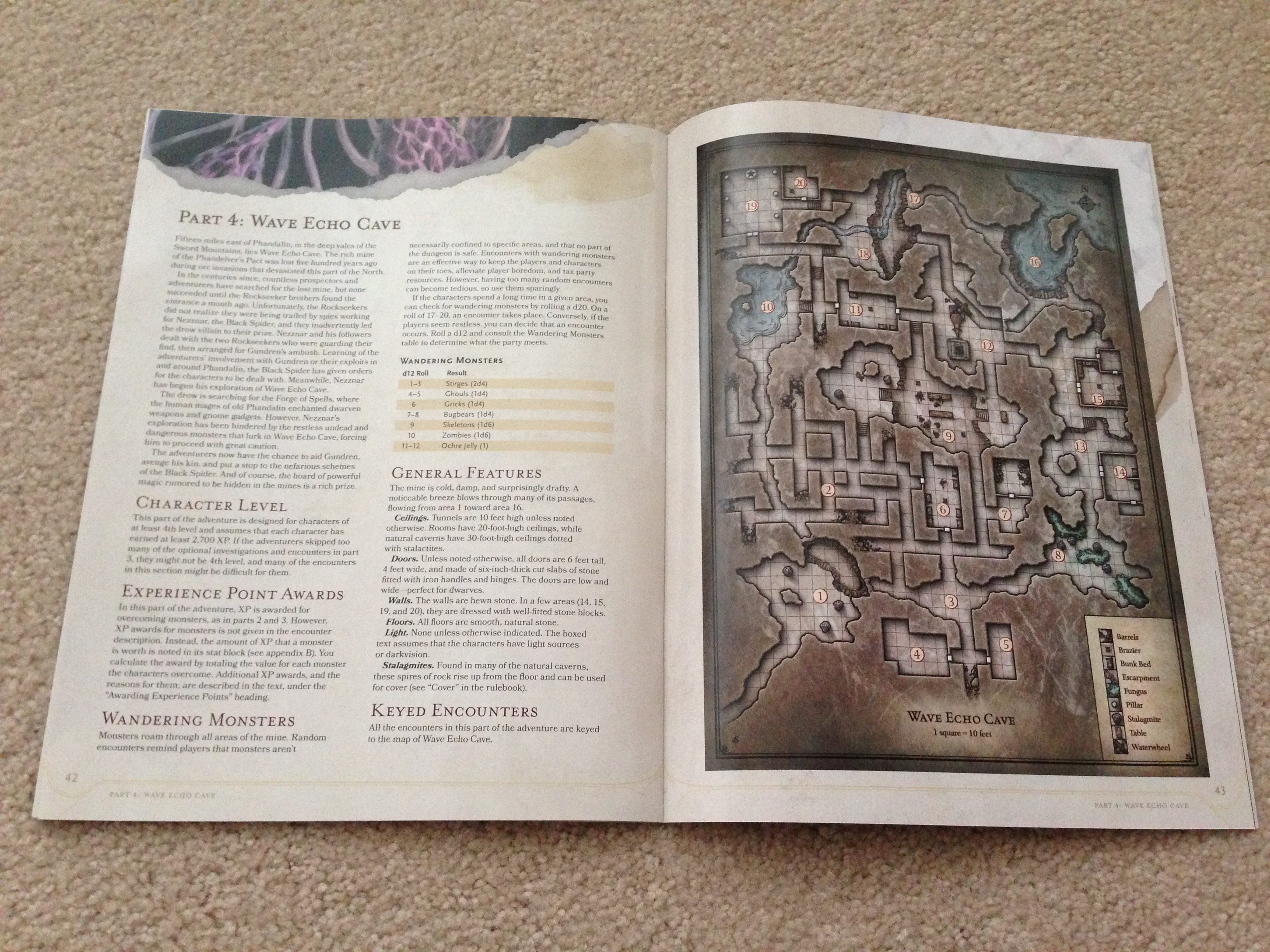 I found out yesterday that my neighborhood comic book store is going to be hosting the Phandelver adventure for novices over the next six to eight weekends. Parents can bring their kids in and sit down and play a game of D&D and discover the new ruleset together. Imagine that!

My oldest son is 7… not yet ready for D&D (or at least I’m not ready). But one day. In the meantime, I’m going to slowly introduce him to the world of RPGs with a new one designed just for kids — Adventure Maximus. I backed the Kickstarter, got the game, read the rules, and was amazed… I wish I’d had something like it when I was 7! The game actually provides a map for the young MM (the Maximus Master) to create an adventure and tell a story to his/her friends who create characters using a system of cards that provide race, class, weapons, and special skills. (I’ll be doing a more detailed review of Adventure Maximus in the next month or so — stay tuned.)

Let’s return to Ethan’s article… D&D is the game that many of us in certain industries can point to and say “that’s where it started for me.” Playing D&D pushed us (DM and player) to use our creativity and to stretch it and trust it. It doesn’t surprise me that many adults who work in creative circles continue to point to the game as inspiration. My hope is that a new wave of D&D players may also one day be able to point back at the Starter Set box as a source for their own creative endeavors. Only time will tell how this new version of D&D is received, but I’m hopeful. 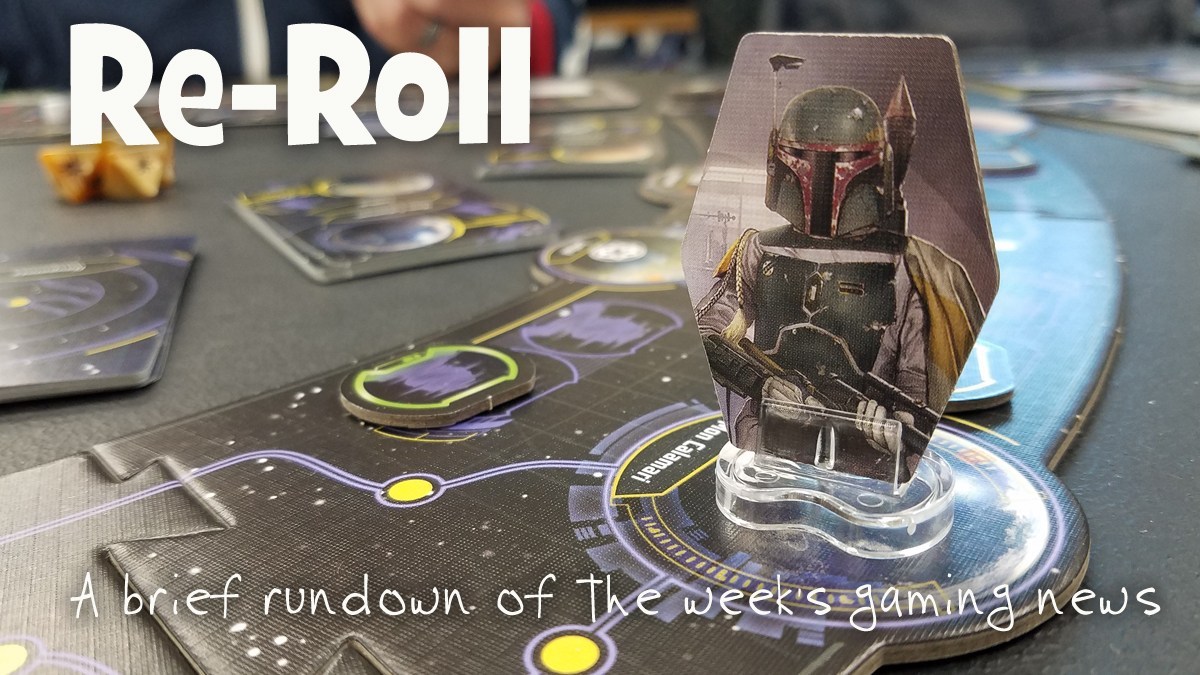 Phineas and Ferb Take On a New Season in Christmas Vacation

12 thoughts on “Old or New Version, D&D Is Still Inspiring”