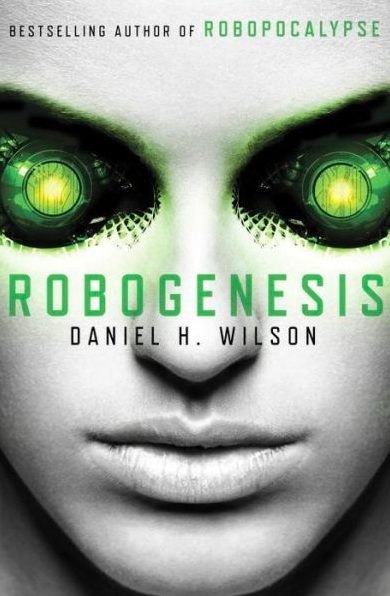 I have been looking forward to this book (published today) for a reeeeeallllly long time. I think I saw the cover well over a year ago, and I’ve been itching to find out what happens next for the characters in Robopocalypse. Keep in mind that much of what I’m about to share next contains spoilers from the first book — if you’ve not read it, skip ahead to the section labeled What About Robogenesis. Consider yourself warned.

[You can read my original review here.]

So, Robopocalypse finished up with the destruction of Archos-14, the evil AI who took humanity to the brink of extinction before being taken out by one of the Freeborn, robots originally controlled by Archos-14 but that later achieved sentience. Careful readers most likely detected a key event that would signal that the dead aren’t always dead. And there’ve been enough movies and fiction stories about evil digital beings making backups of themselves that no one should be surprised… Archos-14 lives.

With the first book, readers were given snapshots of various events around the globe that were deciphered and collected in the Hero Archive by New War survivor, Cormac Wallace. These stories told how Archos-14 came to be (well, version 14 of it, at least) and how our reliance and trust of our technology was our own greatest weakness. By the end of the book, humanity exists in small clusters that are readying for the final assaults by technological monsters designed to specifically mail and mkill humans. The Gray Horse Army from Oklahoma, consisting of a mix of Native Americans and refugees from around the country makes its final attempt to destroy Archos-14 in Alaska. With technical assistance provided by a young lady with some unusual modifications forced on her by the AI, humans prevail. But is the war over?

Robogenesis, while a sequel, is both a retelling of the events in Robopocalypse as well as the fallout. The entire novel is broken into three parts, with each part focusing primarily on one of the major characters from the first book. I have to be careful here, because there’s a huge spoiler opportunity that looms… just know that the New War may be over, but there’s a True War that has also been raging in the background, with two parties vying for control of planet Earth.

While readers will get additional details about how the robots came to both control and (almost) destroy humanity, what really stood out for me was the focus on the Freeborn, those robots with free will and the ability to choose who (or what) they serve. There’s a lot of thought material here — what do we as humans do should we create an intelligence that can think for itself? What do we do if that intelligence believes it can function on its own without our input? What if that same intelligence decides it knows what is best for humanity? And what if what’s best is our complete elimination?

The book does make a slight jump in terms of technological breakthroughs — the first book felt like the world it portrayed was right around the corner. Maybe 2015 or 2020. But Robogenesis felt like a huge jump had occurred even though there was only about a year that passed at the novel’s most distant events from the first book. An artificial intelligence is likely to bring about some new technologies, I have no doubt, but much of the weapons and vehicle discussions (used by humans) came off as just a bit too advanced for the time that had passed between the two books. It didn’t prevent me from enjoying the story, but having just re-read Robopocalypse a few weeks prior to reading Robogenesis, it stood out.

Is the story over? Not in the least. I’m not sure where Wilson will go next, but he left a small number of loose ends that I’m anxious to see tied up. Again, to say anything more specific would make for one, make that two… huge spoilers. There are new players in town, let’s just leave it at that.

If you enjoyed Robopocalypse, you’ll enjoy Robogenesis. If you’ve ever given any thought to where humankind might be headed should we continue to develop AI technology, this story is sure to make your eyes widen and give you pause. I know I’d like to think that an actual AI would also come with a high level of compassion and benevolence, but that’s not guaranteed. Here’s hoping that humans proceed with caution.

Note: I’d like to thank Todd D. of Doubleday for providing an advanced copy of Robogenesis.

Free ‘Teach Kids to Code’ PDF and an Amazing Contest!