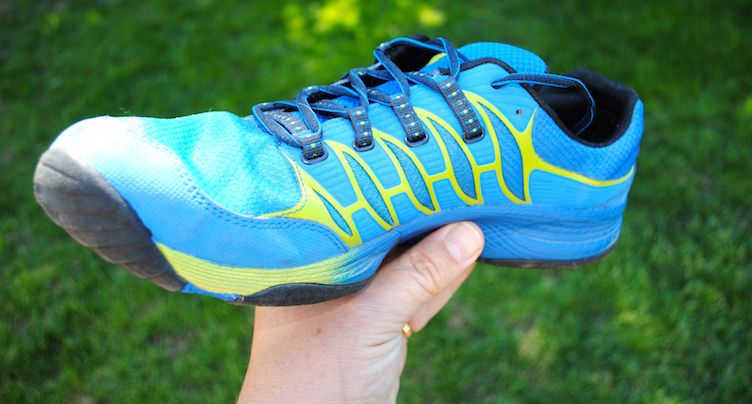 Merrell dropped me a line a while ago asking if I’d be interested in trying out a pair of their new All Out Fuse trail running shoes. I was on board, not just because I’ve yet to come across gear from the company that I don’t like, but also because I’m always on the lookout for a comfortable pair of athletic shoes for wearing around the house. That may not sound like it’s a demanding criteria, but I work from home, I’m up and down the stairs constantly through the day and I try to spend an hour or two of that time while working on a treadmill desk. I also do a lot of walking and light hiking on evenings and weekends. In both cases, the Merrell All Out Fuse trail runners excelled.

Tromping up and down from my basement office to other floors in the house is something I do a lot on a daily basis. The kids come home from school for lunch, the dogs need out during the day, there are always couriers at the door and I make frequent coffee trips (keeping the coffee maker in the kitchen and not conveniently in my office is by design).

And then there’s the time spent walking and working on my treadmill desk.

I prefer to wear running shoes during the day because they’re light, they’re comfortable and I don’t have to keep switching shoes to hit the treadmill or go for a walk. Plus, when you’re a guy who works from home, slippers just give people the wrong idea…

The Merrell All Out Fuse trail runners cover those basic needs off nicely. According to my kitchen scale, these shoes weigh about 16 ounces — and that’s for both shoes, not one. The trail runners I’d been wearing previously come in at 26 ounces (and they seemed light at the time), so there’s a real difference there.

They are not just light, but extremely flexible. Think barefoot style, but without the five-finger look. They do have some midsole support, but otherwise feel very flat compared to the built-up support on some runners. Overall, it’s a snug and more natural feel that does take a bit of getting used to.

I’m not a runner, so trail running shoes like this might be somewhat wasted on me. Still, I frequently put five miles a day on them through walking and also wore them on light trails. The All Out Fuse shoes fit like a glove, my feet never felt sore, the mesh made them quite breathable (and dries quickly) and I found the flexible soles made me feel very sure-footed on stairs and when climbing obstacles. Despite the glove-like effect, they are cushioned enough where it counts and also have a protective toe-cap for when those tree roots don’t move out of the way quickly enough.

Treads are also nowhere near as aggressive as on other trail runners I own. They still offered excellent traction outdoors (Merrell employs its M Select GRIP technology), but that modest and even lug pattern means the All Out Fuse works well on paved trails or indoors too.

The cool color scheme doesn’t hurt either (maybe this is my midlife crisis, but I’m digging brightly-colored shoes these days) — the pair Merrell sent were blue/lime.

The only downside to switching to these shoes over more traditional runners as my daily  regulars is that I had to break down and buy ankle socks. With a shoe as minimalist looking as the All Out Fuse, pairing with regular athletic socks is not a good look. At $110, they aren’t cheap, but they’re capable, comfortable and so light and flexible that I forget I’m wearing them.

Disclosure: Merrell provided a pair of All Out Fuse shoes for review purposes.