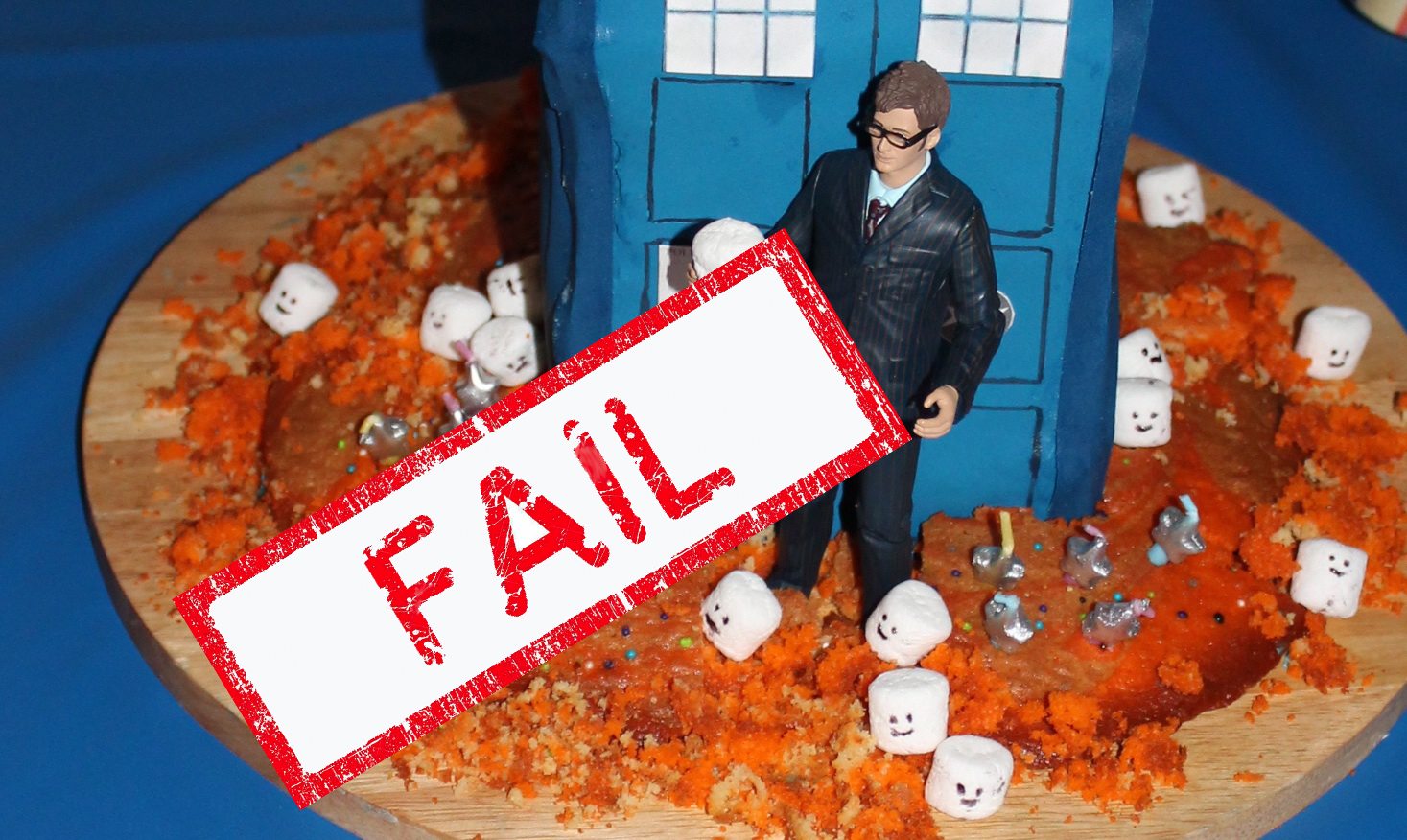 I work well in all artistic mediums, except the ones that are perishable, sticky, and tasty.

I learned this sad fact nearly 10 years ago, when my daughter and I ran across Ace of Cakes on one of those rare summers when we actually had cable. My oldest daughter was 4 at the time, and she was enthralled. Every Death Star replica or over-the-top wedding cake was a wonder to behold. Next year, when her fifth birthday approached, she remembered a Mad Hatter-style cake that had rolled out of Duff Goldman’s kitchen and looked at me with hopeful eyes.

“Can you make me an Alice cake, Mom? I want a mad tea party,” she pleaded.

“Mom’s creative,” my husband replied. “She can do that easy.”

I must have looked at him as if he was trying to stuff a kitten in a blender, because he recoiled quickly, and kept quiet for the rest of the day.

The request got me thinking that maybe I could master this skill, and so began my misadventures with custom family cake-making.

Cupcakes have never been a problem for me. Throw on some icing, random thematic garnishes and trinkets, and send ’em off to school or the party. There was even one Ratatouille-themed birthday, when I completely abandoned a regular cake. Instead, I let party guests design their own cupcakes to display on a tiered “cake” made of hat boxes. This looked great until we lit the candles on the birthday girl’s cupcake, setting a little paper “Remy rat” on fire, to a gleeful (and frankly disturbing) chorus of 6- and 7-year-olds chanting, “Burn the rat! Burn the rat!”

Perfecting the actual full-sized party cake continues to elude me. Actually, that is an understatement. It mocks me.

There have been some mild successes, some near misses, and some not-even-close attempts. There have been toppling Rapunzel towers and a sugary Smaug’s lair. There was a castle so unstable that I wouldn’t let my worst enemy live there, and a big, colorful, candle-lit mess that may or may not have been a Kaiju claw descending from the Pacific Rim.

One Guitar Hero cake we made for my husband’s 43rd birthday would have been nearly perfect, except I ended up making an elaborate graffiti-style message wishing him “Happy 4-E.” Great for a new classroom or office, not for a birthday.

This year, however, was extra special, because it was not only my oldest daughter’s 12th birthday, but Doctor Who has been her first real adolescent fandom—complete with her first celebrity crush (David Tennant). She wanted a TARDIS cake and I intended to make her one that she would love.

I even set the scene, with a full-sized Tenth Doctor cardboard standee wishing her birthday greetings when she woke up that morning. I wanted this TARDIS cake to be perfect. I had fooled myself by thinking, “How hard can a rectangle box be?” At that point, a little Chef Duff crawled into my head and commenced to trash-talk my efforts.

You’re in for a rude awakening, amateur. I take my skills on tour…like a rock star.

I had looked up several TARDIS cake ideas online, each more elaborate than the next, and started to lose confidence. There was even one birthday cake given to Eleventh Doctor portrayer Matt Smith that was so elaborate, he could have shrunken down and walked into it, if he was so inclined.

I started the project after the girls had left for school. I had it all figured out in my head. I baked a few orange-colored mini cupcakes to place in the main cake batter, so it would resemble the TARDIS walls. I was pretty proud of myself, until I put the main yellow sheet cake in to bake, and began assembling my Ninth Doctor standee for party decorations. My daughter doesn’t care about him, but standees are cheaper when two or more are purchased—at least that’s what I kept telling myself. Anyway, he must have been a little too distracting, because the inner Duff gave me a snarky little wake-up call when the cake was more than half done.

You forgot to put your orange spots in the batter, moron…I’ve made a cake for Steve Carell.

I tried to remedy this, but the cake came out of the oven with the orange dots only half-adhered to the batter. I had to make due with the lumpy results. While it cooled, I used some pre-made “sugar decorating sheets” to cut out the TARDIS walls. These can look smooth, but tend to taste like construction paper.

I cut out the first two sides on one sheet with little problem. However, when I opened the other package, I realized it was a different color blue, thanks to having to get two different brands to have enough sheets. I had also forgotten to purchase a food pen and had to draw the details on in felt-tip marker. Luckily, I was planning to peel the “sugar shell” off before eating it.

I used cardstock images to create the details I would attach after the walls were on the cake. I then used actual blue construction paper to make the roof, and placed a little portable LED light string through the top. I used some clear tape for a makeshift light bulb.

Copping out with printed images? Really? Okay, but I have a line of merchandise and cake products…some of which you’ve bought in the past, sucker!

I set the walls aside and cut the sheet cake into four squares, which I stacked in order to make a TARDIS shape. I held up The Doctor action figure I planned to put next to it, and he was dwarfed by the cake. It looked like The Doctor had regenerated into a toddler.

I used a sharp knife to slice the cake’s sides and top down to size, and placed the remnants in a plastic bag for later cake cravings. Then, I mixed some plain icing with a drop of blue food coloring and iced the sides. It was a blue, sticky square that resembled a TARDIS as much as a moose resembles a couch. Maybe, when I get the sides up and roof on it, it will work.

That’s going to fall apart. Put a stake in it, you idiot. I’ve used stakes in the cakes I’ve made for movie premieres…you know…in Hollywood?

I pulled chopsticks out of my purse from last night’s Chinese food “date night,” cleavered them down so they wouldn’t poke out of the top of the cake, and got a sliver in one finger trying to edge it in one of the corners. I had never gotten a splinter baking a cake before, and hoped it wasn’t a bad omen.

Try to be a little neater. I try to be neat, even for a rebel. I used to be a graffiti artist. Yeah, that’s right.

I lightly attached the sugar sides to the cake and gave them corner edges with extra decorative sugar. I placed the paper roof on and clicked on the little light.

Once I got the cake assembled, I assayed my progress. At best, it resembled a paper model made by a grade schooler as part of a class project. All I could think of was this TARDIS materializing in London, making not the traditional “Whoosh…whoosh…whoosh!”  sound, but rather “Derp! Derp! Derp!”

Finally, while trying to figure out how to stand The Doctor up, who was getting a little too “wibbly wobbly” for the cake base, I became so frustratingly overwhelmed, I tossed the little Time Lord aside and stormed out to the kitchen.

Way to give up…did I mention I have a whisk tattoo? Tats are cool.

“And you can shut your big celebrity chef mouth,” I thought to the little annoying Duff in my head. I retreated to bed and looked through scrapbooks of past birthdays, for either inspiration or self-torture. I really wasn’t sure which.

As I went back through my photos of what I considered “epic cake failures,” I got a little depressed looking at the poor excuses for culinary art I had concocted for my kids, husband, parents, and even in-laws—and wondered why I even bother anymore. They were lopsided, bumpy, occasionally sunken, and just plain weird. What was I even thinking?

Is this TARDIS even worth the effort or should I just take a store-bought cake and stick a plastic toy time machine on it? I was ready to just write this one off, when I noticed something in nearly every photo that turned my tears of defeat into misty-eyed joyful memories.

In each picture, one of both of them is admiring the cake, their cake, with wide-eyed surprise, or posing proudly by the item created just for them. It didn’t matter if the cake didn’t live up to the high standards set by professionals and celebrities. It was their cake, something Mom made them, because she loves them.

I soldiered on like a true Time Lord and supplemented the “epic mess” with some cake crumb Gallifreyan landscape from leftover parts. I added frosting faces to some mini marshmallow adipose creatures around it (the Whovian “cute creature” equivalent to Tribbles or Ewoks), placed it in a setting of themed wrapping paper, decorations, and the two life-sized Time Lords.

I placed a heavy mug behind the slightly slumping TARDIS to prevent it from keeling over while I was out, shut a table-jumping cat in the bedroom, and went to pick up my girls from school.

“Oh, my gosh! I love it, Mom,” my daughter said as she ran towards her birthday corner. “And it lights up!”

Sure, little sister immediately speared the side with her finger. Sure, the adipose were eaten before the candles were even lit. And The Doctor figure, which was ordered on eBay no less, burst into flames during the customary “Happy Birthday” song, giving me rat-burning flashbacks. None of that meant a thing. The Doctor escaped with minimal cuff damage, and the cake was cut into and consumed in 12.5 seconds after the end of the singing.

The cake was beautiful and perfect, because my daughter loved it. No one or nothing else should even matter. Besides, it was a cake, to be eaten.

As I hugged my new 12-year-old, I could hear Chef Duff again. Only this time, my perceived arrogance in his tone was replaced with encouragement.

Playing in the Sandbox With Dale Dougherty

Turn Your Kids’ Drawings into Plush Dolls with Budsies

1 thought on “Curse You, Duff Goldman!”