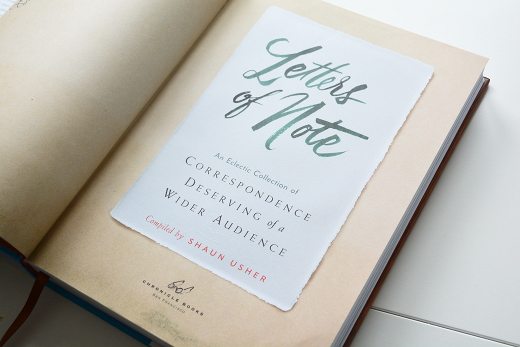 Based on the popular website by the same name, Letters of Note‘s subtitle is very telling: “An Eclectic Collection of Correspondence Deserving of a Wider Audience.” This book is filled with personal letters and other correspondence from throughout history. Many from famous people, a few from the lesser known, but more than 125 in all, many of which have not appeared on the website, and are here for your perusal.

In a blurb from Stephen Fry on the front of the book, on a sticker no less, he says, “…this stupendous compendium of letters ancient and modern is my book of the year. You will never tire of it.”

He has a good point. You can read and re-read this book and find new tidbits and inspiration each time. And you can use the attached ribbon bookmark to mark your place or mark your favorite letter.

Like on the website, the letters contained in this book are often reproduced as they were originally, and often with a transcription for those that are hard to read. Some are handwritten, some typed, and for some, only the text is included.

Some of these letters are just stunning, some are poignant, some are full of love, and some are quite sad. But all are important. These gathered letters cover the breadth of human experience. From women who felt they needed to give up their babies to Steve Martin’s sense of humor to a postmaster in London during the Great Fire to a letter from Mark Twain to Walt Whitman extolling the important parts of history that Whitman had witnessed in his life… The book contains so much that will provoke great thought and discussion. I’ve excerpted some of my favorites below.

Looking for a good drop scone (pancake) recipe? How about one from Queen Elizabeth II herself, on Buckingham Palace stationery! She shares her promised recipe with President Eisenhower, giving suggestions for alternate ingredients and proportions. (You’ll have to check out the book for the actual recipe.)

Seeing a picture of you in today’s newspaper standing in front of a barbecue grilling quail, reminded me that I had never sent you the recipe of the drop scones which I promised you at Balmoral.”

Children all over the world who dream of becoming scientists will appreciate one 12-year-old boy’s letter to the Royal Australian Air Force’s Rocket Range, written with the intent to help Australia enter the Space Race, and a scientist’s reply, 52 years later. The boy’s original letter was mostly drawings of his rocket ship design. The reply came from Allan Paul, Research Leader of Applied Hypersonics:

“…I have included a picture of our latest flight of a hypersonic vehicle under the HIFiRE Program, so that you may see that many of your designs have merit. The fins are a little smaller, and on our work, we haven’t advanced sufficiently to put people on board, as you clearly indicated we should. Curiously enough, though, people are still toying with the idea of combining rocket engines with turbines as suggested in your letter. These engines are now called Rocket Based Combined Cucle Engines and seem to work about as well as they did back in 1957!”

Francis Crick wrote about his co-findings on the structure of DNA to his son before they were shared with the rest of the world. He describes their findings in great detail, including several diagrams.

Jim Watson and I have probably made a most important discovery. We have built a model for the structure of dex-oxi-ribose-nucleic-acid (read it carefully) called D.N.A. for short. You may remember that the genes of the chromosomes—which carry the hereditary factors—are made up of protein and D.N.A.”

Wil Wheaton fans will be pleased that he didn’t escape inclusion in this fantastic book, with his letter entitled, “Dear 8 Year-Old Teresa,” from 2009. As a girl, Teresa tried and failed to join Wil’s fan club, and Wil made up for it, decades later.

I wanted to apologize to you for making you wait so long to get your official WilPower fanclub membership kit. You see, 15 year-old me is very busy with work and school, and the people who were responsible for getting your membership kit mailed back to you must have made a mistake.”

And one of my favorite letters from the book, the extremely haunting memo that would have been referred to if the Apollo 11 moon landing had gone awry. It contains a speech entitled, “In Event of Moon Disaster,” which would have been given by President Nixon, and the memo also discusses what would need to be done if Neil Armstrong and Buzz Aldrin had become stranded on the moon.

“IN EVENT OF MOON DISASTER:

Fate has ordained that the men who went to the moon to explore in peace will stay on the moon to rest in peace.

For anyone who enjoys a personal side to history, Letters of Note is a wonderful, stunning book. Because each letter is its own bit of history, this book can be picked up and put down at your leisure, reading only a letter at a time if you wish, so you can reflect upon its meaning. A perfect option for a graduation present, or even Mother’s Day or Father’s Day, Letters of Note is brimming with history, and gives perspective to us in the modern day.

Letters of Note hits bookstores in the United States on May 6.

Note: I received a book for review purposes. 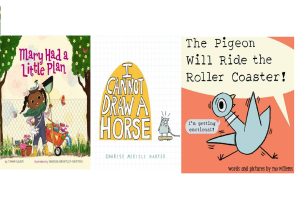