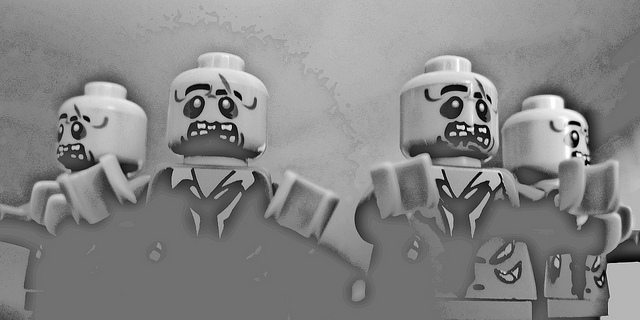 I was at a party this weekend, which used to mean one thing and now means something else entirely. While my 7-year-old boy stared blissfully into the light breeze having his face painted by a classmate and his 5-year-old sister tried to catch his terrified friends and kill them with a badminton racket, I found myself chatting with a circle of dads. Of course, the topic turned to the zombie apocalypse.

Greg was sure a quick death for all was the best possible end. He should know: his popular self-published book on how to retrofit a Sprinter van as an RV puts him in contact with a population of steampunk tinkerers who have looked the awful possibility of the apocalypse in the eye.

Scott recommended all or nothing – you and the kids both live or both die – citing the idea that if the kids survive, you’d want to be around to take care of them. But then again, Scott tends sponges for a living. Okay, he’s a Berkeley-trained PhD cellular biologist, but can you really trust the reasoning of a man who grows sponges?

Chris is a toymaker. He gave my offspring blowguns for their two-years-but-one-day-apart birthdays. He said that he would choose to live after the apocalypse but wished a quick end for his kids. His reasoning is that the post-apocalypse world would suck, but that as an adult he was equipped to handle it emotionally and physically in a way that would destroy the souls of children. Then again, he gave my kids blowguns, for frick’s sake. And now my dogs are nervous.

My knee-jerk answer was for the kids to survive but for me to sacrifice my own tragically limited grey matter by taking a dive off the highest, nearest cliff to Boulder, CO as soon as the zombie horde passed critical mass. It was knee-jerk because: can you imagine wishing for the death of your kids in any circumstance? But on second thought, maybe leaving them the responsibility of continuing the human race amid certain awfulness is selfish?

Can we please come to a reasoned conclusion on this important issue? I imagine there are existential, metaphysical, technical, and moral implications beyond my grasp.

Muppets in Resident Evil 5 – So Very Wrong, Yet So Very Right

7 thoughts on “An Essential Question About Kids, Survival, and the Zombie Apocalypse”