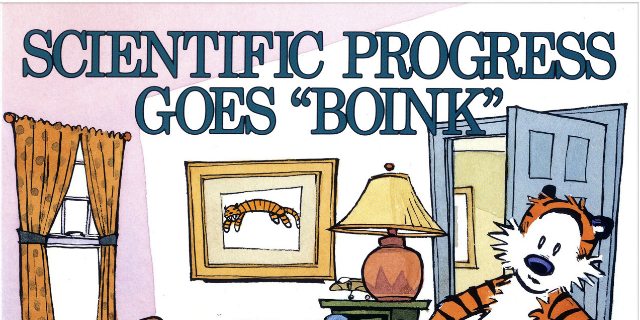 Gary Larson tapped into the universal absurd. Charles Schulz helped us identify with the underdog in us all. And Bill Watterson accurately represented a father’s profound and boundless knowledge of the universe, as in Calvin’s dad’s explanation that ice floats because “It’s cold. Ice wants to get warm, so it goes to the top of liquids in order to be nearer the sun.” Or his explanation of relativity: “It’s because you keep changing time zones. See, if you fly to California you gain three hours on a five-hour flight, right?”

Again, and in the words of another cartoon sage, “It’s funny because it’s true.” How true? Well, THIS shows that preschool-aged children blindly accept adults’ explanations of things without considering how the claims match real-world evidence. So Calvin’s dad is scientifically copacetic: as we see in the comic, six-year-old Calvin is just starting to tentatively doubt his dad’s explanations that, for example, a bridge’s weight limit is determined by “Driving bigger and bigger trucks over the bridge until it breaks. Then they weigh the last truck and rebuild the bridge.”

So will kids younger than Calvin believe anything we tell them? When we wag our parental mouthparts in a preschooler’s general direction, does the content matter? A study on early view at the journal Child Development says yes, and the implications for how kids use parents as guides through the purgatory of questionable information goes far beyond cartoons.

Compare the following answers to the question “why does it rain?” used in the study:

2. Sometimes it rains because there are clouds in the sky that are filled with water. When there is too much water in the clouds, it falls to the ground and gets us all wet.

The first is “circular” – notice that it doesn’t really answer the question. In the experiment, the first answer was attributed to a picture of a fictional female “explainer” in a black shirt and the second answer was attributed to a female explainer in a green shirt. Then the kids were given a picture of some new, ambiguous object. The experimenter pointed out something about the object, for example saying, “I wonder why it has a round thing there?”

Which explainer did kids believe? You’re probably ahead of the punch line: both three-year-old and five-year-old kids preferred the “round thing” explanation delivered by the explainer who had come correct with a linear explanation for the “why does it rain” question. They went back to the person who they knew delivered the best information.

Here’s an interesting part: five-year-olds knew in their conscious minds which explainer was better – when asked which was best, they pointed at the non-circular explainer; three-year-olds couldn’t point at the better explainer, but their unconscious preference for the better explainer showed that something functioning below the surface of their developing, Dora-obsessed minds knew the difference.

The authors from Boston University write, “Taken together, preschoolers are surprisingly selective, not only in using single words but also in using entire utterances to judge an informant’s credibility.”

Here’s the funny thing: according to this study, Calvin’s dad was spot on. Though his explanations may have slightly stretched what we adults narrowly think of as scientific credibility, they are linear, logical and – at least to the brain of a young child who hasn’t yet pruned branches from the tree of possibilities – perfectly plausible. That’s why Calvin goes back for more: the quality (if not content) of his dad’s explanations allow dad to continue as Calvin’s oracle of information.

Make sure your explanations answer the question instead of parading around the topic and you can do the same.

Should You Confront or Let Go of Unfairness?

The Causes of Math Anxiety… And What to Do About It 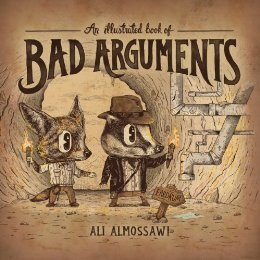 Teach Your Kids Logic With An Illustrated Book of Bad Arguments