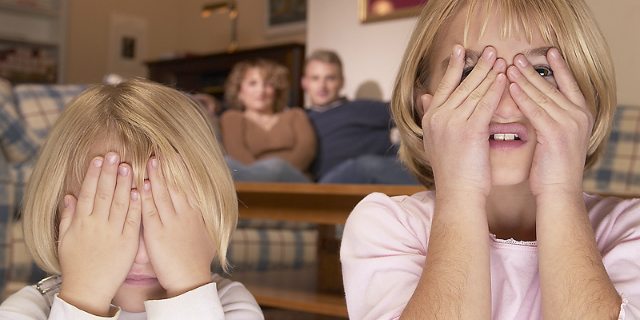 Imagine your child on a school playground. Things don’t go as planned: your child is excluded from a game. How would you like your child to respond? By insisting to be included, or shrugging and finding a different game, or hanging onto the fringe? What you likely don’t want is your child to slink away quietly feeling slighted. A study just published in the journal Infant and Child Development discovered shy babies and looked inside their brains as 7-year-olds to discover the difference between these responses to social challenge; it turns out that the overall amount of “cognitive conflict” a shy child feels when things don’t line up cleanly can predict whether they sink or swim in challenging social situations.

Let’s start at the very beginning, which is a very good place to start.

First, researchers including Ayelet Lahat and Nathan Fox measured something called “Behavioral Inhibition” in infants at 24 and 36 months old. Basically, after asking moms about their children’s temperaments, researchers presented babies with new stimuli and watched what they did. Some eagerly engaged, while others did so only cautiously or even pulled away. For now, think of behavioral inhibition as a shorthand for shyness: some babies were shy and others weren’t.

Then the researchers waited until kids turned seven and did another round of tests. This time, kids started with something called the Flanker Task: a target shape is surrounded by a bunch of distracting shapes and so the Flanker Task requires inhibiting the distractions while focusing on the target. The difficulty of keeping some things in mind and others out is “cognitive conflict,” and researchers saw each subject’s amount of cognitive conflict as the electrical activity produced by a specific part of their brains during the Flanker Task. Really: they slapped a hairnet of electrodes on 7-year-old’s and some brains were more affronted than others by distraction and disorder.

So far we have shy babies with varying degrees of cognitive conflict, and there was one final piece: social exclusion. In a (somewhat sadistic?) game called the Ball Task, a child is paired with a same-age, same-gender “friend” and then they play catch with a researcher. Only, for 60 seconds the researcher throws the ball just to the friend and not to the subject – for a minute, one child is excluded.

How does this excluded child react? Well, in the case of this study’s 81 seven-year-olds, the responses were divided as follows: “Aggressive (.60%; dropped due to the low frequency); directly assertive (12.6%; child stood up for him/herself); indirectly assertive (31%; child stayed involved in the situation but did not directly stand up for him/herself); passive-redirect (13.2%; child directed attention elsewhere); or passive-withdrawal (42.5%; child withdrew from the situation).”

In this situation, many parents would want their child to say something like, “Hey, throw the ball to me too!” And we can see that 12.6% of children did – they were “directly assertive.” But far more drifted away from the game.

The researchers write that, “Children with [high conflict monitoring] who are also highly behaviorally inhibited may not flexibly engage their control processes, resulting in rigid, inflexible, and over-controlled behaviors. This over control may result in increased withdrawal during challenging social situations.”

Reams of research show that it’s not easy to be a shy child. This new study adds a layer: it is especially difficult to be a shy, anxious child.