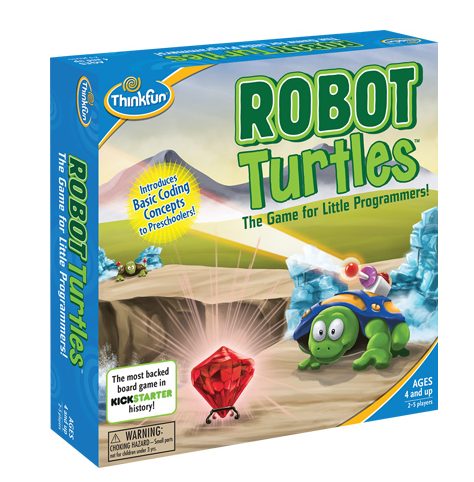 Robot Turtles is back!

With an unbelievable run on Kickstarter as the highest funded board game in the site’s history—and over 20,000 games shipped to backers—it only makes sense that Robot Turtles would find its way to a mass market. ThinkFun is now taking pre-orders on the preschooler board game, which is planned for release this June.

Robot Turtles creator Dan Shapiro talked a little about the release of the game in a note to the game’s original backers:

This summer, [ThinkFun owner Bill Ritchie] will be putting Dot, Beep, Pangle, and Pi on store shelves, with all the gameplay of the original plus some cool enhancements. I’ve seen previews of the graphics and they’re seriously snazzy-the same turtles, but with brighter backgrounds and shinier colors (including gold foil!). The box will hold the pieces better; no dump-and-sort. The rulebook will not fall apart when you open it. And content of the rulebook will be completely redone, making it waaaay easier to get started.

The game now retails at $24.99. Pre-order bonuses include a free Special Edition Expansion Pack that doubles game play and features new challenges, game tokens, and accessories. Once Robot Turtles is released in June, you’ll be able to find it at Target.com and neighborhood toy stores across the country.

So if you missed your chance to get in the original Kickstarter, this is your opportunity to get your young learners on the path to programming!

The Desktop Gremlins Book Is Out!

1 thought on “The Return of Robot Turtles”