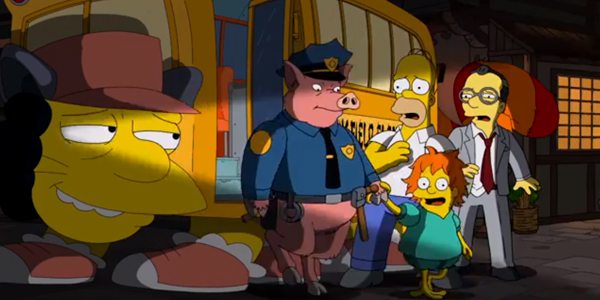 Two animated universes will collide on the small screen this Sunday, January 12, in a new episode of The Simpsons. Fox has released a sneak peek of a scene that honors the films of anime master Hayao Miyazaki. The Studio Ghibli founder recently announced his retirement from filmmaking; his upcoming release The Wind Rises will be his last, he says. See how many references you can spot in the clip above.

For those playing at home, there were nods to Spirited Away, My Neighbor Totoro, Ponyo, Kiki’s Delivery Service, Princess Mononoke, and Howl’s Moving Castle (and possibly even more we didn’t catch).

The episode, which is titled “Married to the Blob,” features a romance between Comic Book Guy and a manga creator named Kumiko. As if we didn’t already have enough reason to watch, it also boasts guest stars Harlan Ellison and Stan Lee as themselves.

All Aboard the Dinosaur Train!