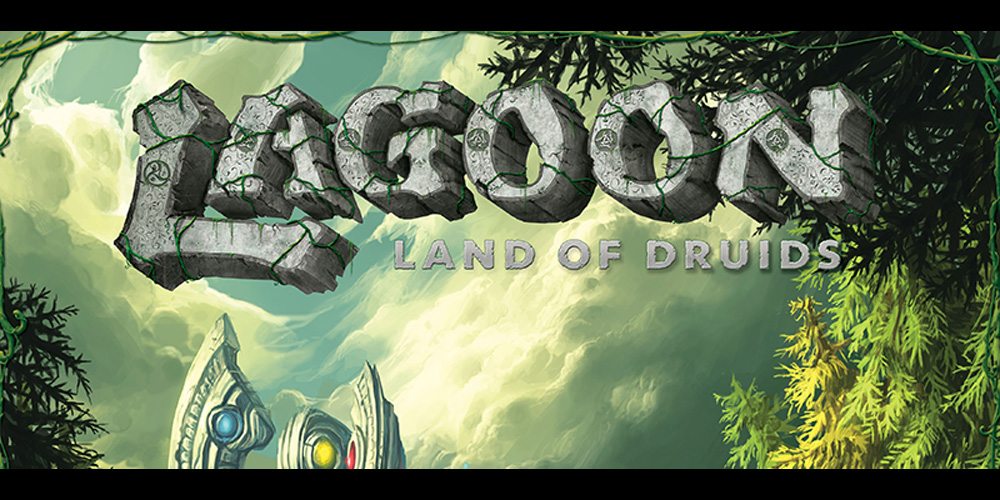 In the board game Lagoon: Land of Druids, you control druids who are shaping the world—exploring new sites as well as unraveling sites. At the end, one of the three competing energies will be dominant, and the player who supported that energy best will win. The Kickstarter campaign for Lagoon just launched today.

At a glance: Lagoon is for 2 to 4 players and takes about an hour to play. I haven’t seen any recommended ages yet, but I would suggest it for more experienced players because it does require a good amount of planning and strategy. The pledge level for the game is $35.

The copy I played was an unfinished prototype, so the final list is subject to change, but here’s what you should be getting:

The tiles pictured here don’t have artwork on them, but I’ve seen some samples of the artwork (some of which you’ll see here) and it looks pretty nice. (See the Kickstarter page for more.) There are three different “energies” in the game, represented by the red (Vowelon), blue (Deonin), and yellow (Elemeen) icons. Each hex tile has two different colors on it, one on each side, so you get a choice when you place it, and some are marked as havens. The druid tokens are double-sided: one side is “refreshed” and the other is “exhausted,” indicating whether that particular druid can take an action.

There is a free print and play version available now (though be prepared to cut out lots of hexes), and you can also download a draft of the rulebook here. I’ll give a quick overview of how the game works.

The board starts with three hexes (one of each color) one of which is a haven, and each player starts with two druids—an Acolyte and the Eldrid—on the haven.

On your turn, you get to refresh up to 3 druids, and then invoke various actions with them by exhausting them (flipping them over). The three basic actions are: Move (move to an adjacent hex), Summon (bring in another druid from your supply), and Explore (draw a tile from the bag and add it to the board). When you Explore, you also take a Seed token matching the tile’s color—this is important, but for some reason is the hardest thing in this game to remember.

There are also Site Actions. This is a little trickier to grasp at first, but any of your refreshed druids can perform a tile’s action as long as you have at least one druid, refreshed or exhausted, on that tile. There are some more powerful actions that can only be taken by your Eldrid, but your Eldrid doesn’t have to be the one on that particular tile—it just has to be the one that you exhaust to perform that action. Elemeen sites tend to be about energy and refreshing druids, Vowelon is about movement, and Deonin lets you manipulate tiles.

Finally, you can Unravel. The three energies have a sort of rock-paper-scissors relationship: Elemeen beats Vowelon, Vowelon beats Deonin, and Deonin beats Elemeen. If you occupy three separate tiles of a dominant energy and you have a refreshed druid on a site with the weaker energy, then you can invoke that druid to remove that tile from the board. You can also spend seeds of the dominant energy if you don’t occupy enough locations. The sites that you unravel are kept in front of you, because they could be worth points at the end of the game.

The game ends when the last tile has been placed onto the board. At that point you look to see which energy has the most sites on the board—that energy is Lagoon’s “destiny.” In the case of a two-way tie, the dominant energy wins; in the rare event of a three-way tie, the energy with the most total seeds in all players’ supplies becomes the destiny. You get 1 point for each seed you have that matches the destiny, and 2 points for each unraveled site of the other colors. If there’s a tie for points, then the unraveled sites of the winning energy come into play—think of it as bad karma—because if you worked against the destiny then that may cost you.

First, a disclosure: David Chott, the designer and publisher of Lagoon, is here in Portland and we’d interacted on Twitter, but I hadn’t actually met him in person until Gen Con last summer. Afterward, he joined my gaming group and we enjoyed his company as Seoni in our Pathfinder ACG adventures until he had to buckle down and work on launching Lagoon. So I suppose I have a vested interest—if he’s too busy managing production and shipping, then it means I won’t be seeing him at game nights anymore, so just pretend you didn’t see any of this. Actually, I’ve found David to be a very thoughtful and sincere guy, and I’ve enjoyed following the progress on Lagoon and am excited that it’s finally ready to launch. David provided a prototype copy of the game for me to try out.

The mechanics of Lagoon aren’t too complex: you spend your druids to perform particular actions, add new tiles to the board, which then gives you more available actions. The only tricky parts are the way that the site actions and unraveling work, because any of your druids can invoke a site action that any of your druids occupy—but to unravel you must invoke the druid that’s actually on the site to be unraveled.

The one other tiny-but-crucial rule that I keep forgetting is to take a seed token every time I explore. I think in the excitement of reading the two sides of the tile and deciding which energy to support and which ability I want to use, it’s easy to forget. But since those seeds may be worth points or can be used to unravel sites (or invoke certain abilities), it’s important not to leave out that step while exploring. David has informed me that he’s adding a player marker token that will serve both to indicate player color (since sometimes all your druids are on the board) and to mark when you’ve explored, since that can only be done once per turn—at which point you’ll see the reminder to take a seed.

While the mechanics themselves may seem pretty straightforward, the strategy can be a brain-burner. Lagoon is not a game where it’s always obvious who’s ahead, because the values of seeds and unraveled tiles depends on the final state of the board. You may have collected a whole lot of red seeds, but if yellow or blue become dominant, those seeds are completely worthless. A key part of the strategy is deciding which energy to support and how soon to commit to it: too early, and your opponents may be able to thwart you by supporting the energy that is dominant to yours, helping them unravel the sites you’re exploring. Too late, and you won’t have enough points built up no matter which energy becomes the destiny.

Since unraveled sites can be worth two points and seeds are only worth one, there’s also a balancing act in deciding when it’s worth using seeds to help you unravel a site. And there’s also nothing that says you can’t support the same energy as your opponent, in which case it’s a race to explore sites of that color and unravel the other two.

Probably one of the reasons I enjoy the game so much is that it requires a lot of logistical planning. Druids can move around, but usually only one hex—and then they’re exhausted. But exhausted druids still provide access to that site’s ability, which another druid elsewhere can use. Trying to manipulate those abilities so that you can get all your druids in place for an unraveling is the sort of problem that I love puzzling out. It’s extremely satisfying to set up a chain that moves a couple druids around, refreshes just the right druid, and then take out that crucial location before your opponents have a chance to use it.

There is some chance involved in the drawing of the tiles—if you’re counting on one specific color, you have a 2/3 chance of getting the one you want, but there’s no guarantee. And because each location has a unique ability associated with it, there’s a very small chance you’ll get the specific ability you want. However, that tile draw is really the only element of chance in the game—everything else is based on what you do and what your opponents do.

I did worry after my first couple plays that perhaps it would be too difficult to counter an opponent who picked an energy to support early on. I’ve played around with some different strategies since then and there are ways to balance things out, but it does take some experience with the game before you pick up on that. Because of the low luck factor, this is the sort of game in which experienced players will usually have an advantage over new players until everyone gets more familiar with the site abilities and the way the druids work.

The game was fun to play in its prototype form, but having seen some of the final artwork for the game, I’m really excited to see the game in its finished form. I think the fantastical images will help bring out the theme of the game and make it a little less abstract.

Overall, I really enjoy Lagoon. It requires a lot of planning and thinking ahead, both about your own moves and what your opponents may do. The way that scoring is dependent on the final outcome of the board is a little different—the tiles and seeds you hold may or may not be worth points, so you’re competing both to drive the destiny of the world and to collect the most points if that destiny succeeds. My only caveat is that Lagoon isn’t for everyone—it’s a little too complex for my kids so far, and not one I would recommend for those who prefer casual games. If you like deep strategy, though, Lagoon is a new world worth exploring.

For more information, visit the Lagoon Kickstarter page, or check out David’s blog at 3 Hares Games in which he talks about the process of designing and Kickstarting his game. 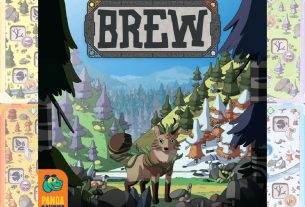 Mixing Up a Potent ‘Brew’