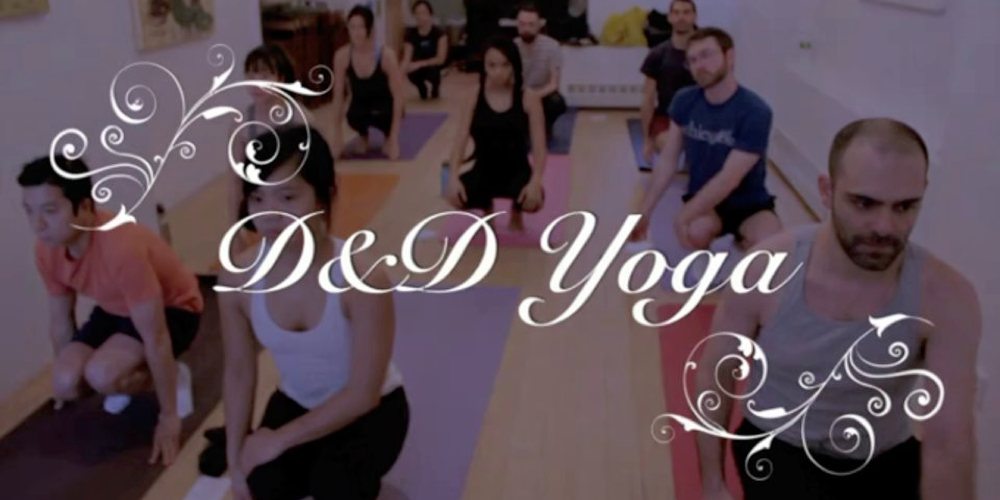 On Saturday, January 25, at a small art space in Brooklyn, a group of stalwart adventurers embarked upon a most unusual undertaking—the world premiere of D&D Yoga.

Before the adventure began, each member of this brave group of yoga practitioners (I have it on good authority they like to be referred to as yogis) was presented with a character sheet and a 10-sided die. Once the session began, they all played as the same character with the same brief backstory: “a roguish rugged individual who has run afoul of the local law. You are given the opportunity to be absolved of your crimes. Your task at hand is to take this package to the ancient temple in the nearby forest and leave it in its proper place.”

As Brooklyn-based interactive artist Eric Hagan (the dungeon master) led the group of downward-facing rogues through a session that was as much guided meditation as it was role-playing adventure, the yogis followed the movements of a yoga master in performing a series of poses created specially for D&D Yoga by choreographer Sarah Dahnke. Naturally, these poses are branded with genre-appropriate names such as Sword One, Sword Two, Opening Door, and even Dice Rolling Pose. One hopes the adventure doesn’t end with Corpse Pose.

D&D Yoga was dreamed up by artist Scott Wayne Indiana, who came upon the idea of combining the storytelling narrative of a D&D adventure with yoga after spending a weekend in an ahsram and participating in both guided meditation and yoga sessions.

Indiana’s invention is not even a week old and already there’s been plenty of interest in trying it out; there’s even been talk of holding a session during SXSW. In fact, on the Vimeo page showcasing the first session, one of the people organizing the event has expressed willingness to “help facilitate D&D Yoga in other locations,” so there’s a chance it may be coming to your community soon.

Rise of the Machined

2 thoughts on “Ashram of Horrors! D&D Yoga Has Arrived”