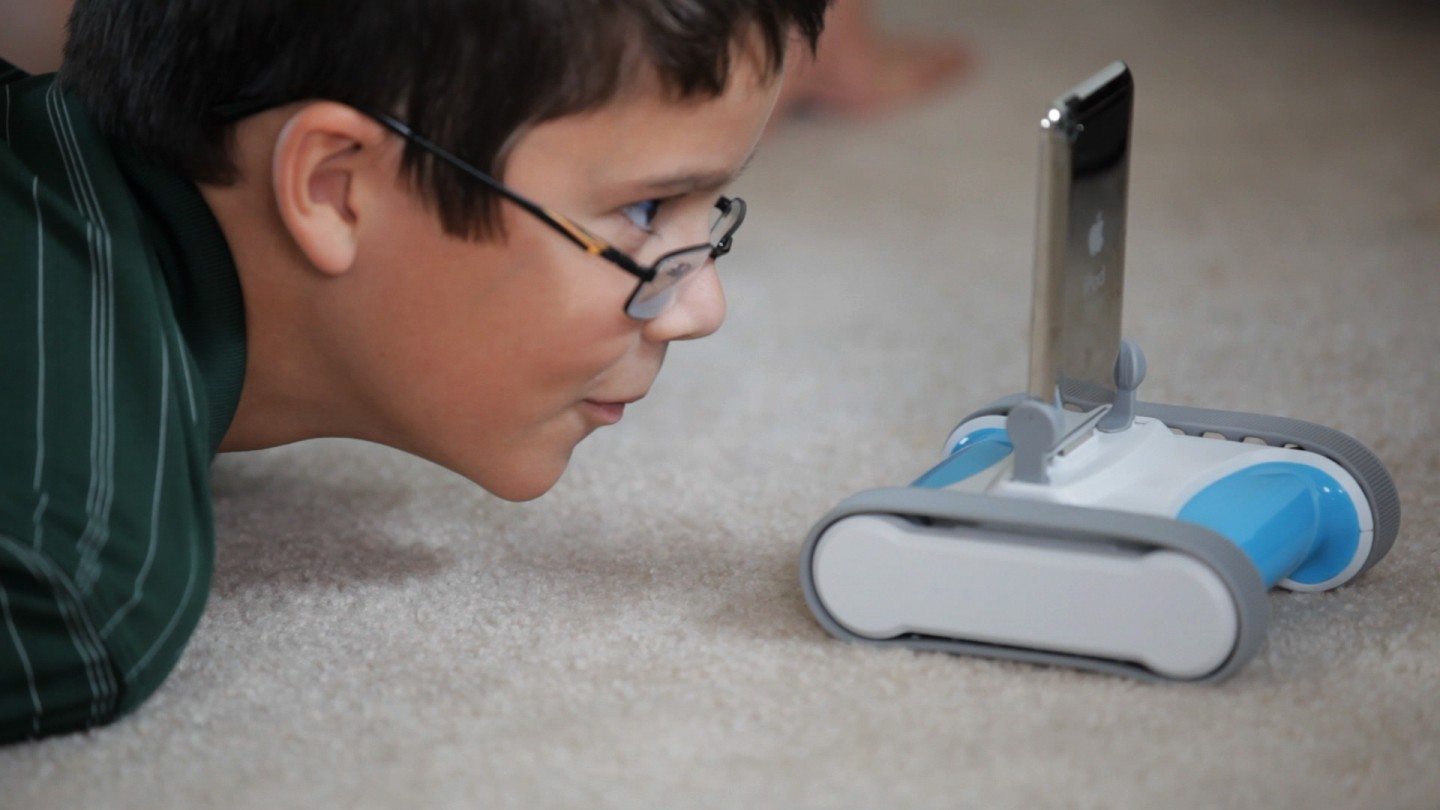 What kid doesn’t like an R/C toy? Who wouldn’t want a programmable robot, one that learns to react to your face, recognizes colors and has its own highly animated facial expressions? What about your own mobile remote presence, complete with motion control and two-way audio and video feeds? Using your iPhone or iPod Touch as its brains, the Romo app-controlled robotic pet for iOS devices manages to pull off all these capabilities. It does so in a way that’s both entertaining and educational for kids and the icing on the cake is there are no additional batteries required (anyone who’s had to load up an R/C car then its controller with handfuls of AAs and 9 volts knows what I’m talking about) — the Romo base recharges via USB while your iOS device recharges using your normal method.

Setting up the Romo for the first time is very simple. Charge the base unit battery by plugging into a spare USB port (cable is included) and while you’re doing that, download the free Romo app and Romo Control app from iTunes. The base glows blue with a light that flashes as it’s charging, solid when it’s at capacity (a full cycle seems to take around five or six hours when plugged into my laptop). The base itself is motorized with a pair of caterpillar tracks that prove stable and sure-footed on hard terrain and carpet. It’s surprisingly zippy and also got far less gummed up by dog hair than I was expecting. Battery life was at least two hours on a relatively smooth surface.

Plug the iPhone or iPod Touch* into the Romo base, launch the Romo app and you’re greeted with a cut scene showing Romo’s arrival on Earth and the introductory phase where you name it, it examines you (pretty cool as the dock moves to let the camera pan up and down to scan you) and then it’s time to start training. *The Romotive website lists all compatible devices.

One suggestion, because Romo moves around a lot as it initially interacts with you, (including some sudden movements): run the setup on a table, away from the edge, or on the floor.

As you train Romo, abilities are unlocked. And the training process is basically visual programming in disguise. As kids work their way through each objective, they’re assembling more complex programs until they’re at the point where the robot is following a race course and then using its sensors to chase a ball. Very cool. All the while, Romo reacts to its environment, even blinking an eye every time someone pokes it. My kids found its interactivity (the facial expressions combined with vocalization and movement) to be tough to resist.

In R/C mode (well, Wi-Fi really, since it uses The Romo Control app on another iOS device or via Chrome or Firefox web browser), the driver takes full control of Romo and can zip it around, turn, reverse, tilt the docked iPhone up and down and manually change the facial expression on Romo. They can also snap a photo using the docked device’s camera. On our Wi-Fi network, there was no lag at all.

The telepresence option adds even more fun. You need at least an iPhone 4S docked in Romo to pull this off, but once you do, the robot is transformed into a mobile telepresence. The controller (who ‘calls’ the Romo with a unique Romo number to request control) has full command of the robot as in the R/C mode. But, instead of Romo’s face, the controller’s face is displayed on the iPhone, and they have use of its camera, microphone and speaker, so it’s possible to zip around the house and participate in conversations with people — while located virtually anywhere in the world.

The Romo downsides? No Android support (or Windows Phone for that matter) — although the device can be remotely controlled by any computer or device able to run Chrome or Firefox browsers. Also, the need to dock the iOS device means having to choose a Romo specifically for your generation iPhone. Because that dock connector can’t be swapped out, upgrading your iPhone could lead to an orphaned Romo. Finally, your iOS device is in that cradle, so if you take control and drive it full speed off the top of the stairs, it’s not just an R/C toy that’s going to take a tumble, it’s your iPhone or iPod going down too.

I already liked Romo enough to include it as my entry in our yearly Toys Edition Holiday Gift Guide and having the extra time to really put it through its paces cemented that initial reaction. The $149.99 price (for 30-pin dock version or Lightning dock version — make sure you order the right one) may be a little steep compared to other robotic toys and you do still need a compatible iOS device to complete the package, but considering the ground it covers, the built-in rechargeable battery and the build quality of the Romo base, I think it’s well worth it.

Learn How to Read a Word