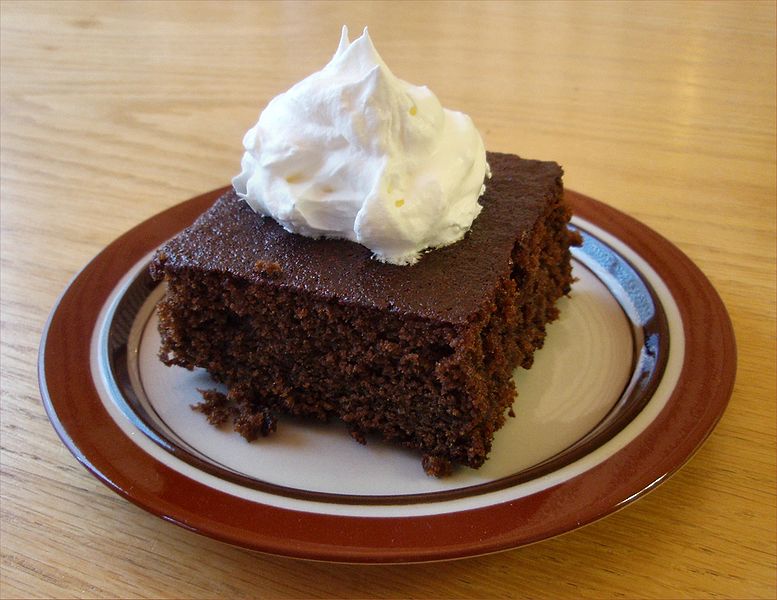 Geeks are no strangers to holiday traditions. Perhaps we even obsess over them a bit more than the average person. So when the holiday season comes upon us, we flock to the stores and buy—among other things—lots and lots of holiday-themed goodies, and ingredients to make homemade goodnesses. I have some must-haves for my house. I think we all do. There are many holiday food traditions all over the world (Wikipedia has even gathered some of the most popular), but here are some goodies that just say “Christmas” to me.

Egg Nog. Once Halloween is over, we scour the grocery store, waiting for the Arrival of the Egg Nog. We especially like the pumpkin flavor, but the vanilla spice ones are great, too. We usually drink them sans alcohol, because we share with the kids. This year we had to cut ourselves off after a couple of quarts because we knew more goodies were soon to come.

Spiced Cider. When I was little, I lived in Wisconsin. You may not think it’s a hotbed for apples, but I associate fall in Wisconsin with—along with jumping in piles of leaves—apples. We used to go apple picking every year, and apple cider and spiced cider bring me back to those days. Great by itself, or mixed with other things (such as a strong ginger brew, and maybe a splash of bourbon), you’re basically drinking a serving of fruit. Win win.

Pfeffernüsse. This spiced cookie was a staple every Christmas when I was a kid. We usually bought the Archway version, but this year I mixed it up a bit and got the Trader Joe’s version. These cookies are covered in powdered sugar, and are small but pretty dense, so it doesn’t take many to satisfy. Great with tea or cocoa.

Gingerbread. I don’t know why I don’t make gingerbread-themed things more often throughout the year. It’s probably one of my favorite, non-chocolate desserts out there. I don’t like the crunchy cookies or stale houses, though. Either a thick, soft cookie, or, even better, the cake-type-version of gingerbread is my version of ambrosia. The cookies have the advantage of being great to decorate with icing, and the cake version makes a great regular dessert option.

Pumpkin Bread. My favorite recipe is actually from my ex-mother-in-law. It makes a moist, tasty, fattening loaf of goodness. This year, though, rather than make a batch of three loaves all for my family, I’m making it for a couple of potluck parties we’re going to. This way I can enjoy a little, and share the rest. Bonus: It freezes and travels well.

Cranberry Bread. Cranberries come out in droves around the holidays. I often buy a bag and make cranberry bread. Mixed with orange zest, orange juice, lots of sugar, and other ingredients, it’s an interesting addition to the traditional fare.

Fruitcake. Yes, fruitcake. Where I come from (otherwise known as my mom’s kitchen), fruitcake is a tasty, moist, fruity, flavorful quick bread. It has lots of dried fruit, very little candied fruit, and cardamom. She used to make almost a dozen loaves every year, sending them to family members who actually wanted to receive them. She’d bake them weeks in advance, and then they’d soak in brandy, rum, or other spirits until Christmastime.

Other Types of Goodies

Fudge. Several years ago, we experimented and perfected a fudge recipe to cook at high altitude. (Water boils at a lower temperature up here, which greatly affects the candy-making process.) So I have one recipe for dark chocolate mint fudge which is exceptional, I believe (here is the sea level version). As a kid, though, my grandmother always sent us a small foil pan of her homemade fudge, so it’s always been a holiday tradition. And it doesn’t take much for you to feel like you’ve had some dessert.

Kringles. This was more a tradition when I was a kid in Wisconsin, but they are so… good… If you’re not near Wisconsin, you can get them mail order from a couple of different places. They aren’t cheap, but they are very good and come in a wide variety of flavors. Think fruit filled pastry, but flat and in a ring. With icing.

Buckeyes. I haven’t made these myself, but they are amazing. You mix peanut butter with powdered sugar and Rice Krispies, roll into balls, and then cover with chocolate.

Pumpkin Pie. Though this traditional pie is more often a Thanksgiving event in our family, it often keeps making appearances through Christmas.

Panettone. This is a new one for me. This year was the first time I’ve ever tried it. My assessment? It’s tasty! Would eat again! Maybe with some kind of hard sauce.

Peppermint Bark. There’s nothing quite like peppermint bark. Chocolate, peppermint, oftentimes some white chocolate… The buckets at Costco call to you. But it’s so easy to make it yourself. Just melt some chocolate chips and pour on a large cookie sheet. Cool. Melt some white chocolate chips and pour on. Push in crushed candy canes. Cool. Cut or break up. Voila. I often add Rice Krispies to the layers, too, to make them easier to eat.

Candy Canes. Candy canes are everywhere. I rarely eat them anymore, but they’re good ingredients (see above), fun to hang on your tree, and handy treats for kids.

Russian Tea Cakes (AKA Mexican Wedding Cakes AKA Snowballs). These white, nutty cookies seem to be more available around the holidays, and they are a staple at cookie exchanges. I include them here because I like to eat one or two once in a while.

Christmas Pudding. Not a milk-based pudding like we have in the States (though that is heaven in a bowl), but the spongey, steamed or boiled kind of pudding you find in England. Never had one. Always wanted to. Perhaps on a future trip to England?

Yule Log. Chocolate, chocolate, and more chocolate, all shaped like a fallen log in the forest? Can’t go wrong with this one. I’m also not sure how I’ve never had it before.

What holiday goodies do you make sure to purchase or make yourself? Which ones are new for you this year?