For today’s Word Nerd, we’ll look at two words that fit nicely together, if you happen to be a pirate or Visigoth; hoard and horde. Just for the heck of it, we’ll throw in hoared, but I think we’ll skip whored, if it’s all the same to you. 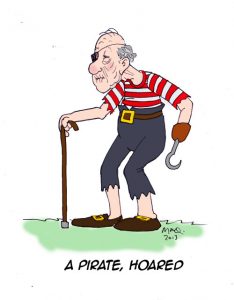 Hoard is an old word, dating back to before 900; the Old English hord derives from the Old Norse hodd, from the Old High German hort, which comes from the Gothic huzd. All of them mean hidden, with the implication of hidden treasure.

Horde is a few hundred years younger; it shows up in English around 1550; it comes from a Czech/Polish word, horda, which comes from the Old Russian orda (by way of Ukrainian dialect orda), either from the Mongolian or Turkish ordu, which refers to a royal residence or camp. It eventually came to refer to any military encampment or army.

Hoared is another old (circa 900) word with its roots in the German and Norse languages. It comes from hoar, which comes from the Middle English hor, Old English har, Old Saxon, Old High German her, Old Norse harr, all of which mean gray with age. Today hoar refers to frost, referring to the gray-white color, while hoared retains the earlier meaning, with the gray suggesting mold due to age.

If you talk about a pirate hoard, you’re talking about pirate treasure.

If you refer to a pirate horde, you’re talking about a whole bunch of pirates.

Army Vs. Aliens Lets You Dominate the World