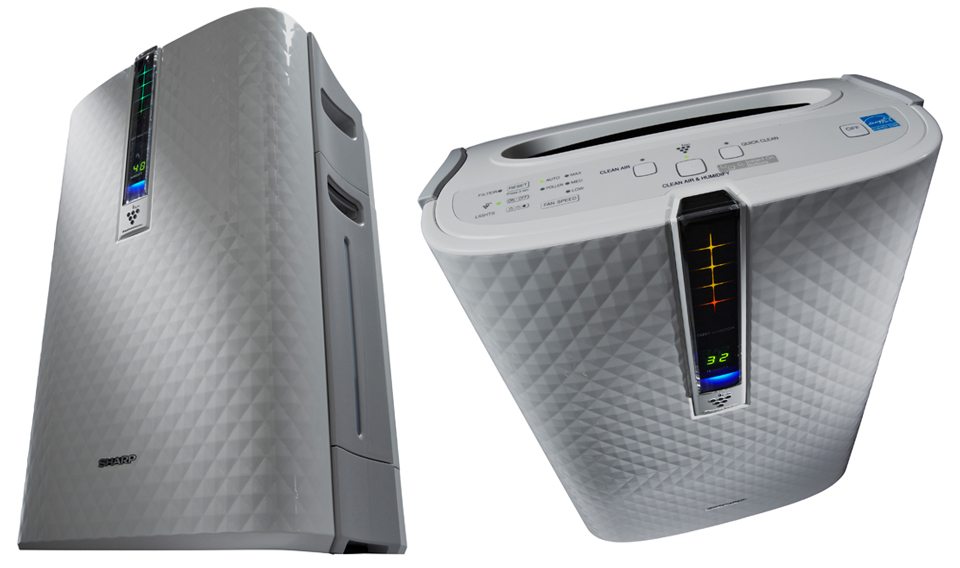 As I’ve gotten older, I’ve become more of a hypochondriac. I’d like to think that I’m not alone. However, this summer, I had a truly frightening few minutes. I found myself pacing and frantically searching the web for stroke symptoms. Soon after, I was reviewing emergency procedures with my 6-year-old, who luckily, couldn’t tell that his mom was in complete panic mode.

You see, the side of my face had gone completely numb and I was struggling to breathe.

An incredibly long 10 minutes or so into this session, I realized that I was having an allergy attack. I’ve had allergy issues before. For the most part, though, this is a new thing. I could rub my face into flowering plants, cats, and other allergens well into my adulthood. However, lately I’m getting sniffles, sneezes, and swelling.

Someone must have been reading my mind (or at least my web browser), because it was shortly after that I received some info about the Sharp Plasmacluster Ion Air Purifier. This isn’t your average air purifier. It doesn’t look like one or perform like one. It also isn’t priced like one.

Sharp makes air purifiers in six different sizes, with prices ranging from $149.99 to $499.99. The model that I got to sample was the KC-850U (MSRP: $399.99), which boasts “True HEPA Filtration.” This is fancy speak for the device’s filter system. Sharp says it can snag 99.97 percent of the particles floating. While I can’t dispute or prove that claim, I know that between my husband, my son, and my dog, we have plenty of particles. It was time to put this thing to work.

Unboxing the Purifier
Don’t let the size scare you. The KC-850 is kind of large. I already have two laundry hampers in my bedroom. This is like adding a third. Also, it has some sci-fi-looking lights on the front, which would be really cool if you wanted to know what it’s like to sleep inside the Enterprise. This area displays the conditions and humidity of the room, which isn’t all that important at 3:00 a.m. It took me about a week to realize that the lights can be dimmed or turned off altogether. Yes, there’s a button right on top that says “lights,” but when my eyes feel like they are about to separate from their sockets, I’m not always that thorough.

Other buttons include one to reset the filter, one for fan speed, and one for power. There’s even something to turn the Plasmacluster portion on and off, although I’m not sure why you’d ever want to go without. (That’s for someone without the magic!) There’s also a trio of buttons for Clean Air, Clear Air & Humidify, and Quick Clean mode if you’re ready to start breathing—like right now. Yes, this unit has a humidifier function. A full water tank should get you about 10 hours of humidifying goodness.

The KC-850 is designed for a room that’s about 254 square feet. If you need something a little more powerful, there’s also the KC-860U. That can do about 341 square feet.

It’s also important to note the unit’s three-stage filtration. This includes the aforementioned HEPA filter, which needs to be changed every two to five years, depending on the use. The other two layers include the washable micro-mesh pre-filter and the deodorizing charcoal filter, which is also washable, but should be changed around the same time you do the HEPA filter.

Does It Work?
The hook on the KC-850 is not its size or slick looks, but that Plasmacluster technology. This makes the unit even more Star Trek-like. One could also argue that it sounds like marketing mumbo-jumbo. The concept behind Plasmacluster technology is that it cleans the air by releasing negative and positive ions into the air.

That said, it works. After just a few minutes, my husband ran into the room to declare that it “smelled clean.” (No thanks to him!)

According to a Sharp spokesperson, you’ll get the best results in a closed room. That means the room should have no open doors or windows, with no AC running. Of course, that’s not always possible, especially in those sweaty, high-allergen months. If you must have the AC running, put the purifier closer to where you are sitting or hanging out. If it’s by an open door or window, it’s basically cleaning the air that’s coming from the outside. At the very least, you should place it in the opposite corner for the best results.

I did notice that the unit worked a lot better when I left it running for a few minutes in a closed room. There were nights where I left the door open or had the AC running, but the KC-850 was also right next to my bed.

During my time with the unit, we had quite a few high-pollen-count days—and those were days that I spent holed up in my bedroom. It’s not a perfect existence, but it’s one where I breathed a lot better. The room smelled better, too. Even after cooking fish, there was a noticeable improvement. Also, I didn’t have that freshly botoxed feeling that I had experienced oh-so-many days before. Of course, most people can’t lock themselves away from the world every time an allergy attack arises. However, the KC-850 was helpful at night, allowing me to breathe my way into a nice, relaxing sleep. I also had a lot fewer wake-up calls that involved a runny nose.

My one gripe about the KC-850 is that it doesn’t have a remote, which would seem sensible, given its price, size, and many functions. Yes, it’s pricey. It also delivers, as advertised. If you have the occasional sneezing fit, the KC-850 probably isn’t for you. For some, breathing comfortably makes Sharp’s unit a very worthwhile investment.