This past week’s puzzle:

To play each hand, players look at the hand they were dealt and try to properly guess how many of the “tricks” they can win that hand. Each player declares their bid simultaneously in a manner similar to “paper-scissors-rock” and all bids are recorded. The hand is played according to typical Pitch rules (you have to follow the suit initially lead, the trump suit beats all others, etc.), and when the hand is complete, each player counts the number of tricks they won. If that number matches their declared bid, they win 10 points on the scoresheet for making their bid, plus the number they bid. On the score sheet, you simply place a “1” in front of their recorded bid, so a bid of 4 goes to 14 points, 2 to 12 points, and a bid of 0 goes to 10 points. If they get additional or fewer tricks than hoped, they not only don’t win the 10 points, but their bid as previously recorded gets circled out, giving that player a “black eye” (and zero points) for the hand.

This week’s puzzle is to determine the rates or odds of each player winning a game of Black Eye, given their particular playing styles as defined below. Additionally, determine the odds that Allison will beat me, beat her Dad Wilf, or beat both of us during a given game.

Here’s each player’s strategy, based upon the review of several past game’s scoresheets:

Wilf: Wilf is a bit of a sandbagger. A full 2/3 of the time, he bids “zero” and makes these hands 4/5 of the time. He bids “one” 1/6 of the time (making these 1/2 of the time) and two less than the number of cards dealt the remainder of the time (subject to a floor value of zero, obviously.) In this last set of hands he only succeeds 1/4 of the time.

Judd: I tend to play in a balanced manner. I bid 1 on odd numbered hands and 2 on even numbered hands, adding an additional point on hands with more than 5 cards (again, all subject to the maximum number of cards dealt.) I make these 3/4 of the time.

Allison: Allison plays to have fun. For the first half of the game, she bids either one (even hands) or zero (odd hands) and makes these bids 1/2 of the time. For the second half of the game, she bids either two (odd hands) or three (even hands) and makes these 45% of the time. As with all other players, she can only bid between zero and the actual number of cards dealt in the hand.

As always, please submit your responses to GeekDad Central. A complete entry will list the odds/probabilities of Allison beating me, beating her Dad Wilf, beating both of us, and the odds of each player winning outright.

This week’s puzzle was interesting, in that there were multiple ways to approach it. The most straightforward mathematically, and most accurate, would have been creating the probability trees for each player. For each player, you could determine the odds that they would get a given score on the 1st hand (7 cards), then the 2nd hand (6 cards), etc. For Allison and me, there is only one “mode” or set of points and odds of making the bid for each hand, so our trees would be straightforward – with 13 hands having binary (win/lose) outcomes for each implies 213 or 8,192 different distinct outcomes.

For Wilf and Linda, however, things were a little more “fun.” Each of them had three different modes of play available for a given hand, and each of these modes had a binary (win/lose) outcome. This makes for 6 possible outcomes per hand, and 613 distinct outcomes. As 613 = 213 x 313, this result is some 1,594,323 times larger, so there are over 13 billion distinct outcomes.

For each set of distinct path outcomes, a fixed score and chance of occurrence can be calculated, and a distribution for each player’s score can be plotted. A differential distribution (i.e., Allison – Judd) can the be determined, and the odds for each outcome requested can be canonically calculated.

The much easier way to calculate a reasonable answer for this set of problems is through simulation. Mine was just at 100 lines of code, but I tend to code verbosely (i.e., I have each “if (condition) {statement}” as 4 different lines.) A simple random function can calculate the mode (bid) for each player and whether or not they made their bid is simulated for each hand, and all 13 hands are played for a single game. After adding up the score for each player across all 13 hands in a game, we can see for that randomly generated game who won, if Allison beat Wilf and I, etc. Run for 50,000 to 100,000 games, and you get a great approximation for each distribution or differential distribution — definitely close enough for GeekDad work!

Out of all of the games simulated, the winners shook out as follows:

NOTE: The values above sum to 102.2%, as there were multiple cases where players tied for first place.

Visually, here is how all four distributions looked (bucketed into 10-point intervals): 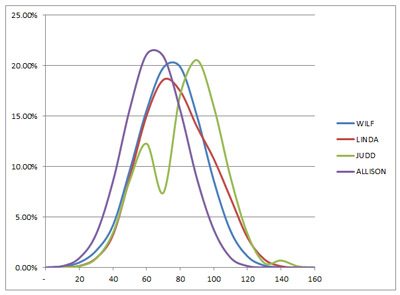 Congratulations to Steven Anderson for submitting a winning entry to this week’s puzzle and being correctly chosen from the set of all correct (or, in this case, reasonably close) entries. For his efforts, he will get a shiny new $50 Gift Certificate from ThinkGeek!

Thanks to everyone that submitted an entry.

Phineas and Ferb: Across the 2nd Dimension Sets Records!