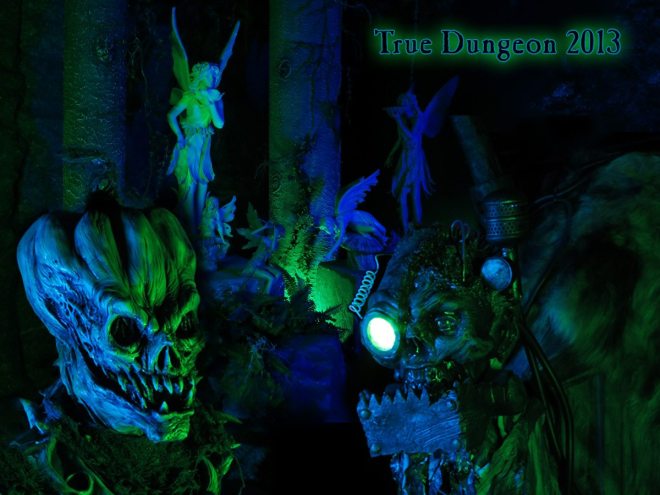 At Gen Con 2013, GeekDads Jonathan Liu, Dave Banks and I joined a couple other friends for a round of True Dungeon. Having heard a lot about this live-action fantasy role-playing adventure, by the time our Friday evening time-slot rolled around, we were more than ready to gear up and experience it for ourselves.

Here’s how Jonathan neatly summed up True Dungeon in his preview post:

There are actors in costume, puzzles to solve, and (simulated) combat. The idea is that you’re in a role-playing adventure, but instead of rolling a D20 you actually get to disarm traps or memorize glyphs to cast spells.

That’s it in a nutshell, but it’s much more difficult to kind of capture things like the tense anticipation before you go into your first encounter, or the genuine triumph of adrenaline rush that you get when your party solves a tough puzzle or takes down a vicious opponent.

You start by choosing your role from a stack of character cards provided to each party. I opted to play a monk. Then you equip yourself using armor and weapons and other accessories using an assortment of plastic tokens. (You get 10 with your ticket, but you can also buy or trade for others of varying degrees of scarcity and in-game power.)

The 2013 edition of True Dungeon included four possible adventures. Two storylines – Lycans Afoot and Golembane – were each playable in either puzzle-oriented or combat-oriented fashion. (Taken together, they also functioned as two chapters in one overarching story, although each adventure stood on its own just fine as well.)

Each adventure consisted of seven rooms (not counting the coaching room and the training inn), with about twelve minutes allotted per room. Our Lycans Afoot puzzle quest was a 5-2 puzzle-to-combat ratio. When Dave Banks and I went through Golembane’s combat-oriented quest, the balance was four battles to three puzzles.

Without going into a ton of unnecessary detail, combat is handled by sliding discs toward a tabletop target. It combines a bit of skill with some RPG tactical considerations like weapon and attack choice. (Magic-users in combat generally don’t slide discs: Spell-casting involves either playing tokens or demonstrating attack spells from memory.)

Puzzle rooms are pretty self-explanatory: You’ve got to get the entire party across a river using a specific combination of planks and flagstones, for example, or decipher clues that enable you to mix the correct potion from a group of twenty containers.

There’s a time limit of about 12 minutes in every room, with a warning horn and red light to let you know when you’re up against it. Yes, it’s just a big game of pretend, but I’ll admit that during one particularly difficult challenge, I got a genuine adrenaline rush when we achieved our goal and hoisted our trophy just seconds before time ran out.

Players don’t have to keep track of things like armor class or combat advantage or to-hit/damage rolls: The dungeon masters chart all those things for you – all you have to do is keep track of your own hit points using the markers on your character card, subtracting and adding as necessary.

Most of the dungeon masters (there’s one running each room) were enthusiastic and encouraging, and some were terrifically in-character. Their attitude could be infectious: More than once, our rogue got fully into his role, crouching and sneaking into the rooms, cautiously looking in the corners and darting his eyes around nonstop.

While it’s fun, True Dungeon isn’t cheap. Admission this year was $44 per person, per adventure, so for an event that lasts about two hours, let’s call it about the equivalent of an average concert ticket. Looking at it in the context of a once-a-year special treat might ease the sticker shock somewhat.

So, how do you get the most out of your time and money?

If possible, we recommend trying to line up a complete, 10-person adventuring party of friends and/or family in advance. That’s the mandatory True Dungeon party size: You can go through with a smaller party, but you’d have to buy the remainder of the 10 tickets for your time slot to do so. Point being that if your party is less than 10, you’re likely to be teamed up with strangers.

Yes, we know that Gen Con is, in large part, about sharing new games and making new friends, but here’s the thing: Planning ahead and putting together your own party means you go in armed with the knowledge of everyone’s real-life thinking skills and physical coordination, which will come in handy. When you’re faced with a straightforward logic puzzle and a time limit, for instance, you might be better off with one or two people working on it than trying to sort through everyone’s input. Got someone with a particularly sharp memory? You might encourage them to play a character which involves recalling spell patterns or runes, since those will figure into the quest.

Assembling your own party seems like it also reduces the potential for friction between casual and intensely competitive gamers. Or at least it would make it your own darn fault.

Especially your first time, get there a bit earlier than your recommended time, so you can not only soak in the atmosphere, but also so you can start building your character. Part of the fun is fishing through your tokens as a group and sharing the items your character can’t use, so that everyone is as well-equipped as possible.

When the trainer tells you to devise a smooth, quick system for running combat, listen. This may not have played a crucial role during Lycans Afoot, but on our Golembane run, Dave and I were part of a party that did this really well, and I’m sure it earned us a few extra rounds of combat over the course of the adventure.

Look: Even death isn’t so bad – and I should know, because I got killed with two rooms left in our puzzle quest, and I still had fun. (During Golembane I survived to the last room – where we all died.)

So, GeekDads, let’s wrap it up:

Would you do it again – why or why not?

John: Almost definitely, especially if I could get together a full party. It was one of the high points of my weekend, not just because of the game itself, but because of the opportunity it presented for the entire group of friends I was visiting Gen Con with to play together and share a couple hours having a blast.

Jonathan: Absolutely. Going into Gen Con, True Dungeon was the one thing I’d been told I absolutely needed to try, and I’m glad I did. I do think it’d be better knowing the rest of your party, even if it’s just getting together a while before the adventure, because we didn’t know our entire group and so we didn’t know strengths and weaknesses.

Dave: I definitely would. The game felt so real, I finished covered in sweat both times. It was quite stressful. Although, if I were to jump in again, I’d try to fill a complete party myself. While it’s fun to play with new people, your fate is dictated by those you play with and I’d rather win (or fail) with my friends. At least that way I can give the rogue grief for massive failures.

Which style of play did you prefer – puzzle or combat?

John: If I was only going to do one, I’d probably go for the puzzle-heavy adventure, because I thought it felt like a little more of an immersive experience: You actually have to solve the problem you’re facing, as opposed to devising an RPG-style combat strategy and sliding your discs accurately when fighting enemies.

Jonathan: I didn’t do the combat-oriented track, but the balance of combat to puzzle seemed about right to me in the puzzle track. I don’t know that I’d think it as worthwhile to spend the whole time flinging disks.

Dave: While I enjoyed both versions, the puzzle adventure was preferable to me. The challenges were clever and fairly difficult. I really enjoyed them and working together as an adventuring party was very enjoyable. Plus, I’d rather lose because my brain couldn’t figure out how to solve a puzzle than fail because I was bad at sliding a puck. When faced with a puzzle, it definitely felt more like a real challenge (as opposed to “fighting” a werewolf).

Thoughts on suitability for kids? (True Dungeon has a minimum participation age of 12.)

John: I think the 12-year-old minimum is about right. There’s enough of a mix of skills required that they’ll be able to participate at whatever level feels comfortable. That said, I think it’s important for parents to know their kids, and their familiarity with games: You probably don’t want your young ranger darting into a room and pushing the big red button before the party’s ready.

Jonathan: Yeah, our rogue, the youngest in the group, decided to go against the entire party’s insistence and did the one thing the DM told us we knew we weren’t supposed to do — and then suffered for it. It was rough not having the rogue for the last couple of rooms. Between the difficulty of the puzzles and the need for attention, I don’t think I’d go much younger than 12.

Dave: My son is 11 and he *really* wanted to go to Gen Con, simply for True Dungeon. I don’t think he would have done very well at the puzzles, although he probably would have done OK at the combat. It’s a challenging adventure and one that requires critical thinking that might really challenge those under 15. That said, as long as the player doesn’t take on a critical role (fighter, cleric, rogue, etc.), younger players will really enjoy True Dungeon.

One tip for next year’s newcomers to True Dungeon?

John: Sounds obvious, but more than anything, have fun. Suspend your disbelief, appreciate the theatrics, interact with the characters, and shrug off the unfortunate die rolls. Revel in not knowing the answers or the outcome or what you’re supposed to do next. Also (bonus point of advice), if you’re playing a monk: Your bare hands are indeed deadly melee weapons. But take along a crossbow anyway. Trust me.

Jonathan: Don’t dawdle! All but one of our party were completely new to True Dungeon, and I think we spent a lot of time in each room just wandering around, looking at things, and not getting down to combat or puzzle-solving quickly. I also didn’t cast many of my spells as the cleric because I wasn’t sure how long I needed them to last. Turns out I should have been casting much more often.

Dave: Don’t be afraid to role play. It definitely adds to the realism of the adventure and, beyond that, it’s just fun. When your party is selecting characters, talk about some general strategy. A party doesn’t do well with too many leaders. Choose one.

The second time through, John and I had a really good coach that stressed the importance of orderly combat. By lining up, sliding our pucks, and immediately getting out of the way, we probably got two or three more rounds of attacks in on the monster, killing him sooner, than our disorganized attacks on the first run through. I’d also add that, while some people sell tokens (for pretty outrageous prices), you can easily get by with the basic tokens for a novice/normal adventure.

It’s not easy to sum up the experience of True Dungeon, so if you have specific questions about our adventures, ask them in the comments!

Disclosure: GeekDad received free admission to the puzzle-oriented version of Lycans Afoot!, as well as permission to take some photos within True Dungeon.