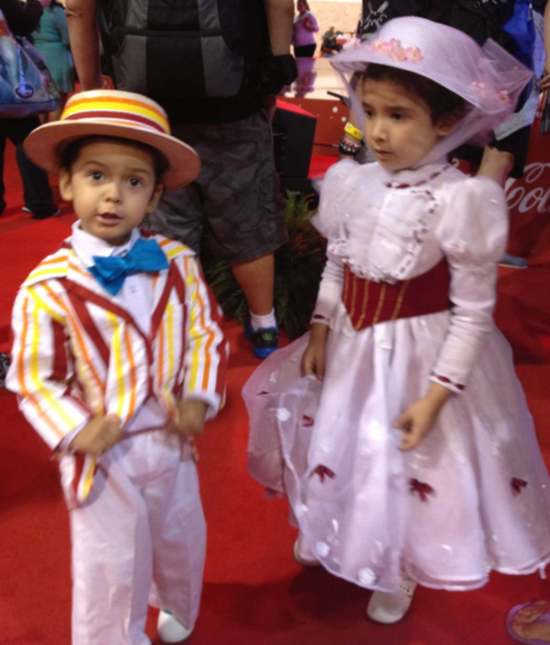 Of all the cons I’ve been to throughout the years, I have to say the cosplay at D23 is top notch! The level of fandom and complete devotion to detail is unparalleled. Rather than store-bought pieces, most Disney cosplay is a labor of love. From hours of hand-stitching to custom made jewelry, Disney fans go the extra mile to bring their favorite characters to life.

I rarely take pictures of kids at conventions, mostly because I don’t allow my own kids to be photographed, but some of these outfits were so amazing I couldn’t help but share. I asked the parents for permission, and all of them were happy to oblige, and proudly tell me how they’d made the costumes themselves.

This little girl’s dress stopped me in my tracks. It was a unique tribute to Disney’s transportation films, Cars and the newest release Planes! Her mom appliquéd the characters and made the jewelry from the necklace to the hair-bow, and she happily posed to show off every detail!

This is how dedicated Disney fans are, they cosplay characters for movies that haven’t even been released! I saw this girl at the Frozen pavilion looking at the displays, making sure her cosplay was correctly detailed. Adorable! She was a perfect “Anna” from her hair to the fringe on her cape!

I had seen these two kids earlier in the day but didn’t want to bother them. When I saw them as the hall was closing, I couldn’t help but ask their mom about their costumes. The most elaborately costumed Bert and Mary under 4′ tall, the attention to detail is exquisite and all custom made by the kid’s grandmother.

Okay, so she’s not a kid but she was cosplaying with her mother! These two were quite a crowd pleaser on the show floor. Many Disney fans dress as rides but the level of thought put into this costume was incredibly creative. From the mom as a StarSpeeder 3000 (a genius way to get the crowds to part in the aisles) to the Star Wars “flight attendant” costume. From her Millennium Falcon Pan Am badge to her Death Star stewardess bag, she had it all!

Big applause to all these parents and their cosplaying kids. Keep encouraging your kid’s fandom!