Gen Con’s slogan is “The Best Four Days in Gaming” and while we might revise it to the best four days and nights in gaming, GeekDads Jonathan Liu, John Booth, and me, Dave Banks, spent last weekend in Indianapolis rolling dice, moving meeples, and generally having a great time. While we’ve all somewhat reluctantly returned to our day jobs, we thought we’d take a look back at what we enjoyed the most about Gen Con.

“The thing I liked most about Gen Con was the games.”

That’s what I’m expected to say, right? After all, that’s what Gen Con is all about–tabletop games. But although I had a tremendous amount of fun playing games, I think what I enjoyed the most was being surrounded by people who love games. I loved staying up late and having conversations with people–about games, game design, Kickstarter, kids, food, costumes, you name it. I spent nearly 24 hours over the course of the weekend just walking around the exhibit hall talking to people, and it still wasn’t enough.

After the exhibit hall closed, I’d go to the gaming area with the intention of just playing games for a few hours. And I did play games, but I probably spent as much time or more just talking to people: greeting old friends, meeting people I’ve known online for the first time face to face, making new friends. I’d plan to go back to the hotel room at midnight to get some sleep, and end up having to beg off at two o’clock, three o’clock, even though I would have gladly listened in on these conversations for hours more.

I could try to pin down a particular game or event that was my favorite, but that would be for this year. My tastes are fickle; I know that. I’m attracted by the shiny and the new.

But that connection to other gamers–the way you can sit down by a complete stranger and then discover you’d love to spend several hours hanging out with them–that’s going to be true of Gen Con every year, and that’s my reason to go back.

The thing I liked most about Gen Con was the unexpected.

My short answer to “How was Gen Con?” can be condensed to four words: Physically exhausting, mentally invigorating.

I’ve been to four Star Wars Celebrations and the inaugural PAX East, so I’m familiar with the grin-inducing atmosphere and energy of large geek conventions, and the thrill of being in a crowd of people who share your excitement.

What I was unprepared for, though, was the different feel of Gen Con. I think I realized it somewhere around Saturday morning, when, despite the late nights, early mornings, and the amount of walking, standing, and hauling around a messenger bag, I was really energized.

I think it came down to this: Generally, the big conventions I’ve attended have offered tons of cool things to see and hear — panels or Q&A sessions featuring producers and model-builders and actors; presentations on toy prototypes or special effects; interviews and sneak peeks and art exhibits. And these things have been amazing and fun and mind-blowing, and I love them.

But while you can find similar offerings at Gen Con, the overall vibe of the place was one not of seeing and hearing, but of doing. People packing the exhibit hall not just to look and shop and get autographs, but to learn new games or play updated versions of old favorites, and share their discoveries with both friends and total strangers. Rows and rows and rows of occupied tables in the open gaming hall. The corridors still lined with dozens of people long after dark, sitting on the floors and just gaming together.

I played 15 games during Gen Con, 12 of which were completely new to me. They included everything from stacking/coordination games to memory-based challenges to deck-builders and role-playing games. (And True Dungeon — which will get its own separate post.) And there’s not a doubt in my mind that this near-constant shifting of games and fellow players and strategies and goals played a big part in not just keeping me going, but eager to do more.

Like Jonathan and John, I was overtaken by the pleasure of soaking in geek culture. Then again, I always am at conventions like this. You can’t help but spend the weekend with a big, goofy perma-grin on your face. However, there’s a bit of an emotional hangover leaving cons like this one. The sheer joy of being around so many people who share your passion is intoxicating and leaving it behind is very difficult.

In some ways, it’s like visiting Disneyworld; there’s a suspension of reality that envelops you. Wouldn’t it be great to be surrounded by people who share your passions all the time? Isn’t it really wonderful to be able to do your own thing without the looming agitation of judgment?

I was reminded of this fantasy when Jonathan and I sat down to lunch Saturday afternoon in a nearby restaurant. As we chatted about games we had played and a few we were looking forward to, a couple of bros and their girlfriends sat down near us. I watched them as they giggled and smirked at another Gen Con attendee in the restaurant who was cosplaying as a steampunk adventurer. Their ugly behavior shocked me back to the realization that conventions like Gen Con are just a verisimilitude of how life could be for geeks. Still, I celebrate attendees like the clockwork adventurer; I am happy cons like Gen Con provide a place for him to express his obsession — and for all of us to enjoy being with each other.

Thinking about it more, the analogy to Disneyworld holds. Gen Con is similar to an amusement park full of fun and enjoyment. Like the acres and acres of roller coasters, attractions, and rides in Orlando, there is so much to see and do at Gen Con, no mere mortal could be expected to see and do it all. (Not to say that we didn’t try.)

Still, it is a convention dedicated to board games and, among all of the, literally, thousands of panels, competitions, demos, parties, and magnificence that was on display at Gen Con, there were two games that really stuck out to me. Yes, they were shiny and new, but they were still wonderfully good and fun and definitely worth checking out. 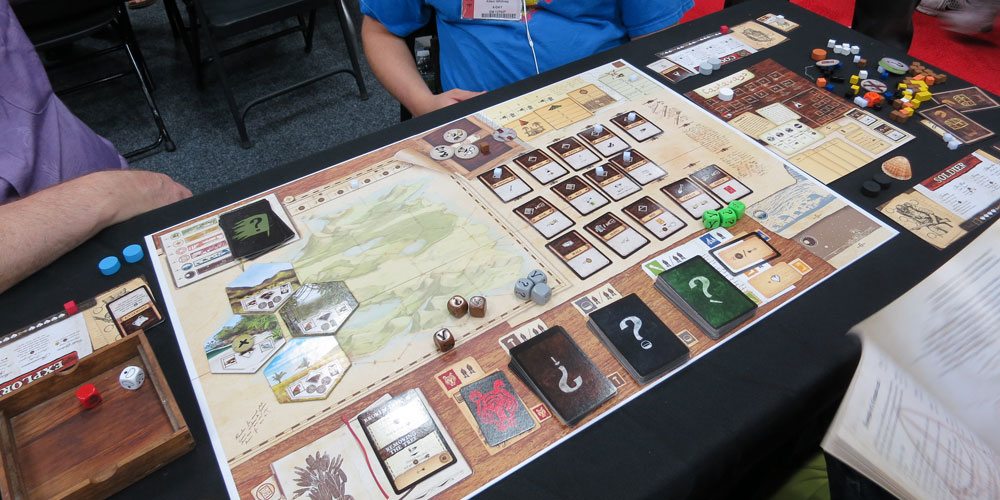 First was Robinson Crusoe: Adventure on the Cursed Island, from Z-Man Games, a cooperative game for one to four players. It’s a fairly complex game about surviving after a shipwreck and leans heavily on the theme of the Daniel Defoe novel. The game is outstanding, with a high sense of urgency, story-telling, and does a better job at getting players to cooperate than any game I can remember playing. It didn’t hurt that the game’s designer, Ignacy Trzewiczek, taught us. He was funny and engaging, and just a great ambassador for gaming. Days later, this is the game I keep returning to, thinking about how much fun we had, when I might be able to play again, and trying to figure out a way to justify its hefty $80 price tag. Robinson Crusoe: Adventure on the Cursed Island is out now. 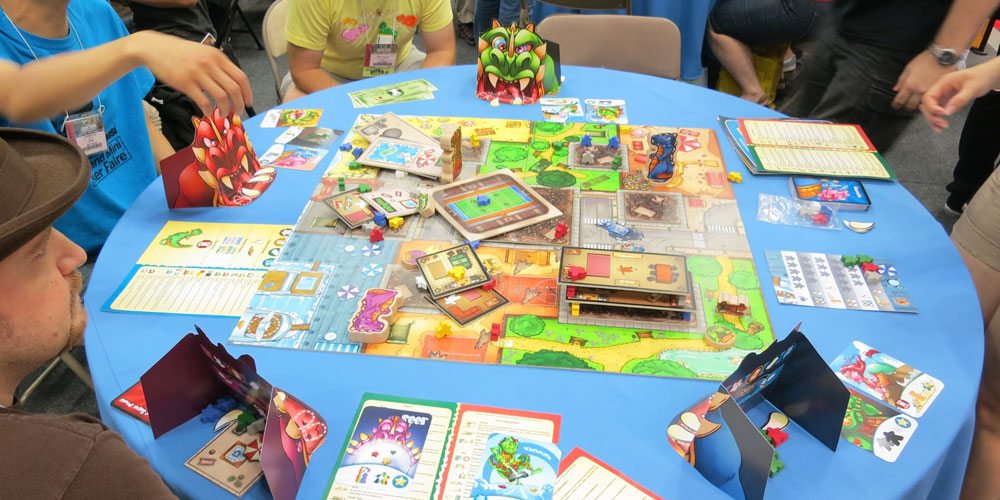 The other game that should be on everyone’s list is Rampage, from Asmodee games. Similar to the arcade game, Rampage presents a city with buildings featuring Meeples holding up floors of buildings. Each player has a monster he uses to crush the city and fight the other monsters. On your turn, you can move, crush buildings (by dropping your monster token on the board), throw cars, or blow over opponents or buildings with your fearsome breath. The game is from all-star designer Antoine Bauza and ridiculously fun. We played on an oversized version, but I can’t wait for the real thing to hit store shelves in November of this year.

Gen Con is a lot of things to me. It’s playing games and meeting people I first met online. It’s reuniting with old friends and making new ones. It’s seeing new games from big publishers and sitting down and playing a game that some guy created on his printer at home. But more than all of that, it’s about being with others who love tabletop games as much as I do. And that’s just awesome.

Bingo Link Game Asks “Can You See What I See? “

2 thoughts on “Our Favorite Things About Gen Con”