Most of the comics I’ve listed in my serious comics posts are ones that I would argue qualify as capital-L Literature. Of course, there are plenty of non-comics books that qualify as Literature already—and some of those have been turned into comics. Adapting an existing book for comics can be tricky: fans of the original may already have images of the characters in their minds and could be disappointed in the visuals; others may lament the portions of the book that didn’t make the cut.

Comics adaptations also raise some other questions as well. Is the point of, say, a comic-book adaptation of The Martian Chronicles intended to stand alone, or to inspire somebody to seek out the original? Is a picture really worth a thousand words? Certainly a comic book is usually quicker to read, but depending on how it’s handled, things can get lost in translation. Conversely, some adaptations try to keep more of the original text, making it more of an illustrated book without letting the images do the work. (An example of the latter is this version of Bram Stoker’s Dracula, which features illustrations by comic book artist Becky Cloonan alongside the unabridged original text.)

Here are a handful of literature-based or literature-inspired comics that we think are worth reading. My recommendation: if you like these, then seek out the source texts as well. 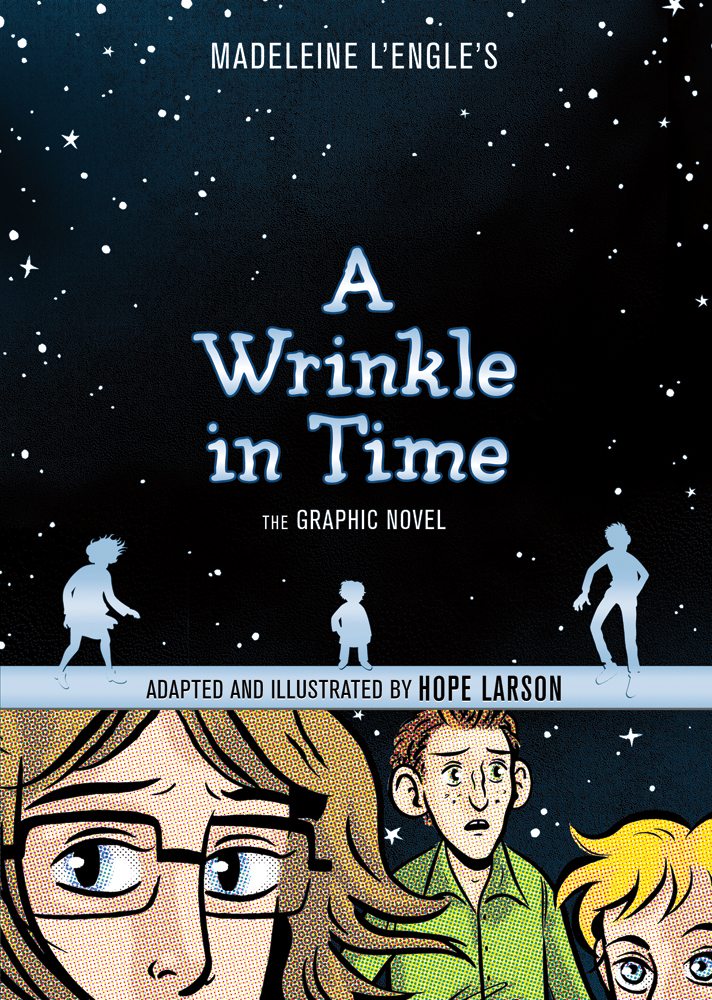 L’Engle’s classic book is my wife’s favorite, and we own several copies of it, along with the other books in her Time Quartet. So I was pretty excited when I found out about the graphic novel, adapted and illustrated by Hope Larson. The comic follows the plot of the book pretty closely, lifting sections of dialogue, and I really enjoyed seeing this version of the story. However, this is one of those cases where fans of the original might be divided. My wife found it difficult to read because the characters just didn’t look the way she imagined them. It’s like watching a movie of your favorite book and being unhappy with the casting.

We’d assigned A Wrinkle in Time to our oldest daughter for summer reading, and she was having a bit of trouble getting started, so I handed her the graphic novel. She devoured it in an afternoon—and now I’m hoping that piqued her interest enough to give the original a second shot.

Let’s start off with one for parents and kids. Now, living in Kansas for many years has made Wizard of Oz jokes pretty old, but the book itself is still a great (and really weird) read. The comic book adaptation by Eric Shanower and Skottie Young won two Eisner awards in 2010, and is a fun way to introduce the story to your kids before reading the original, or to extend the experience after reading L. Frank Baum’s prose. If you like the first one, there are a couple more in the series as well.

Shanower is no stranger to comic book adaptations, either: for his retelling of the Trojan War, check out his Age of Bronze series as well. 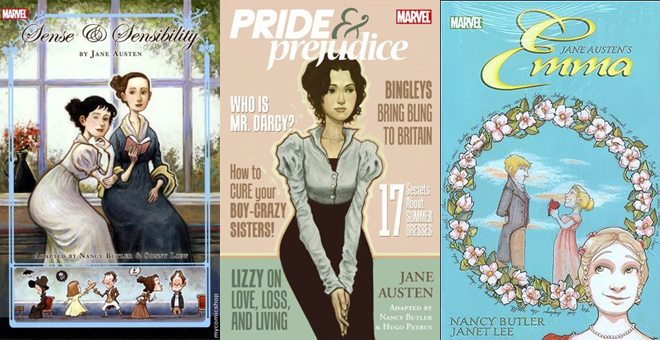 Jane Austen’s novels are full of very subtle action that isn’t always accompanied by dialogue. Internal monologues, a stolen glance, or just two hands silently brushing against one another can mean everything. This kind of plot progression is very common in these books, and is perfect for panel after panel of flirty looks, agonized pining, and sitting room scenes. A good artist can convey these emotions and events without any words.

But the words are just as important. In Marvel’s versions of the Jane Austen masterpieces Sense and Sensibility, Pride and Prejudice, and Emma, condensed versions of the stories containing plenty of direct quotes carry the graphic novels through the ups, downs, joys, and disappointments of the originals. Reading the stories in graphic novel form is a very different experience from immersing one’s self in the long paragraphs of flowery prose that Jane herself wrote, but for anyone interested in storytelling through beautiful illustrations, reading these graphic novels is wonderful. 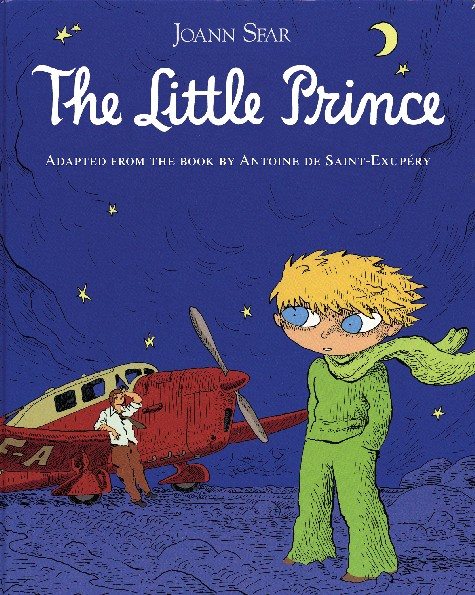 The Little Prince is a fascinating little book, one that is on its surface a children’s book but has some quite meaningful and profound undercurrents. It’s about hanging onto your ability to see the world as a child. Joann Sfar, who also illustrated The Rabbi’s Cat (mentioned in Part 4), created this wonderful adaptation of the book. Interestingly, it is not a straightforward retelling, but includes details that were not in the original.

In Sfar’s version, the little prince’s flower is a tiny woman inside a flower, and her petulant behavior is even more expressive. A lot of the dialogue comes from the book, but it’s interesting to see how Sfar took de Saint-Exupery’s little sketches and created entire worlds based on them. 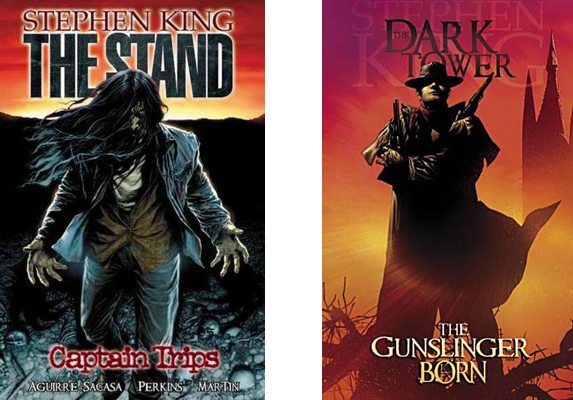 The Stand and The Dark Tower — Stephen King

Some people love Stephen King, some people hate him. But you can’t argue with the fact that he has written some significant and influential pieces of fiction. How do these translate to the comics medium? GeekDad Z. has this to say about The Stand and The Dark Tower:

Between an award-winning television mini-series, a musical tribute by thrash giants Anthrax and multiple versions of the novel itself, Stephen King’s The Stand was likely the last book that needed to be reinterpreted as a comic. Yet Marvel’s take on the source material – released as six limited series over the span of half as many years—managed to capture all of the action, emotion and chilling characterization of the tale’s lengthy 1990 Uncut Edition. Adapted by writer Roberto Aguirre-Sacasa and illustrated by Mike Perkins, each volume of this post-apocalyptic meta-morality play is available as a self-contained graphic novel, and a massive omnibus also seems to be in the works for later this fall.

Similarly, King’s never-quite-complete epic, The Dark Tower, has also made the jump to sequential art thanks to the team at Marvel Comics. Kicking off with 2007’s The Gunslinger Born, this ongoing project does what King himself did not—it presents the tale in chronological order. Helmed by Stephen King’s own research assistant Robin Furth and geek-lit icon Peter David, the series may take certain liberties with the original plot, but it never loses sight of the Tower. The earlier adventures of Roland of Gilead are especially enjoyable thanks to the stunning visuals of recent DC defector Jae Lee. The 300-page collected edition takes new readers all the way through the infamous Battle of Jericho Hill, and even now the story continues as the Gunslinger and his young ward Jake pursue the Man in Black through the treacherous tunnels of the Cyclopean Mountains.

If you want some really heavy duty literature-based comics, The Graphic Canon is a project you definitely want to check out. Russ Kick started off with the idea of making a comics anthology of Western literature, and had a hard time selling the idea. Eventually Dan Simon of Seven Stories Press took him up on it—and then it grew from a single volume to three 500-page volumes. As they found writers and artists, they expanded the reach to include Eastern literature and works from other cultures. You won’t get a really large chunk of any particular work, but you’ll get a small taste of a lot of different works: the first volume alone includes 55 stories, from an excerpt of the Epic of Gilgamesh to various books of the Bible to Native American tales to the Canterbury Tales. There are stories from China, Babylonia, Greece, Egypt, Peru, Scotland, and more.

The first volume was published in May 2012, the second arrived in October 2012, and the third in June this year. There’s also a box set due in October this year. The books themselves are enormous softcovers—not the sort you could probably read in bed. I do hasten to point out that, although this could be a very useful educational tool, it does of course include a lot of adult content. Aristophanes’ Lysistrata involves women going on a sex strike, and depicts the, uh, unsatisfied men walking about. There’s one of the more risque stories from The Arabian Nights which usually gets omitted, and I don’t even feel comfortable sharing the title on a family site. I would imagine trying to teach literature to middle schoolers with this might result in more titillation than edification—but for more mature readers it’s an amazing collection.

The quality of the writing and artwork can be a little uneven, as with any anthology. Some of the adaptations are weak on their own, but as a whole it’s a treasure trove for literary comics fans, and there are some big names included like Will Eisner and R. Crumb. Some of the stories are pulled from previous publications, but many are new to this collection. Kick gave artists a lot of flexibility in their approach, medium, and style, but asked that they stay true to the source materials: “no setting it in the future, no creating new adventures for characters, etc.”

For more about The Graphic Canon, visit the website. 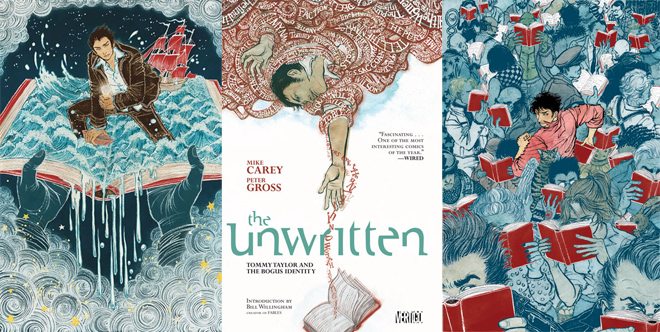 The Unwritten, written by Mike Carey with art by Peter Gross

Here’s one that is not actually based on a book, but is inspired by various works of literature and the idea of literature itself. GeekDad Dave Banks recommended this to me a while back and I’ve been catching up on it; here’s his description:

The Unwritten is a comic that has never enjoyed much popularity, which is a shame because it is an intensely original and enjoyable book. Carey began his career writing Lucifer, a spinoff of Neil Gaiman’s Sandman, which Gross also illustrated. On The Unwritten, the two have collaborated to create one of the most original literature-based comics on the market today.

The story in The Unwritten follows the tale of Tom Taylor, whose father wrote Harry Potter-esque books with a main character named, not coincidentally, Tommy Taylor. This has led to a lot of resentment and frustration for Tom, as an army of fans think of him as the fictional character Tommy. It’s a misidentification that Tom exploits by appearing at conventions and milking his tangential celebrity status. Tom eventually finds himself on a supernatural journey, in search of his missing dad and a greater understanding, that winds in and out of literary works like Moby Dick, Frankenstein, and Winnie the Pooh (which Carey has said is the real inspiration for the story). Along the way Tom is chased by a secret society and discovers magic powers he didn’t know he possessed.

The result is an complex tapestry that will leave readers unsure what to expect next. As quickly as Carey shifts gears in the plot, Gross matches his pace, changing his artwork to conform to the demands of the story. One of the greatest twists appears in issue 12 when all of the story’s protagonists spend an issue as characters (and in a setting) similar to the Hundred Acre Wood.

What makes The Unwritten so compelling are its twists and turns. It’s refreshing to read a comic that really breaks conventions and isn’t afraid to try new things. If you love literary references and original story, you owe it to yourself to check out The Unwritten. However, be sure to start with issue one. Like any work of literature, you’ll likely find yourself lost if you pick it up in the middle of the story.

Click here to read the previous posts in this series:

Disclosure: GeekDad received a review copy of The Graphic Canon and A Wrinkle in Time. 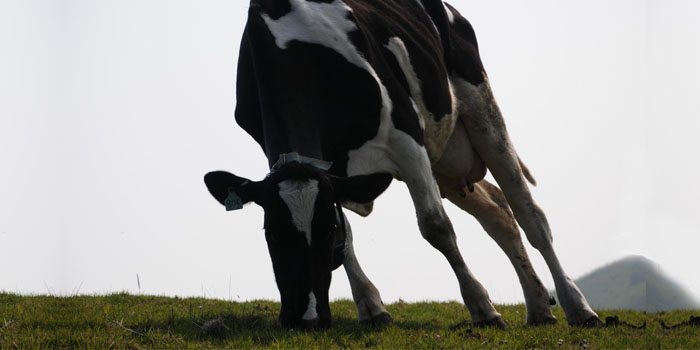