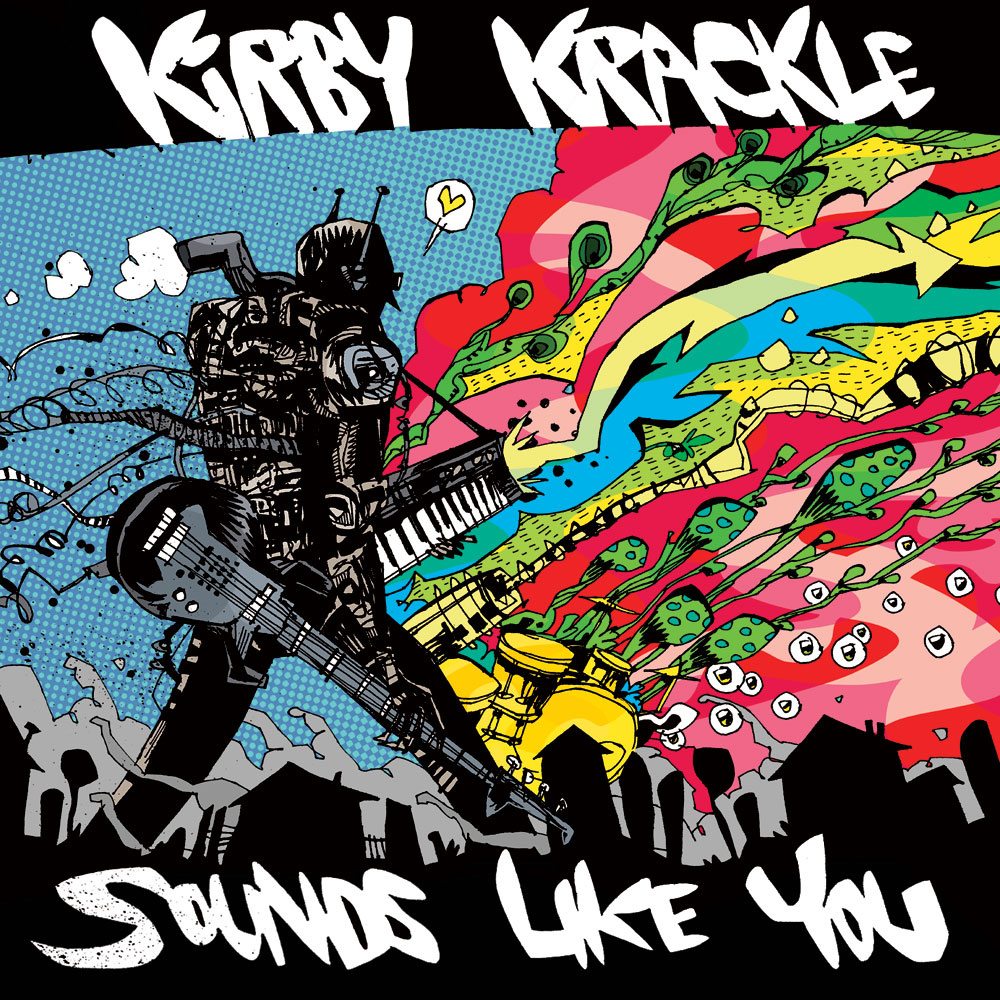 When I first started writing about geeky music back in 2006, it was a pretty novel concept. Not necessarily the idea of this particular brand of niche digital journalism, mind you, the very nerd music scene itself. Sure, popular music has always had its Tom Lehrers, its Led Zeppelins and its DEVOs, but somehow the idea of a dedicated underground movement that’s both keenly aware of its nerdiness and downright proud of it is a fairly modern occurrence.

Of course, in the seven years since there has been a definite shift, a graduation of sorts. The Protomen have performed their veritable video game rock opera as the opening act for Tenacious D, sarcastic and studious rapper mc chris has contributed music to the works of director Kevin Smith and, most recently, chip-rockers Anamanaguchi have made their network television debut on Late Night with Jimmy Fallon. Oh how far we’ve come!

Yet our music – and, sadly, our very culture – often still remains insular, exclusionary, damn-near dogmatic. The solution? As the once fringe pursuits of like-minded geeks become the very trappings of the broader popular culture, our torchbearers must similarly expand their musical repertoire.

Just this week two acts from the expansive and inexact subset often referred to as “geek rock” have released amazing new albums that do just that. They not only push the bands’ limits with regard to instrumentation, they also take on lyrical themes that are both relevant to – if I may borrow the phrase from digital gangster himself, YTCracker – nerd life and also reflect a more universal significance.

Seattle’s Kirby Krackle has long been a personal favorite, and while Sounds Like You, their fourth full-length, is every bit as engaging as their previous work, it certainly propels their trademark guitar rock to new heights. Though the core of KK remains co-lyricist Jim Demonakos and singer/songwriter Kyle Stevens, Sounds Like You sounds much more like a full band effort.

It opens with “Parachute,” a pretty straight-ahead mid-tempo love song, but one with a bit more keyboard melody (compliments of Bryce Francis) than the traditional Krackle joint. “Set Your Phasers to Sexy” is a similar synth-pop celebration of nerd love with more than a hint of The Rentals, especially in its sing-along ooh-ooh-ooh chorus.

I anticipated a slow jam from a ditty called “Cozy Pants O’Clock,” but ended up with a groove-heavy rocker focused on the simple joy of relaxation. Though not particularly geeky with regard to theme, it’s easily one of the album’s best selections. “140 Characters” examines the travails of online romance – a theme also explored on the new Doubleclicks album – with a gorgeously infective chorus that channels their classic E for Everyone output.

Its mid-point, “One More Episode,” is a previously released tribute to nights in with Netflix and the one you love, and lead single “Grandma’s House” is a funked up rager dedicated to time spent with your granny. “Take You Out Tonight” has an ethereal intro that bleeds into a raucous power-pop proclamation of affection, while the acoustic-rooted “Cosplay Queen” is yet another Kirby Krackle con anthem, albeit one that exploits geek rock elements while still coloring outside stylistic lines.

Their “Taco Night” is not to be confused with the Parry Gripp track of the same name, but follow-up “The Same Thing” isn’t likely to be mistaken for any other geeky rock track. It’s instead a forward-thinking expression of the universality of love, without regard to individual orientation – a simple sentiment, sure, but one that needs to be shared now more than ever.

Last summer’s Spider-Man-centered tune “Web-Slinger/Hope-Bringer” makes an appearance as the album begins to wind down, and pairs nicely with “Moisture Farm,” a joint that ably reinvents the Star Wars musical narrative and is an instant nerd rock classic. This transitions to closer “North of the Wall,” a grunge rock song of ice and fire (See what I did there?) – noticeably their hardest-edged tune in quite a while.

Sounds Like You is unmistakably a Kirby Krackle album, even down to its phenomenal Jim Mahfood cover art, but it may not be the listening experience you remember. Kirby Krackle has expanded its sound, and, while that may frighten some longtime listeners, it’s truly an enjoyable experience that puts this growth to good use.

You can pick it up right now via Bandcamp, Amazon or iTunes. 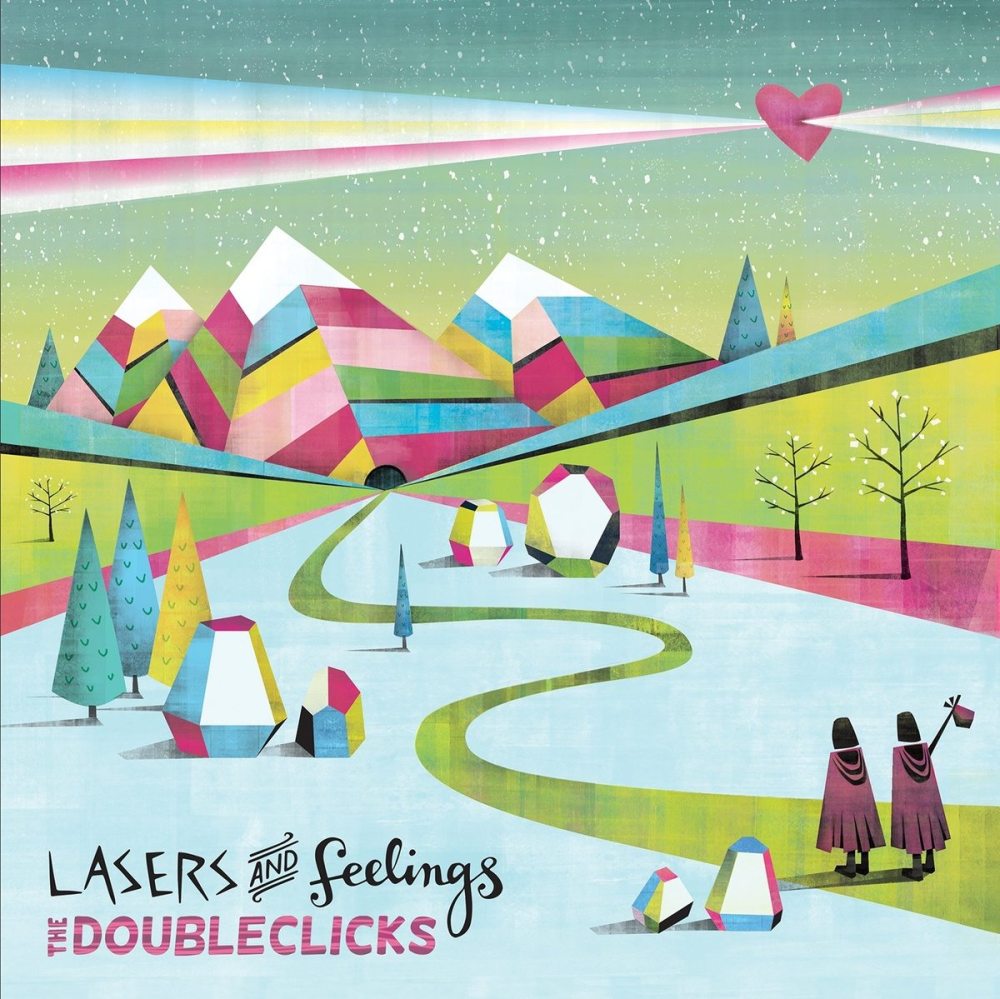 The Doubleclicks, for those not in the know, share a number of things in common with Kirby Krackle. They’re yet another genre-bending nerd music outfit from the Pacific Northwest whose name is nigh synonymous with the duo at its core – in this case sisters Angela and Aubrey Webber. And, as I alluded to earlier, their latest release, Lasers and Feelings, also pushes the envelope regarding what geek music can and should be.

Title track “Lasers and Feelings” starts things off with a ska-style upbeat rhythm that underpins a clever lyrical turn; it’s a supervillain love song. “Can’t You See the World Is Ending” sees Angela, as our narrator/humanity’s last hope, locked in a desperate struggle to block out the noise of the idle day-to-day while simultaneously attempting to defend the earth. Its perfectly layered instrumental textures are ably supported by a generous addition of brass, a motif that pops up throughout the album.

“The Guy Who Yelled Freebird” is a slow, plodding, sardonic composition that’s probably my favorite song not only by the ‘Clicks, but very likely of the year. (It’s not too early to call it, right?) Further, its slide guitar solo only adds the requisite twang to a narrative that is engaging, brilliant and biting… not to mention dreadfully relatable to anyone who’s ever played in a band.

This quickly turns to “Something Else,” wherein Aubrey takes the mic and morphs into a post-modern chanteuse, as passionate as she is hopelessly distracted (yet simultaneously contemporarily empowered – a recurring theme.) This song flows perfectly to its ostensible second half, “The Mystery’s Gone,” a tale of a Twitter romance gone bad. Its chorus harmonies are some of the sisters’ best yet, and the lyrical punch of lines like “Real life disappointed me like raisins in an oatmeal cookie” make this jazzy rock number another high point.

“Nothing To Prove” is surely the most important song on the album, a rejection of fake nerd girl shaming that is sadly necessary given our current (sub?)cultural climate. Oh, and the track itself is nothing short of perfect!

The album quickly switches gears with “Impostor,” a more lushly orchestrated take on a Song Fu entry from last January that’s still positively haunting; I loved the original, but this tribute to the Mars Rover is more beautiful than ever. Another quick turn takes us to “Rock Star Life,” with its intoxicating blend of Dixieland and country-rock that easily blends the real life rigors of the road with just the right amount of hilarious hyperbole. It’s hard to resist and another of The ‘Clicks’ best.

“Christmas Ain’t About Me” is a re-do of another previous release, this one the title track from last year’s holiday EP: an endearing tale of Aubrey’s older sibling malaise now in easy-to-swallow tango form. It also leads us to closer “Oh, Mr. Darcy,” a strong finish — though it previously opened 2012’s Chainmail and Cello — that boasts some practical advice for girls (and guys) about not dating jerks. It’s a playful jam that alternatively vilifies and glorifies Colin Firth’s turn in the Pride and Prejudice miniseries, even going so far as to explain “you wily old bastard, you wonderful specimen / you’ve messed up the hearts of young girls ’round the earth.”

Each of these magnificent tracks is available through the standard vendors: iTunes, Bandcamp and Amazon MP3. Pick your preferred pony.

My conclusion to this lengthy epistle? Buy both.

Okay, that’s not a particularly graceful way to end this. Allow me to elucidate.

Sounds Like You and Lasers and Feelings are not only great albums, they are important albums. They are indicative of a shifting paradigm within the geek music meta-community that runs simultaneously complementary and counter to the integration of nerdier fare into the broader entertainment world.

Where we were once on the outside looking in, now our tribe – with our comics and our Cards Against Humanity and our “For the Horde” t-shirts – is as big a part of the mainstream as cheeseheads or automotive enthusiasts. Unsurprisingly, this brave new nerd world makes a portion of our kind very uncomfortable. But while some lament this as a blasphemous watering down of traditional geekery, others, like the songwriters in question, use it as yet another reason to further expand their own musical/lyrical horizons.

If the casual fan can appreciate X-Factor and The X-Factor, then the hardcore nerds are equally freed. They can write songs about Hodor and heartache, about sexism and Star Wars. And it’s exactly that blend of personal reflection, cultural appraisal and fierce fandom that make The Doubleclicks and Kirby Krackle great, no matter how you describe their creative output.