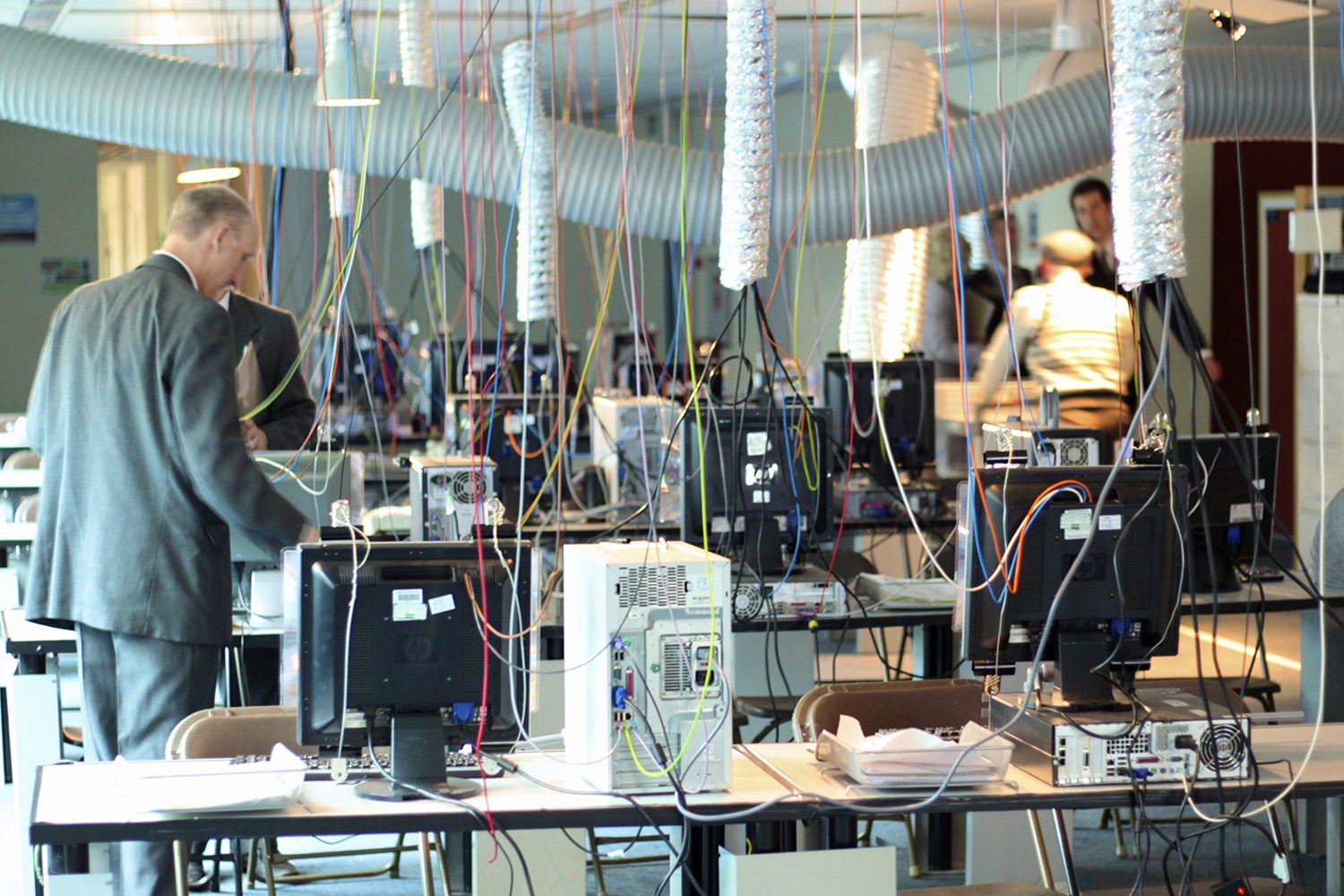 Tell No One. That’s the mantra of Secret Cinema. You buy your ticket and you take your chances. £45 is a lot of money to see a movie, especially when you don’t know what that movie is, but that’s all part of the experience. The build up for their 20th production — which merges cinema, theatre, audience participation and social media — began around the start of the year, not long after their previous excursion into The Shawshank Redemption had finished it’s secret run.

Teasers began to appear on the Facebook and Twitter streams, nothing more than photos and quotes alluding to many possible directions the choice of film could go in. Then we all received a press release saying that Secret Cinema had been taken over by a company called G.O.O.D., and not to worry, nothing would change. G.O.O.D. then began acquiring businesses and property at an alarming rate (leading me to think the film could be Wall Street), and before long it was announced that they owned 51% of the company that I worked for — as a freelancer/stay-at-home Dad, this was a bit odd — maybe they meant GeekDad?

I was required to fill out an appraisal form, I would then be informed whether or not I could continue in my current position. When my appraisal period was over, I received a notification that my employment would continue, and that I should log in to the company website at goodorg.co and begin networking with my new colleagues. The website was filled with more announcements of company takeovers and video advertisements for the products that G.O.O.D. sells, as well as a warning about a subversive element that we should watch out for. Could the film be 1984 perhaps?

As I was now an employee of G.O.O.D., I was given a new employee number, shown the dress code and told to report to the G.O.O.D. HQ building for a formal induction. The building, it turned out, was a disused office block in West Croydon, which had also doubled for a Gotham City hospital in The Dark Knight Rises. As the date for my induction grew closer, there was slip-up in the usually impeccable Secret Cinema organisation and an important license from the local council meant that the first weekend’s performances had to be cancelled at very short notice and the second weekend’s ran without any alcohol on sale. They turned this PR disaster around by offering everyone affected free tickets to a sing-along-dance-along screening of Footloose!

Keeping a close eye on goodco.org, it soon became clear what film we would be seeing. I spotted a logo for a company called “Central Services” on a TV screen in one of the video news segments that ran on the site (only later did we realise that the interviewees were actually the new employees of G.O.O.D.). “Central Services” (for those that don’t know) is a fictional company from Terry Gilliam’s 1985 dystopian, retro-future thriller Brazil, starring Jonathan Pryce. I haven’t seen the film for quite a while, but I do remember it being a good one and so when we set off for our inductions, dressed in 1940s-style outfits, we were excited at the prospects of what our future could hold!

Secret Cinema did not disappoint. From the moment we arrived at the HQ, we were immersed in the film’s world. The security guards where dressed in the police uniforms from the film, SWAT team-like police waited behind bushes to surprise employees, little Messerschmitt scooter/cars drove around the courtyard, and there were actors everywhere. Once inside we proceeded to our designated department on the second floor to meet our new boss, marvelling at the sets that had been constructed along the way. Steampunk-style computer terminals sat on desks surrounded by shiny foil ducts and there was paper everywhere.

Our new boss was very pleasant and welcomed us into the “family” and suggested where we should head next. Two floors up we met up with the rest of our group — who had been assigned to a different department and entered though a different door — conveniently in one of the bars and restaurants set up with the office block. We exchanged tales and were then asked to join the finance meeting, where we were tasked with solving the worlds financial crisis. Our solution was a four day working week allowing people more time to spend, spend, spend!

There were so many things to see and do that I could never list them all here — in fact we didn’t even manage to see everything — but here are just a few of them:

It took us a while to realise that the film screening had actually started as it was just being shown on hundreds of old TVs littered around the whole office block. We’d walk through “Paradise Tower” and see people huddled around a TV in a dingy room eating their Thai curry and watching a bit of the movie. Later on when it got darker, the film was projected onto the side of the building across the courtyard. We quickly decided that watching the film was not the main objective of the evening this time and continued exploring the 14 floors of the office block to see what else was going on.

At various points throughout the evening, set pieces were staged, including run-ins with the “terrorists,” a talk from Mr. Helpmann, interactions with the staff of Central Services and even a flying Sam Lowry in the courtyard. After we had been promoted (due to excellently writing a list of 10 suspicious female names and then drawing the most suspicious one!) a message came over the intercom that is was time for the “Wellbeing” service. This started out as a kind of yoga/tai chi affair, but soon became a crazy modern dance session performed by the actors who were all around us, with a few regular people joining in.

Whilst enjoying a cocktail in Helpmann’s bar on the 13th floor, I noticed a big rig of abseiling ropes set up over the courtyard and remembering the finalé of the film; we knew we needed to be around there when the movie reached its climax. After a brief panic caused by slow elevators we arranged ourselves with a good view of the courtyard. Suddenly a bunch of people burst into the foyer screaming and waving paper all around. It was the group from the anger management session earlier, and their leader was beckoning us to come with him. We said that we didn’t want to as we wanted to watch the finalé, at which point he said, “then you really want to come with us.” We followed and were amazed when we were led out into the courtyard to become part of the finalé itself, complete with over-the-top death scenes!

Another amazing night out thanks to Secret Cinema, and I don’t even mind that I probably only saw about 10 minutes of the movie in total; the immersive experience more than made up for that. I must say, though, I’m very glad I didn’t go to the One Flew Over The Cuckoo’s Nest production — imagine being locked up in a mental institution for the night!

When this one was first announced there was talk of it also running in New York, but that hasn’t happened as yet. When it does, I can’t recommend it enough if you’re in the area. Have a look at my full set of photos over on Flickr or this great set too, and see for yourself the amount of detail they put into each production. Next up for them is a performance based about the new album by Laura Marling and then another sing-along-dance-along extravaganza, this time for Saturday Night Fever.