If you grew up watching SF or cartoons on TV in the ’80s and ’90s, you probably enjoyed something Michael Reaves wrote. He worked on shows ranging from Star Trek: The Next Generation and Sliders to Batman Beyond and My Little Pony. He mostly writes novels these days, including some Star Wars books, but he’s also written a new film called Blood Kiss—a 1920s vampire story starring Amber Benson and Neil Gaiman (yes, acting!)—and is running a Kickstarter to raise funding.

Michael suffers from Parkinson’s disease, which has progressed far enough he can’t really talk, but he can still write. I had dinner with him at the World Fantasy Convention back in 2005, and he was vibrant, clever, and ambitious. Today, he’s working just as hard as ever to get this movie made. To that end, he’s brought in friends like Benson and Gaiman, but he’s also lined up legendary comic-book artist Tom Mandrake—penciller for Grimjack, The Spectre, Firestorm, and many more—and Tom’s talented daughter Sian.

Tom and Sian are teaming up to create the artwork for the Blood Kiss graphic novel Michael has written. He draws it, and she provides the colors. I interviewed the father-daughter team about the project and their process. 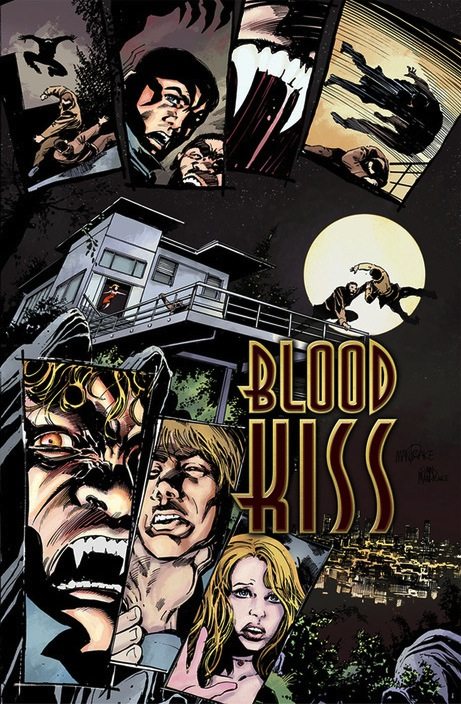 Matt Forbeck: How did the two of you become involved in Blood Kiss?

Tom Mandrake: Michael Reeves contacted me several years ago and asked me to do a sample page for Blood Kiss. I started it, got sick, and had to beg out. I felt terrible about bailing on him and figured that was the end of that. Then recently Michael and the Blood Kiss team got in touch with me and asked if I’d like to get back on board for the graphic novel and Kickstarter. I was so happy to get this second chance and jumped right on board!

Sian Mandrake: I first heard of Blood Kiss through my dad. I thought it sounded really interesting, but had no idea I would ever get the chance to work on it. I have colored a few other projects for him including Nexus for Twistory and a book that both he and my mom (Jan Duursema) worked on called Kill the Night for fashion designer Phillip Lim. I even worked on art corrections for him on “Without Sin,” a Batman story featuring Two-Face! So when he told me he would like to hire me on as the colorist on Blood Kiss, I was very happy!

MF: Sian, what attracted you to becoming an artist? Did watching your dad work seem like fun?

SK: I’ve always wanted to be an artist. I spent a lot of time in and around my parents’ studio growing up, so it has always been a huge part of my life. Yes, my dad always makes drawing look like a blast!

MF: Tom, what did you do to encourage Sian’s talents? Or did you try to warn her off?

TK: We’ve always encouraged Sian to pursue whatever she wanted, and she chose art. My wife Jan and I have been freelance artists all Sian’s life, so she knows what it means, she’s seen the highs and lows, the lack of security, the creative freedom… She can’t say she didn’t know what she was getting into!

MF: What’s it like working with each other on a project like this? Does it function better than it would if you were working with people outside your family, or are there certain challenges you have to watch out for?

SK: I enjoy working with my dad because we have a natural understanding of each other’s work. I think we work well together because our father-daughter relationship is strong, and that definitely transfers into our working relationship. We know how to work as a team, so it’s pretty awesome!

TK: Sian really understands my work. She knows exactly what I want in terms of color. We’ve always had a great relationship, and that flows easily into creating art together. As it relates to working outside the family, that’s hard to say. Every time I work with a new color artist, the relationship is different. There is no standard for me to apply—no outside versus inside scale to apply.

MF: What other projects are you working on right now? Do you have plans for any other collaborations in the future?

SK: Currently, I am illustrating a set of Topps artist sketch cards for their Star Wars Galactic Files 2 set as well as other projects of my own. There are a few collaborative projects in the works, one of which I hope to be able to talk about soon and the other illustrating a children’s book. I am always up for new projects with my dad or other creators. I hope to do more comic related projects in the future.

MF: Here’s hoping we get to see lots of that soon. Meanwhile, best of luck to you and the rest of the Blood Kiss team on the Kickstarter.

At the moment, the Blood Kiss Kickstarter has already funded and is pushing hard to reach some ambitious stretch goals. It wraps up just before noon Central Time on Friday, June 14, so be sure to check it out before it’s over.

Could Mario Be The New Tiki?