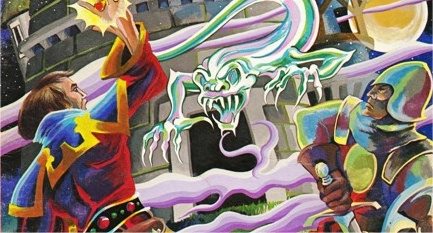 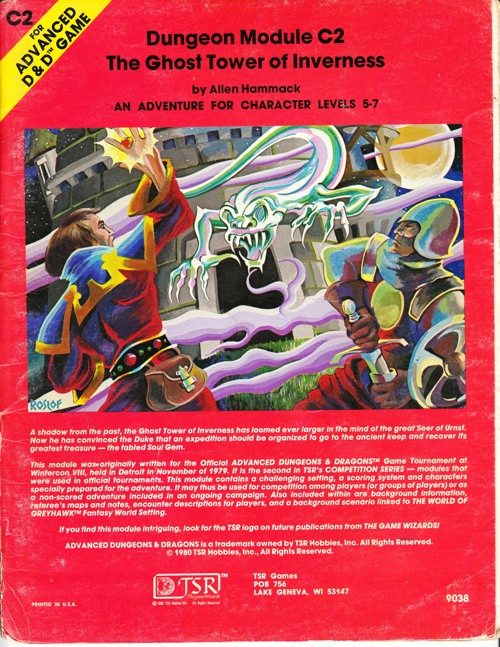 Okay, nothing basic about this one, people. C2 – The Ghost Tower of Inverness very specifically states it “has been designed for experienced players, and the mistake of equating experienced characters with experienced players should be avoided.” In other words, if you’re going to play it, make sure you’re not surrounded by newbies who don’t know the difference between a saving throw and how to calculate critical hit damage for a flail. I mean, come on, ya know?

Seriously, though, C2 is another one of those modules adapted from a campaign written for a gaming con, so you know it’s hard core, and likely to have the kind of attention to sadistic detail only us geeks can love.

Know you that in the elder days before the Invoked Devastation and the Rain of Colorless Fire, when the ancient peaks of the Abbor-Alz still thrust skyward sharp at majestic, there existed between the Bright Desert and the mount of the river Selintan a great fortress called Inverness. Know you also that here was said to dwell the great wizard Galap-Dreidel at the height of his power and glory. Most grand and terrible of all Galap-Dreidel’s work was the keep’s great inner tower; for it was there that the wizard’s most prized possession, an eldritch jewel known only as the Soul-Gem was said to rest. Legend says it was like a great white diamond and that it glowed with the brilliance of the sun. Stories said that the light of the gem dragged the souls of men screaming from their mortal flesh and trapped them within. Galap-Dreidel, it was said, harnessed this power and used it against those that opposed his will. They also say that he who controlled the gem could call forth the stolen souls of men and make them do his bidding.

Long story/short? Your party is hired/coerced by the Lord of the land to go seek out the tower and see about obtaining the gem for his use in his benign despotism. Anything for a bit of fun, right? Just consider that the module recommends a party of 5-10 characters of level 5-7. That’s some serious firepower, there – meaning that casualties should be expected. This one is full of monsters, and full of interesting tricks and traps that will take their toll on even the most experienced group.

Things to remember in the Ghost Tower of Inverness:

This dungeon has some real consequences, and it’s easy to see why it suggests experienced players. If you didn’t have a passing familiarity with the ways to deal with little things like, say, resurrection, or anti-gravity, you’ll learn the definition of fail real fast. All in all, a rousing little adventure, though it would have been nice to find a few more magical weapons before the end. Oh well.

While I’ve slowed the pace on these, have no fear faithful readers, more are yet to come. See you next time!

Taking Notes to a New Level — The Sketchnote Handbook

33 Geeky Insults You Can Use Almost Anywhere

1 thought on “The 10 Best Classic D&D Modules I Ever Played #6: A Hard Core Crawl in the Tower”