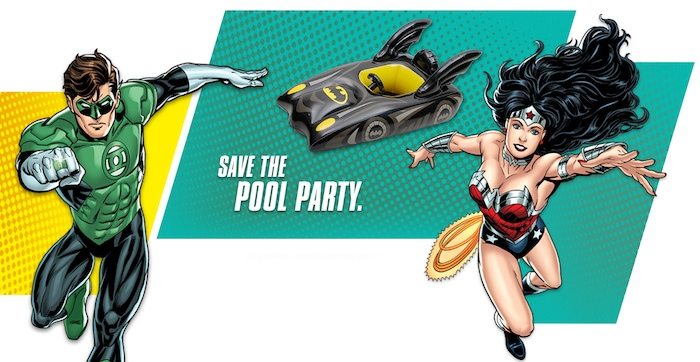 Much to the delight of geek moms everywhere, this summer Target has teamed up with Warner Brothers and DC Comics to bring a wide assortment of Justice League merchandise to stores nationwide. From Batman hooded towels to a Superman snack container, there are some truly unique products to be found in Target stores right now. (Seriously, where else will you find Wonder Woman’s invisible jet as a baby’s pool floatie?)

While most of the goods have a playful Silver Age feel to them, you will spot many Justice League characters sporting their New 52 costumes on signs around Target stores. And as Man of Steel gets ready to hit theaters in a couple of weeks, it’s easy to predict we’ll be seeing even more Superman merchandise in the store. Who knew Target of all places could become a comic book nerd’s go-to store for fun finds like a Batman or Wonder Woman camping chair?

According to the press release,

You might pretend to get the Wonder Woman sand bucket for your kiddos, but it’s okay if you’re really getting it for yourself. I made a big show of purchasing a shiny Wonder Woman placemat for my daughter, but who has two thumbs and has eaten all her meals this week on it? This mom.