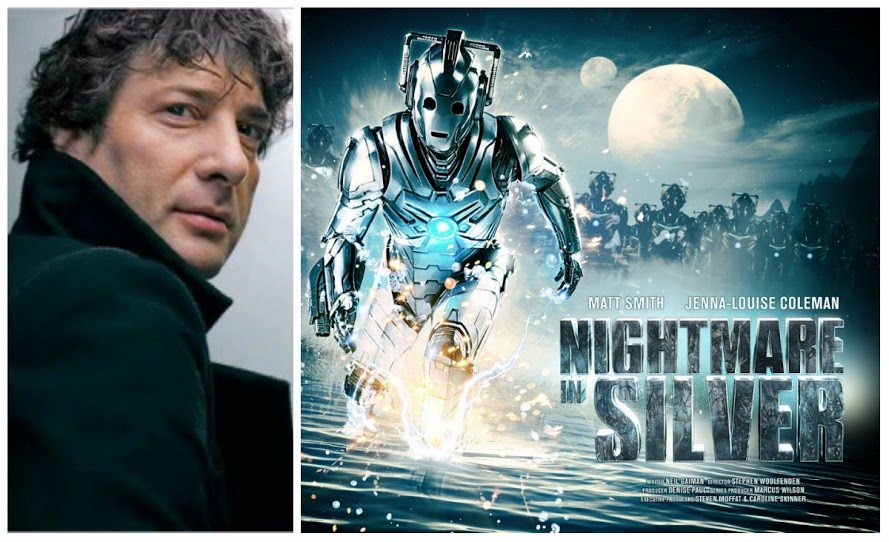 [I recently had a chance to participate in an interview with Neil and even ask a couple of questions myself. The following are quotes from that interview.]

Tonight, we get to see Neil Gaiman’s second outing writing an episode of Doctor Who. Given the popularity of his first episode — “The Doctor’s Wife” — expectations are high, and I can promise you this episode will not disappoint. Without spoilers, I can say that the new episode — Nightmare in Silver —  may not be as informative about the Doctor’s past, present, and future, but it brings the Cybermen back to their rightful place as one of the scariest Doctor Who villains ever.

Since the relaunch of Doctor Who, the Cybermen have gradually become less and less of a menace, and when put up against the Daleks, seemed to be tin foil pip-squeaks. Gaiman remembered a much more sinister enemy when his favorite Doctor — Patrick Troughten — would face them:

I remember Moonbase, the second outing I think it was of the Cybermen… and I was terrified of them. I was much more scared of them in a way than I was the Daleks because they were sort of quiet and they slipped in and out of rooms and it was very off putting.

Gaiman’s Cybermen are far more threatening, silent, and — because they are constantly upgrading — devastatingly fast than past incarnations. They look and act less like old steampunk Cybermen of a few years ago and more like sleek sports car cybermen.

These are Cybermen so dangerous that if you find one on your planet, you don’t just run, you blow the whole planet up.

I loved the idea of a Cyberman that was essentially so dangerous that if you find one on your planet, you blow up the planet. You know, planets are expendable but a Cyberman, if you can’t destroy it immediately, is not.

And before you ask, yes, he’s still busy but still willing to write more Doctor Who, given time and under the right circumstances.

I got a chance to ask Neil about his own feelings on technology and cybernetic augmentation. For example, would we ever see him sporting a pair of Google Glasses?

Almost definitely not because they look very, very silly and I was there at TED, the TED talks last month, and watched the nice Mr. Brin from Google get up there wearing his Google glasses and explain why being able to check your email while talking to people was the best thing in the whole world and I was not convinced.

But Neil is no Luddite, and certainly sees the benefits of technology, even invasive technology.

I can absolutely imagine myself with a huge number of artificial bits. As long as I sound like me, I don’t think I’d mind. I’m – you know, I’m ridiculously open minded about this stuff.

In fact, during the interview, he may have let slip a little too much information.

Neil Gaiman as the ghost in the machine? Be afraid. Be very afraid.

Paul and Storm Rock a Solo (Sort of) Concert