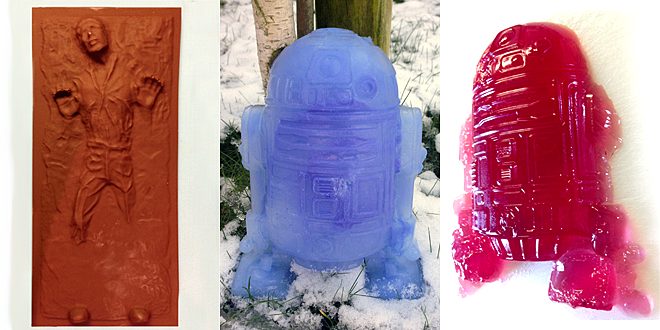 Do you ever look at geeky themed cooking and baking supplies and think to yourself, “it’s cool, but how much would it actually get used?” I know I do. I am the proud owner of a set of official Portal 2 cookie cutters and, epic as they are, how many occasions actually call for Portal cookies? I wondered the same thing about the new large size Star Wars ice molds available at Think Geek. How many things can you actually create with an enormous Han Solo in Carbonite silicone mold?

Turns out quite a lot….

The most obvious thing to create with an ice cube mold is naturally, an ice cube. Thing is, these molds are huge. Han Solo measures 10 inches tall (the mold itself is 11 inches long) and even the Millennium Falcon, the smallest of the three, is almost 8 inches long.

However, a few days after the molds arrived, the UK experienced an unseasonal snowfall, so my three year old son and I made ourselves some colored ice sculptures for the garden. By mixing a little milk and food dye into the water we were able to make brightly coloured figures that stayed in our garden for almost a week before melting.

If you live in a cold climate, you could create a long-lasting Star Wars ice display in your yard, although if you live in a neighbourhood where kids are likely to hurl things at your windows, I’d advise only putting these at the back as they are heavy, solid chunks of ice that could do a lot of damage if thrown. If you wanted to use them as ice cubes in a more traditional way, an ice Millenium Falcon would certainly look great chilling a big bowl of punch at a party.

The second thing I tried with the molds was using them with chocolate. As Easter was approaching I decided to create a giant chocolate Han Solo in Carbonite for my in-laws. The molds are enormous but providing you don’t fill them too deeply you can still create shaped chocolates that won’t break their recipients teeth, Han took around 200g of cooking chocolate to fill to a depth of a few millimetres. He looked great after he was (very carefully) turned out and he made a fantastic alternative to a traditional Easter egg.

Next up was an attempt at brownies as suggested on the ThinkGeek product page and the only test that went horribly wrong. Even with my old recipe for what we remembered as a fairly solid brownie with a consistency closer to cake, the finished product just couldn’t hold any shape and had to be scraped out of the mold. This did highlight one issue with the molds, they are not dishwasher safe. That meant scrubbing all the brownie mix out of Han’s many creases and crevices, just how I wanted to spend my afternoon.

The penultimate test was a tasty R2D2 jello. I was curious as to how well the highly intricate detail of R2 would show up in such a gelatinous format, but it turns out that jello is excellent at holding even small details perfectly. One minor issue involved actually releasing R2 from his mold. Luckily the molds are rectangular, forming a reverse impression of the mold on the back which could therefore be filled with hot water to coax R2 out of his hiding place. This task did however get quite wet, quite fast so make sure you do it before changing into any party wear. Once R2 was out he looked fantastic but was incredibly fragile due to the thin connections to his “feet”, make sure to release him straight onto the service plate you’ll be using as you will probably not be able to move him without breakage.

Finally a trip to my sister’s called for a Han Solo cake. The most important thing here was using LOTS of lubricant to make sure the cake releases easily from the mold after cooking, if it sticks in those tiny crevices Han will most certainly be losing body parts. One slight issue is that cake release lubricants pool in the mold so Han ended up without fingertips thanks to my generous useage, I suppose it’s all about finding a balance. I colored my cake mix grey to make it look more like carbonite, but that did have the side effect of making the cake a rather unappealing color.

Another issue is that it is difficult to ice a cake created in these molds as any icing will smother the details. I chose not to ice mine and instead highlighted Han with edible silver powder, it looked ok but photographed terribly which is why you’re not seeing it! If I attempt another cake from these molds, I will be spending some time researching the best way to ice it without losing all the details in the process.

So it turns out you can do quite a lot with a giant, silicone, Star Wars mold.

All the designs are oven and freezer proof which make them very easy to work with, although not being able to put them through a dishwasher is a real pain at the end of the day. Chocolate and jello were clearly the best projects in terms of showing the details from the molds, with ice in third place followed by cake – the catastrophic brownie effort doesn’t even make the list.

If you guys have created anything using silicone molds then let us know how it turned out.

The Star Wars molds were provided free for this review and are available from ThinkGeek for $15.99 each. 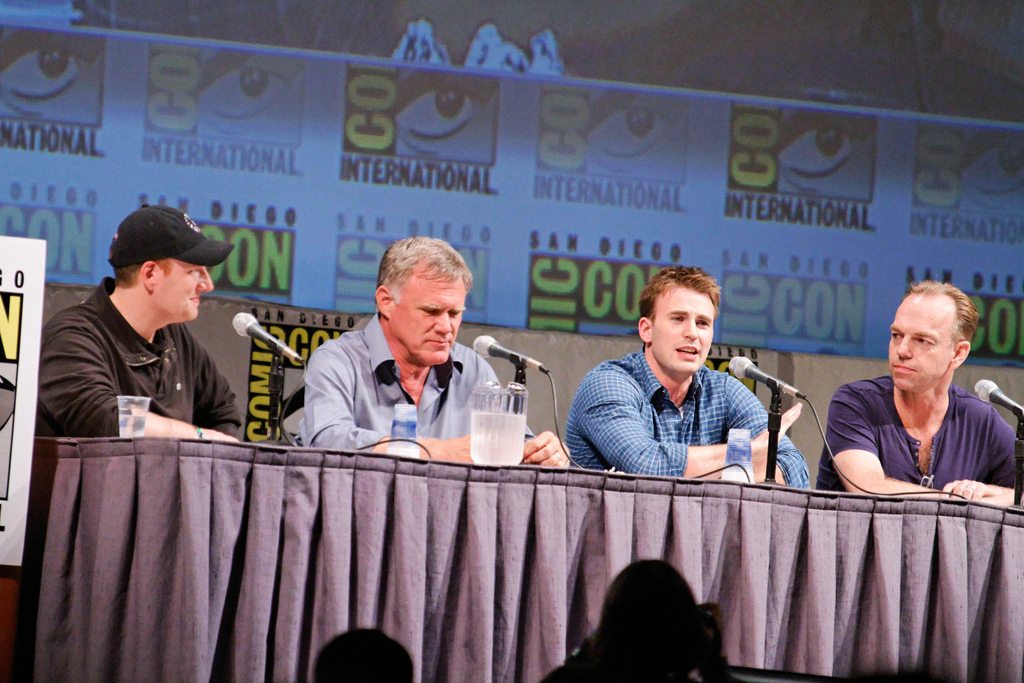 Convention Report: Would You Pay To Attend A Panel?

8 thoughts on “Star Wars Silicone Molds – Worth The Money?”