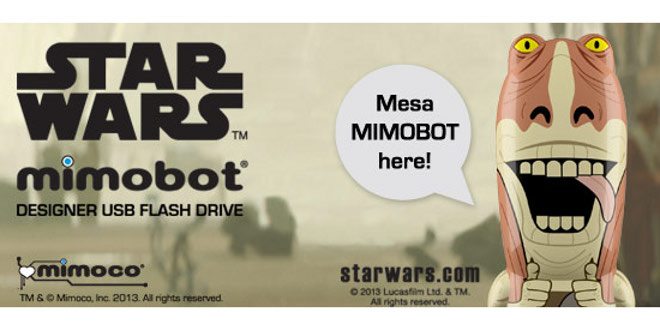 This year, the joke is on us, because the Jar Jar Binks Mimobot is a reality. Available starting April 1st as a limited run of 500 hand numbered drives, Jar Jar is available directly from Mimoco for $25 to $130 for 8 to 128GB.

Of course, not everyone loves Jar Jar (*gasp*), so Mimoco has added a few other licenses and characters this year. I saw a bunch of them at Toy Fair this spring, but the ones that stood out the most were My Little Ponies and The Presidents. Since February they have also announced a limited edition BMO from Adventure Time, and The Riddler from DC Comics. Sadly though, the Abe Lincoln thumb drive does not come as a vampire killer. Maybe next year.