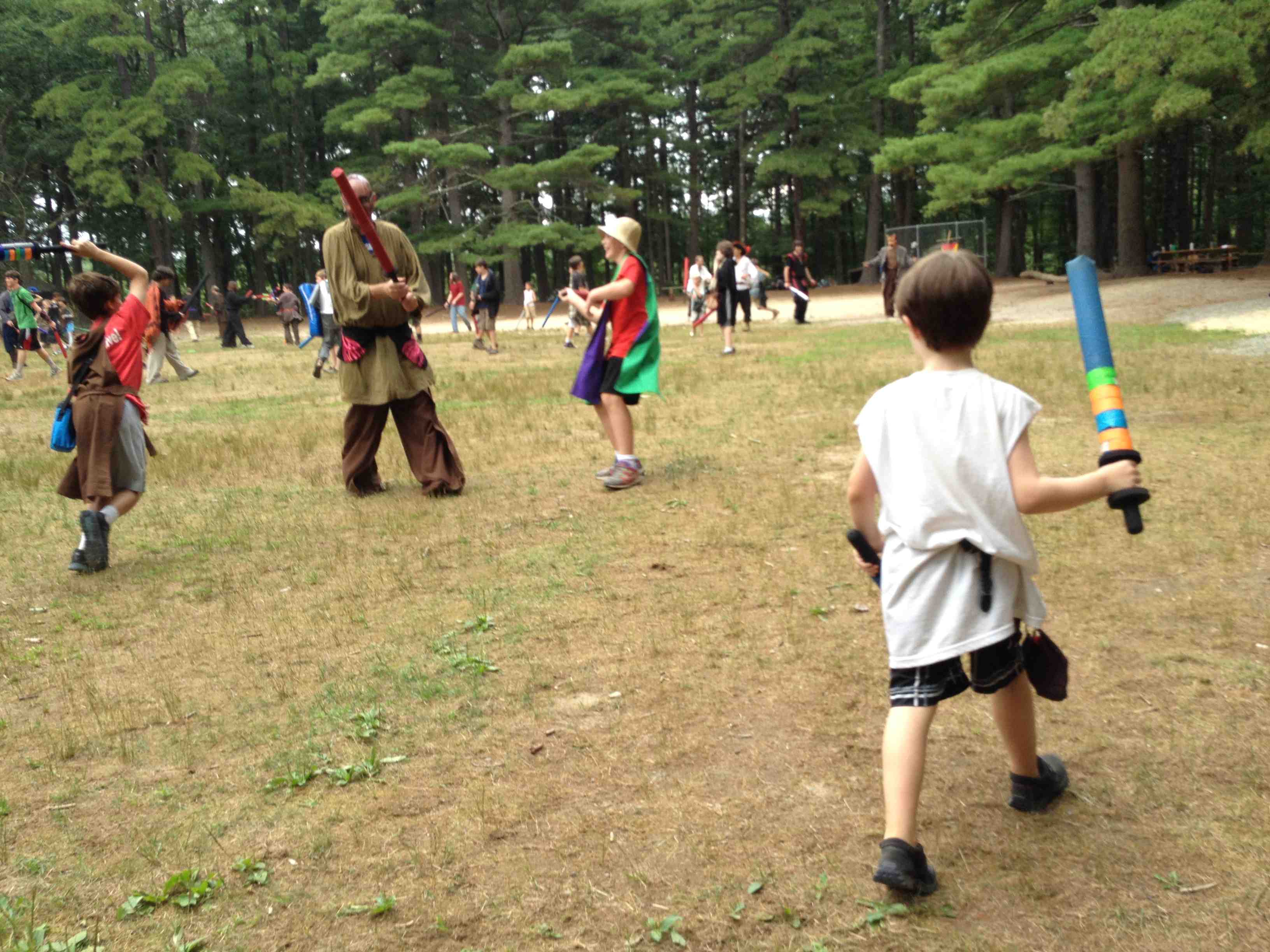 If your child is into role-playing games, or adventure games, or make-believe — and isn’t the kind of kid who’d enjoy soccer camp or football camp or a hardcore academic camp — then perhaps Wizards & Warriors Summer Camps and Adventures is the right match for him or her.

“Every child is a hero,” says Meghan Gardner, founder and director of Guard Up!, the company that runs Wizards & Warriors. “Just give them the chance to prove it to themselves so that they can grow into the hero they want to be.”

And indeed they can. I had a chance to visit the Overnight Summer Camp facility last summer, and watch some of the scenarios, puzzles and battles unfold. Each camper gets to choose a character and a costume, and think about how their actions will unfold and affect the story of the live-action role-playing adventure over the course of the week. Only Gardner prefers her brainchild be called an “educational adventure,” rather than a LARP.

For sure, I witnessed plenty of talking and strategizing amongst the kids, as they discussed what to do next during rap-sessions, led by an adult storyteller (as well as during mandated water breaks). But there’s plenty of running around with foam-covered “buffer” weapons and smiting one’s enemies, too. The foes happen to be teenage and adult counselors dressed in some creepy and cool costumes (and sometimes parents). I saw some gorgeous handcrafted masks, other “non-player” characters roaming about on stilts, as well as hordes of slow-moving undead zombie types, who were easier targets for the younger sword-wielding campers. (And when parents played the undead, they sure were fun to battle.)

The action, battles and situations tend to get more intense as the story lines develop over the course of the week. “Our stories are a child’s practice for real life,” Gardner says. “Wouldn’t such qualities as honor, courage, and compassion be valuable to the future leaders of our government and corporate industries? We like to think so.”

I agree. I recently had the chance to ask Meghan Garnder more about her camps, as well as what’s in store for 2013.

GeekDad: What’s new this year for the sleep-over weeklong camps?

Gardner: This year, the Wizards & Warriors Camp first session will have something of a steampunk flavor as the heroes assist Watson in his quest to find Sherlock who was last seen chasing a villain through the Gate of Destiny and is expected to be somewhere in the land of Sidleterra.

GeekDad: What’s your impression of the demand for this kind of programming? Is it more popular since last year? Are there forces at work that make the idea of Larping more acceptable as a kid-friendly activity now, compared to a few years ago?

Gardner: It’s my belief that activities that mimic computer games in aspects such as reward and progress, but that also get kids “unplugged” and physically and socially active, are gaining in popularity.

GeekDad: Is your camp a “LARP” in the sense most people understand what that kind of game is?

Gardner: I hesitate to call our camp a “LARP” because we focus on so much more than just an interactive theatrical aspect. Our camps are very educational and seek to encourage personal growth as a primary objective. Entertainment is inevitable, but not the sole purpose. Most of our campers and parents have never even heard the term “LARP” before coming to our camp. This is why we call ourselves an educational adventure.

GeekDad: What about the stereotypes against kids who might attend your camps?

Gardner: We often have people look at what we do and all they see are kids running around, dressed in costume, and playing pretend. Unfortunately, in today’s society, that is often deemed an insufficient way for a child or teen to spend their summer, despite that scientific studies show the absolute necessity for creative play in the healthy development of a youth.

GeekDad: So what’s the trick to get people to understand the value of your “educational adventures”?

Gardner: We try our best to educate parents and others about the “hidden” values of our story based adventures, and why they are integral to the growth of a children and of young adults.

GeekDad: So it’s about persuading skeptical parents what their kid might get out of one of your camps — say, a child who otherwise feels he or she doesn’t fit in at his or her school, a shy kid, an introverted kid, who need this outlet.

Gardner: We ask our parents to take a moment and imagine how their child will feel when, in a moment of strife, they discover their courage. When they stand before a villain and fight for those who cannot defend themselves. When they speak for those who suffer from lack of a voice. When they face failure and continue forward because they know, deep in their heart, that they can survive this setback and try again. When they bond with other kids who feel the same call to action and desire to be greater than the moment before them. When they celebrate their victory with an intense feeling of accomplishment—because they had a part in this story and they made a difference. And when they realize that learning is an intriguing, life long endeavor that is exciting to explore outside of the boundaries of school.

Wizards & Warriors Summer Camps and Adventures: More details
There are two types of Day Camps — Summer Day and Summer Quest — and one type of Overnight Camp. (There are also Winter & Spring School Break Adventures.) This is how they break down:

Summer Day Camps (coed, ages 7 to 9): Campers spend the week in our climate controlled training room facility in Burlington, in the suburbs of Boston. According to the website, “Heroes start on Monday morning by designing a character, complete with history, culture, and special skills. Our camp staff have a large room filled with props, masks and costuming to keep the campers engaged with intriguing stories and exciting adventures that teach them about literature, history, science, mythology, Latin, and other academic subjects which are important to solving the mystery.”

Summer Quest Day Camp (coed, ages 7-9 and 10-15): Campers will begin their adventures each morning at the Burlington facility or our other designated pick-up locations, where they will be transported to our 50-acre camp in Reading, MA. Also offered: A Quest Day Camp “NERF Zombie Camp,” a futuristic version of Wizards & Warriors where campers can use NERF Blasters.

Overnight Summer Camp (coed residential camp, ages 10 and up, with a special Counselor in Training program for ages 16 to 19): Campers begin their adventures the Sunday they arrive at a 50-acre camp in Reading, MA. This camp runs from Sunday evening to the next week’s Friday morning. “This is our most immersive summer camp experience with outdoor battles and encounters, late night events, and special events planned. All meals are provided. Campers reside in classrooms with cots provided. Campers are divided by age and sex and there are counselors housed with them.” Also available as a NERF Zombie Camp.

How Not to Grow a Beard Month: Beards for Boobs

Chateau Roquefort – Someone Moved My Cheese and I Love It!

5 thoughts on ““Every Child Is a Hero”: Send Your Kid to LARP Camp This Summer”