How does one go from being a Geek to becoming a GeekDad? For this GeekDad, the story is related to an image that was taken by the Hubble Space Telescope for the observatories’ 23rd birthday. When I was fresh out of college, I was given the opportunity of a lifetime, the chance to work on the Hubble Space Telescope (HST). I started by working with a team that built a system used in the testing of the scientific instruments on the ground and evolved that role into directly supporting the development and testing of new science instruments. I was sent out to Boulder, Colorado where the instruments for the next servicing mission were being developed, particularly, the next generation wide-field imager, the Wide-Field Camera 3 (WFC3). I knew from my start that the science and images taken by WFC3 would be extraordinary.

While I was living in Boulder, I met an extraordinary young lady working on her undergrad in Astronomy at the University of Colorado. We hit it off very well and when the time came for me to move back to Maryland and the NASA Goddard Space Flight Center I think we both knew the separation would be temporary. Over the months until I proposed to her I continued working on WFC3, testing its systems and getting it ready for flight. The wedding came and due to schedule slips, ended up occurring in the middle of a major test effort. We even took a week to be at home between the wedding and the honeymoon so that I could work some late shifts of the testing, having traded shifts around with colleagues so that I could take the time off.

After the honeymoon, my wife, GeekMom Helene,  got a job at the Space Telescope Science Institute in Baltimore and ended up working on WFC3 testing herself. We had a few shifts where I was taking data with the instrument and she was doing the science analysis right behind me. I eventually moved off of Hubble to support the James Webb Space Telescope but my wife kept working WFC3 as part of her duties, keeping WFC3 in the family. She worked the final thermal-vacuum test years later, after delays due to the servicing mission being canceled and the return to flight effort after the Columbia tragedy. It was while she was working this final test campaign that she was pregnant with our first son, who was delivered just a few months before the launch of Hubble Servicing Mission 4. We sat and watched the launch of Atlantis with our son on our laps watching that science instrument, of which we were fortunate enough to be a part, ride into space.

The image released for Hubble’s 23rd birthday represent just some of the science that has proven to be as extraordinary as had been anticipated by the team during all those years of development. Nebulas are areas of celestial birth, the places where stars form out of the swirling clouds of gases. In the visible part of the light spectrum, the nebula shrouds these stars as they are forming. However, like a giant ultrasound, the infrared channel on Wide Field Camera 3 allows us to peek inside the nebula and see these stars forming in a spectacular fashion.

I am extremely proud of the work I contributed to the success of WFC3. I was part of a very large and wonderful team of people, all of whom deserve recognition. Now the camera is in the hands of eager scientists who continue to use WFC3 to make extraordinary discoveries. Looking over this image and seeing the astonishing science in the beauty of the universe I can’t help but also be proud of my own journey from bachelor engineer-geek to a very proud GeekDad.

Because We Now Know That Pluto Is the Planet Arrakis 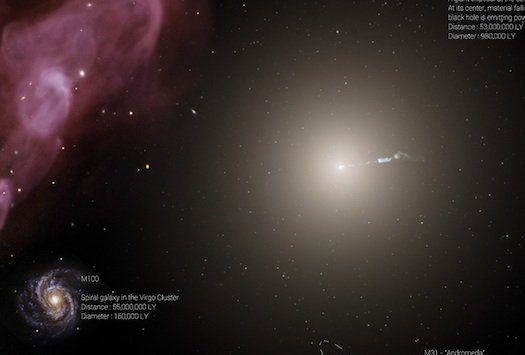 How Big Is a Galaxy? Milky Way Shown to Scale | Popular Science